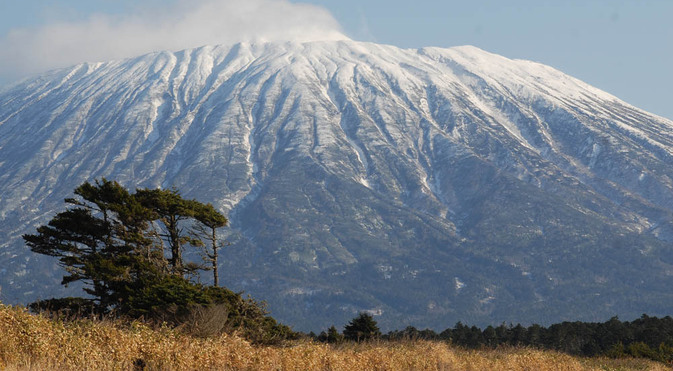 The islands of Kunashir and Iturup at the extreme eastern end of Russia offer an incredible range of recreational activities.

So far are the Southern Kuril Islands from Moscow (around 7000 km or 7 time zones) that most residents of central Russia wouldn’t have even thought of a trip to the natural treasure trove at the “end of the world.”  Yet for the adventurer, the difficult-to-access islands of Kunashir and Iturup, which are at the heart of a territorial dispute with Japan provides a traveller with some of the most virgin and unspoilt nature in all of Russia.

Kunashir Island’s most famous natural wonder is the Tyatya Volcano, which stands at 1819 metres above sea level and is a classic somma volcano, with a perfect shape. Tyatya, which is in the northeastern part of the island, is considered off the beaten track even for residents of the sparsely populated island. Easier to access is the Mendeleev Volcano, which is close to a settlement. Even the fittest of travellers need special training to handle the ardour of the journey as penetrating the wild bushes of the island can be a tedious task.

The island has a pristine and unspoilt lake named Kipyashee, which is in the crater of the Golovnin Volcano. The volcanoes on the archipelago are part of the world-famous Pacific Ring of Fire that stretches into Indonesia and includes a part of Mount Merapi on Java.

As a child, 34-year old Vladimir Larionov trekked to many of the volcanoes on Kunashir and the island of Iturup, but the resident of Yuzhno-Sakhalinsk feels that the most scenic place on the archipelago is Cape Stolbchaty. “The columnar basalt formations are stunning and the panoramic views of the coves are like nothing anywhere in the world,” Larionov says. The employee of an oil company on Sakhalin left the Kurils since he believed the only way to make a decent income on the islands was to be a tourist guide. “They’re a great place for a retired life to be in the midst of nature, but there’s not much to do for young people,” Larionov says.

Russian federal authorities have also spoken of the need to increase economic opportunities on the islands. Prime Minister Dmitry Medvedev even suggested setting up special economic zones to take advantage of their proximity to Asian powerhouses China, Japan and South Korea. Regional authorities in Sakhalin however feel the islands could attract high-value tourists to new resorts on the lines of the Maldives. High-value thermal spas may be one of the courses that the authorities plan to take tourism in the future, but at the moment, the raw and undisturbed nature is Kunashir’s unique selling point.

The island of Iturup is often referred to as the “Jewel of the Kuril Archipelago.” The Japanese, who occupied the island before the Second World War, built an aerodrome for kamikaze bombers on the island, making it the most accessible in the chain. The aerodrome’s location was chosen with an intention to keep enemy aircraft at bay. Flights to the island are often at the mercy of the weather but there are regular ferry services from Sakhalin.

The island is rich in natural resources and is believed to have large deposits of titanium. The Japanese were keen to extract minerals from the island and there is even a disused railway line rising 30 degrees to the top towards the Kudryavy Volcano. There were plans to transport the special mineral deposits by the volcano back to Japan.

Iturup’s roads are in a poor condition, but since the island is relatively small, it’s possible to go on long treks or explore using bicycles. The island remains one of the least explored in the entire archipelago and a series of surprises await the traveller. These include the Ivan the Terrible Volcano, one of the most active in Asia. On a summer day, there are very few sights more beautiful than the reflection of the volcano on the waters of the Lake Lopatsnoye, which sits its foot. Then there’s the Baransky Volcano, famous for a waterfall that consists of weak sulphuric acid.

One of the best reasons for a summer visit to Iturup is the virgin coastline and warm waters. From the second week of July till the third week of September, the deep bays on the island are warm enough to swim in. These are by far the cleanest and purest waters in the entire Kuril archipelago.

Getting There: The best base for a visit to the islands is the city of Yuzhno-Sakhalinsk, which is connected by daily flights to Moscow, Khabarovsk, Vladivostok, Seoul and Sapporo. There are regular flights to Iturup from Yuzhno-Sakhalinsk, but ferry services are the preferred mode of travel. Regular ferry services also connect Kunnashir with Sakhalin.

Permits: Foreign citizens and Russians not registered in the Sakhalin Region, need to obtain special border zone passes to visit the islands. The passes are issued free of cost by the Border Guard Service in Yuzhno-Sakhalinsk. Several travel agencies in Sakhalin offer package tours that include securing the necessary permissions.