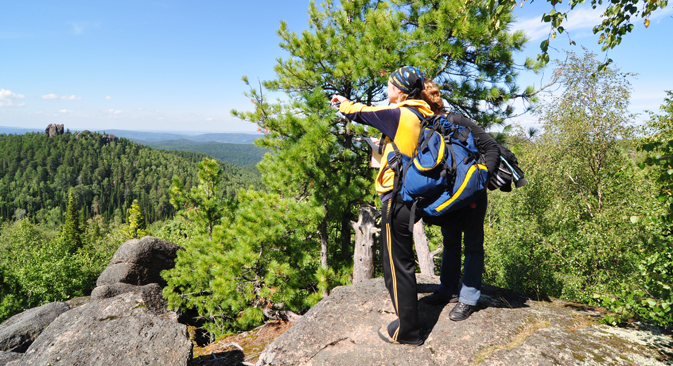 Every August and September, the Astrakhan Nature Preserve on the Volga Delta becomes home to the Caspian Lotus. SourceL Lori / Legion Media

RIR chooses the seven most unusual holiday destinations available for visitors to Russia: from horror tours around GULAG labor camps to swimming in lotus fields.

Russia is the perfect place for “deep tourism”—not only seeing another country, but also becoming immersed in a different culture. Gone are the days when the only tour packages available were sightseeing trips around a city and anything more adventurous had to be organized on your own: Now you can book planned-out tour packages to the most unbelievable places in Russia, with no trouble at all.

7 places in Russia to welcome Spring

The lotus is the sacred flower of Buddhism. People do not usually associate it with Russia, but with India and China instead. Nevertheless, every August and September, the Astrakhan Nature Preserve on the Volga Delta becomes home to the Caspian Lotus—the most northerly location in the world where the lotus flower blossoms. Here you will find the largest blooming lotus waters on the planet, measuring some 9 miles by 2 miles.

One day is enough to catch this natural wonder; a standard tour lasts 8–10 hours. Visitors are taken by motorboat as close as possible to the flowers, before hopping into rowboats that take them into the very heart of the fields, where they are allowed to swim in the Volga.

A new day is dawning on Wrangel Island: It is, after all, located precisely at the point where the Eastern and Western hemispheres meet. Wrangel Island is considered the “home” of the polar bear and has been a UNESCO World Heritage Site since 2004. Your expedition ship will move across the northeast part of Eurasia to the Bering Strait, before crossing the Arctic Circle and mooring at Wrangel Island.

Price: $925 for individual tours; $170 per person for group tours of at least five people

Visitors set out from Solikamsk and stop off at a number of places along the Glukhaya Vilva River, which was home to GULAGs such as Sim, Tsvetkovo, Rzhavets and Krasny Yar, among others. The tour offers rafting on local rivers, as well as a visit to a mammoth cemetery in Krasny Yar. The excursion is not the most comfortable you will ever go on, with two of the three nights being spent in tents at the labor camps—so you’d better be ready for a bit of a workout, in addition to this journey through history.

Epicenter of the Tungunska explosion in Krasnodar Region

Excursions to the epicenter of the Tungunska meteorite are rather varied and can be tailored to suit a variety of needs. Source: Lori / Legion Media

The first details about the unbelievably powerful explosion appeared in 1908, immediately after it had happened. Since then, nobody has been able to provide a definitive explanation for what exactly happened. Even today, more than 100 years later, there is still no clear answer about the cause of the event.

Due to its popularity, excursions to the epicenter of the Tungunska meteorite are rather varied and can be tailored to suit a variety of needs. For example, instead of the three hours it normally takes to get to the site by road, you can opt for a helicopter ride, which takes just 20 minutes. You can also choose to stay in a tent rather than a hotel. You do have to be in good shape if you want to go on this excursion.

The tour operators promise rafting, research and exploration of every possible theory about what exactly happened in this place over 100 years ago.

Mir diamond mine in Yakutia

The average temperature in winter at Oymyakov is around 58 degrees below zero. Source: Lori / Legion Media

Price: Depends on the tour package

When: All year round

Tourists who go for the “Diamonds of Yakutia” tour package visit diamond deposits and learn about the diamond mining and cutting processes. They are also given the opportunity to see one of the most spectacular man-made places on Earth—the Mir kimberlite diamond pipe located in Mirny, Yakutia. Development of the mine started in 1955. Its current pit depth is 1,476 feet, and the outer diameter is 3,937 feet. It is well known that helicopters are prohibited from flying over the pipe, as the difference in air currents would literally suck in the aircraft.

The pit is one of Yakutia’s most impressive sights: even the most ordinary pictures are truly fascinating. It is the only pit in the world that is visible from space, and it regularly finds its way into lists published in science journals of the most spectacular places in the world.

The Pole of Cold at Oymyakon in Yakutia

Hardly a year goes by without Oymyakon appearing in the news for new record-low temperatures. It was here that the coldest-ever air temperature was recorded—a chilling 96.1 degrees below zero Fahrenheit, with the average temperature in winter hovering around 58 degrees below zero. It is hard to believe that people actually live here (thanks to the extreme cold, they can live to the age of 120) and that there is a tourism industry.

There are three expeditions per season—in January, February and March—each of which lasts nine days. The maximum number of people per tour group is eight. During your trip, which is essentially a real ethnographic excursion, you will be exposed to the history and customs of the local people and have the chance to integrate yourself into the life and culture of the region. Oymyakon is the perfect place to test your mettle.

Kamchatka is known around the world for its volcanoes, salmon, bears, wilderness and extreme inaccessibility. Nevertheless, this 17-day tour to a high plateau surrounded by nine active volcanoes will give you a real feeling of adventure. There are trips to lava fields, climbing expeditions to the mouth of the Tolbachik Volcano and photo tours of the tundra.

Travelers will get an English-speaking tour guide, try out authentic Russian banyas (saunas) and even choose the difficulty of their route, depending on their level of physical fitness. You’ll have to rough it out a few nights on campsites, but the rest of the time will be spent in cozy hotel rooms. Most of the route must be traversed on foot, although jeeps and trucks will deliver you to separate parts of the plateau.