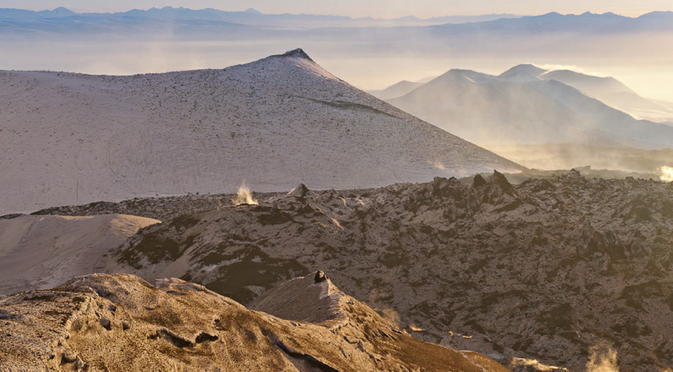 Kamchatka is a region that needs to be explored at leisure and if you’re making the trip all the way to the peninsula, it’s worth spending a few weeks. Source: Strana.ru

The Kamchatka peninsula in the Russian Far East is one of the last remaining pristine wilderness areas on earth.

The name Kamchatka conjures up images of bubbling hot springs, a myriad of snow-clad volcanoes and pristine rivers blessed with salmon in the summer and buried in layers of ice and snow in the winter. One of the largest stretches of wilderness in the world, the Kamchatka peninsula borders the international time line and its capital Petropavlovsk-Kamchatsky (Petropavlovsk) is closer to Tokyo and Seattle than it is to Moscow. So wild are most parts of the 1000-kilometre long peninsula that locals fondly say that Kamchatka has no roads, just directions.

The region’s isolation and lack of infrastructure can be both a blessing and a curse.  Kamchatka’s nature is untouched and largely free of commercial tourism. On the other hand, it is next to impossible for an independent (and budget) traveller to get around without the services of a tour agency.

Petropavlovsk, which dates back to the 1740s, was founded by Vitus Bering, the Russian captain, after whom the famous straits that separate Russia and Alaska are named. The city on the Avacha Bay offers great views of 2 volcanoes and a whole range of snow-capped peaks.  Little else besides its beautiful location sets Petropavlovsk apart from others small towns in the former Eastern bloc, which all have their fair share of dull Soviet architecture.  The region’s capital is, however, a good base for trips to different parts of the peninsula, many of which require the services of a helicopter.

Kamchatka. At the end of the world

If you’re short on time, the Avachinskaya and Koryakskaya volcanoes, which are visible from Petropavlovsk, are the easiest to access. It takes a fit person around 6 hours to climb up the Avachinskaya, which stands at 2741metres above sea level, while the Koryakskaya (3456 metres above sea level) is more demanding and would set the fittest of hikers back by at least 12 hours. Like most parts of the Russian Far East, the weather changes as quickly as the mood of a beautiful woman, and thundershowers can come out of nowhere on a clear August morning. The views of the sea, the surrounding lush green landscape and some of the wildest terrain in the world are worth the time, effort and patience.

Kamchatka is a region that needs to be explored at leisure and if you’re making the trip all the way to the peninsula, it’s worth spending a few weeks.

Valley of the Geysers

No trip to the peninsula would be complete without a visit to Dolina Geyserov (Valley of the Geysers). The valley of the Gesysernaya River is part of the Kronotsky bio reserve and has over 200 geothermal pressure valves that fire out steam, water and mud. There are several walking tours in the area and it is easy enough to explore much of the valley in a day but getting there is the expensive part.  The valley is 200 kilometres away from Petropavlovsk and best accessed via helicopter. A tour would set you back easily by around $600.

To see one of the most isolated and hauntingly beautiful places on the peninsula, Tolbachik, one would have to penetrate some of the thickest forests in the world and cruise on the river. The Plosky Tolbachik volcano has a 3-kilometre crater and is surrounded by some dead forests that were killed by a series of eruptions.

The surroundings of the still-active Tolbachik volcano give a great idea of how the landscape of the moon would look like. The Soviet Union tested its moonwalker vehicle in the area before sending it into outer space.

There have been a series of recent eruptions from the Tolbachik volcano and tours to the area can be cancelled depending on the situation.

Kamchatka is famous for its wildlife and the best time to go wildlife watching is in the month of August. Bears descend on the Kurilskoe Lake, which is at the southern edge of the peninsula, from the Yuzhno-Kamchatsky range of mountains to feast on the sockeye salmon, which spawn in nearby steams.

It’s also possible to get a glimpse of gracious Steller’s sea eagles that fly around the lake.  August is the best month to spot these largely brown birds, which breed on the Kamchatka peninsula and fly towards Japan for the winter.

The Kurilskoe Lake, with a radius of 77 kilometres, is surrounded by volcanoes and is absolutely unspoiled, although commercial tourism is slowly starting to rear its ugly head in the area.

Like many parts of the peninsula, Kurilskoe is best accessed by helicopter from Petropavlovsk. It is theoretically possible to travel independently to the area, but the stories of tourists being killed by bears are not uncommon. Going with experienced local tour guides is often the best bet.

Facts for the Traveller:

There are daily flights from Moscow to Petropvalovsk-Kamchatksy (around 9 hours).  The main air hub for travel in the Russian Far East is Khabarovsk, 2 and a half hours away from Petropavlovsk. Khabarovsk has regular international connections to cities in China, Japan and South Korea

Several tour agencies are based in Petropavlovsk and offer a range of trips to different parts of the peninsula, which include food, stay and permits for restricted areas.

Explore Kamchatka has been operating tours since 1999 and focuses on innovative and eco-friendly tours.

Lost World, which has been around since 1993 also arranges trips to settlements of indigenous people, dog-sledding tours and heli-skiing in the winters.