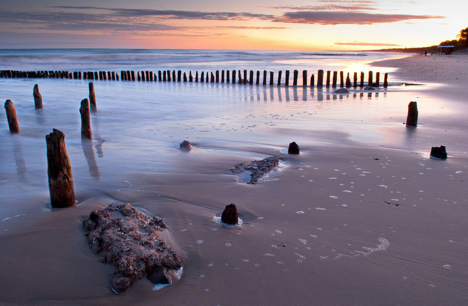 For over a thousand years people have been trying to save the Curonian Spit from three principle foes — the water, the wind, and themselves. Source: Anton Agarkov / Strana.ru

At 25 square miles, the national park in the Kaliningrad region, is one-sixteenth the size of Russia's capital.

The windblown sand drops to the ground in even thin lines, peaked like cardiograph readings showing a heartbeat. The heartbeat is so pulsating that it looks like the heart might burst out through the ribs. The Curonian Spit is lined with thousands of these sandy cardiograph streaks, as though recording the heartbeat patterns of the people who live here — flickering every second like tiny lines in the sand.

The sword-shape of Curonian Spit runs from Zelenogradsk in Kaliningrad Region to Klaipeda in Lithuania, dividing the salty brine of the Baltic Sea from the freshwater of the Curonian Bay. The emptiness gives way to pine forest, birch, and meadows swathed in mossy tundra and wetlands the size of a Moscow suburb.

At 25 square miles, the whole national park here is one-sixteenth the size of Russia's capital: it measures 321 feet in one direction, and between .25 and 2.36 miles in the other.

The best travel option from Kaliningrad is to take Bus №593 from Kaliningrad to Morskoy Village, which involves a change at Zelenogradsk. The route takes you along the length of the Spit. The journey time is four hours, with tickets going for around €6 ($8).

For over a thousand years people have been trying to save the Curonian Spit from three principle foes — the water, the wind, and themselves. Ancient Baltic tribes had their pagan worship groves here, and, later, Prussian kings kenneled their hunting packs here.

Then, in the 18th century, most of its area was given over to a royal park called The King's Woods. This status would later save it from the massive deforestation that occurred on the rest of the Spit.

The deforestation sparked an ecological catastrophe: the sand caused desertification and the formation of “wandering” sand-dunes that gently amble along the peninsula’s coast. Even today this destructive process continues, making the natural eco-system of the peninsula fragile and vulnerable.

For this reason, the Curonian Spit National Park was set up here in 1987 — one of Russia's first national parks. People say that if you totaled up all of the materials and labor costs thrown at this project over the years, it would be the most expensive environmental project known in history.

“I love fishing here. We used to come here for flounders when I was just a kid,” says Vitya, a young red-nosed fisherman. “Back then we didn't just catch fish, we used to bake crows! Nah, honestly! We'd lay our fishing net out on the ground and bait it with fish. We could catch more than a hundred crows a day.

Then we'd pluck them, chop the heads and legs off and sell them at the market. Of course, the buyers didn't know they were buying crows! We even made up a special name for them — we called them ‘Prussian Doves!’”

As the sun goes down on spring evenings, the beating of wings drowns out even the fall of the waves. Hundreds of thousands of birds fly over the peninsula every day. The Curonian Spit is an enormous bridge for birds. The migration routes of more than 150 bird species run past here, as they fly from Northern Europe to the South and to Northern Africa. During the migration period, millions of birds fly the Spit.

The Curonian Spit National Park is home to Europe's oldest (1901) ornithological station, Fringilla, which is located at the Rybachy village (Fisherman's village). Fringilla is the Latin genus for finches — one of the most common birds in the Curonian Spit. Ornithologists set up the world's largest bird-nets (50 feet high) at Fringilla during the migration season.

During the peak season, these nets sometimes “harvested” 8,000 birds per hour. All the birds were weighed, inspected, ringed, and then released back into the wild.

“The Curonian Spit is a special and unique place,” says Anna, a villager at Rybachy village, “but that's not what brings people here. Visitors come to experience nature — not wild nature and not groomed nature, but more like human nature! For many years the people and the Spit have grown up alongside each other as brother and sister: they may tussle and argue, but eventually they realize that they love each other. No, really — they do."

There are plentiful bed-and-breakfast lodgings, tour camps, guesthouses and hotels in different categories on the Curonian Spit. They are all located in small villages — Rybachy, Morskoy, and Zelenogradsk. Prices vary from €10–200 ($13–267), depending on the kind of accommodation and the season. You will almost always find somewhere to stay, but it is still better to book ahead to get your first choice.

"This is where you'll discover the real nature of humanity. It's reflected everywhere — in the rocks, the waves, the trees," she added. "It's why we came here to live. This is where the sand sings and the forest dances...”

The pine trees are woven into rings and hearts, convoluted spirals bending down to the ground — a strange natural phenomenon that locals call “the dancing forest.” This patch of hundreds of trees suddenly opens in the middle of the rest of the forest: turn along the path and you will find bizarrely-shaped trees all around you. No one has been able to explain why it happens. People say that the dancing forest follows the movement of the sands.

The “singing sands” are yet another strange local feature. Due to their unusual crystalline forms, the sand particles emit characteristic sounds on contact with the wind — sounds that are nothing like the usual rustle.

The sand sings under your feet, runs under your heels, bays at the dogs and echoes the lapping waves; its sound is carried far along the Curonian Spit. All you need to do is take a single step to hear it — or just not move at all.

You can run, or jump, or watch the dunes in silence, and you will still hear the sand everywhere. It forms waves that become some of the biggest sand dunes in the world. “The Heights of Eff” and “The Müller Heights” are the names of dunes here that can grow taller than 195 feet.

“I was born here, and when I grew up I moved to Kaliningrad. Then I came back. There’s nothing for me to do in other countries and cities, as long as I can live here,” says Vladimir, a park worker. “We have everything — the sea, hills, deserts, forests and tundra. And, by the way, a sole fish with eyes leaning on one side isn’t that tasty. But the most important thing is that we have tranquility, which can only be found in nature…”

The best time to visit the Curonian Spit is from May to November — there are no cars, the sea is calmer, and the pussy-willow blossoms are in bloom along the shores.