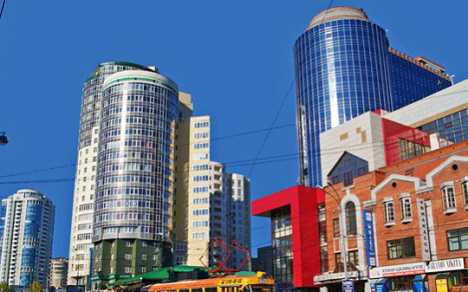 Yekaterinburg beyond the Ural Mountains, is Russia’s first city in Asia. It is known as the place where the Romanov dynasty was wiped out.

During the Soviet era, the city in between Europe and Asia (then known as Sverdlovsk) was a center of industry and its many factories belched out smog and fumes. Today Russians and foreigners come to see the home where the last tsar, Nicholas II, and his family and servants met their end at the hands of the Bolsheviks in 1918.

This city feels like a mixture of Russia’s two biggest cities: it’s got the hustle and bustle of Moscow combined with the pre-revolutionary architecture, water and green spaces of St. Petersburg. This side of the Urals, the city authorities seem to have made more effort to preserve the city’s wooden houses, which nestle side-by-side with towers and two-story buildings, giving the city a different feel than many others in Russia. All in all, Yekaterinburg is a rather pleasant place.

Yekaterinburg's International Airport is called Koltsovo. The cheapest way to get the city center is Aeroexpress ( $1 ). The schedule is available on Koltsovo Express .

Yekaterinburg is a city for wanderers: My friend Juliet and I strolled down the canal, which features several interesting works of art. We passed a giant keyboard set in stone by the water (perhaps a testament to Yekaterinburg’s up and coming place on the business scene) before moving on to the Beatles corner. Although I remain unsure why Yekaterinburg has a corner dedicated to the Beatles, the area, which features a mural and messages on a wall, is nevertheless a quirky addition to an attractive city.

The Church on Blood built in 2003. Source: FocusPictures

Yekaterinburg has a great range of shops and restaurants, and for those coming from Moscow, they seems like incredibly good value. A three-course lunch of salad, pizza and dessert for two came to 350 rubles. The people are also friendly and were happy to give us tips on where to go; in one rather empty bar, the waiter told us that it was better to leave his establishment for another a few streets away. New Bar (recently opened as the name implies) has a cocktail menu that is extensive and delicious. In an attic above TGI Friday’s (yes, Yekaterinburg has one of those too), this place has a St. Petersburg feel with books piled up on shelves and old film nights.

The Lonely Planet guide laments the lack of budget accommodation in Yekaterinburg but a friend and I found a little hostel near the center called Meeting Point. It features eight beds crammed into a small apartment and a friendly hostess who will point you in the direction of all there is to see and do.

Of course, the reason that many tourists visit this city on a stop-off from the Trans-Siberian is not the food or quirky sites, but to visit the place where the royal family died. The Ipatiev house where the deed was done was torn down in 1977 on the orders of Boris Yeltsin – then a party official in Sverdlovsk – who did not want it to become a shrine. The church that now stands on the cellar where they met their end now has the opposite effect – it is vast, unmissable and crawling with pilgrims.

It is hard to imagine what the area might have been like on that night in 1918, as any remnants of the old house are completely gone. Instead, there are shrines to the 7 members of the royal family who were shot in a crypt below the body of the main church (presumably constructed in what was the Ipatiev house’s cellar) and a traditional Orthodox church above. The church itself is grand, but not especially remarkable except for the fact that it supposedly houses the most expensive icons in the country.

The city of Yekaterinburg at night. Source: Getty Images/Fotobank

Equally interesting for those on the trail of Russian history is Ganina Yama just outside of Yekaterinburg. As with the Ipatiev house, this place, where the bodies of the family and servants were buried, has also become a place of pilgrimage – particularly after the royal family were canonised by the Russian Orthodox Church in 2000. Bus 17 leaves from the station to the monastery; there is also a special bus that will take you to the site and back in less than three hours for 500 rubles.

Built in the style of an ancient Russian village, the churches at Ganina Yama are made of wood and topped with gold domes: the setting is entirely fairy-tale. This is a working monastery so women are asked to wear scarves on their heads and aprons that cover their legs (women are not allowed to wear pants – long skirts only). Free tours are given at the monastery but it is worth noting that they are only in Russian and focus on the religious aspect of the churches on the site, rather than on the historical.

Interestingly the actual mineshaft where the family was buried and covered in acid is surprisingly lacking any sort of monument at all apart from a cross nearby; the actual site itself is simply a grassy hollow in the ground marked with a flowerpot. It’s hard to grasp the importance of this place with the glossy, shiny new churches almost detracting from a site that many consider one of the most important in Russian history.