“Islands of Riches” off Vladivostok 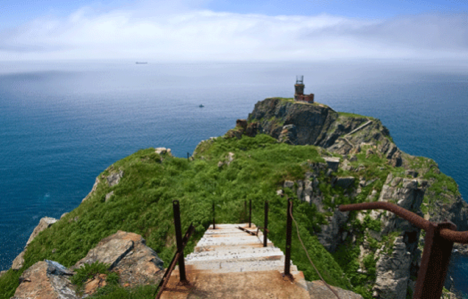 Russky, Popov, Reyneke, Rikord and other smaller islands, which are part of the Eugénie Archipelago, offer a curious mix of history and splendid nature, to go along with post-APEC 2012 modernity.

Vladivostok is on a peninsula that runs into a series of islands: Russky, Popov, Reyneke, Rikord and smaller ones, all of which are part of the Eugénie Archipelago. This name was given to the archipelago in the 1850s, before the founding of the Russian outpost of Vladivostok, by the French, who were the first Europeans to put the islands on the map.

Each of these islands has things to offer to divers, fans of untamed nature, and aficionados of history—from ancient to modern.

A Tour of the Soviet Forts on Russky Island

The simplest thing to do is to make one’s way to Russky Island, the largest and closest  island to Vladivostok. A bridge connecting it to the mainland was completed in 2012. The city and the island are separated by the Eastern Bosphorus Strait, which was named after the Turkish Bosphorus. With a wooded area of around 100 square kilometers, the island effectively shields Vladivostok from the south, so shortly after the Russians arrived in Primorye, it became part of the Vladivostok fortress, whose forts and batteries are spread out over a massive area. In the Soviet era, the island held numerous military units, and even the inhabitants of Vladivostok (a closed city at the time) had to get a special permit in order to visit it.

Today, the barracks have given way to the buildings of the Far Eastern Federal University. The new campus, like the bridge to Russky Island, was built in 2012 on Vladimir Putin’s initiative. The 2012 APEC summit was held on the island, and now educational activities are starting there: students and instructors cross over from the mainland to Ajax Bay. Russky Island has 20–30 kilometers of asphalt roads and the remaining roads are still unpaved. The ruins of imperial and Soviet barracks and hills torn up by underground utility systems are scattered around the island. In addition to the university, Russia’s largest oceanarium is being built on the island. Visitors particularly like the Voroshilov Battery museum. Huge 305 mm caliber artillery towers from the “Poltava” battleship were placed on Russky Island in the early 1930s to thwart a possible Japanese attack, and they remained intact until 1997. Under the towers are some underground stories, which can also be accessed.

The island boasts a number of picturesque bays, where local residents swim and fish. However, Russky Island is still relatively unexploited. Except for the FEFU campus and a few small villages, the land there is still partially wild with mountains, old military roads and occasionally remembered hunting trails. In the future, as the local authorities say, the island should become a full-fledged region of Vladivostok, traversing the route from Kronstadt to Manhattan.

Beyond Russky Island are the Popov and Reyneke islands, which during periods of navigation (spring through fall) can be reached by regular passenger motor ships (see  pereprava.su for schedule). These islands have fewer inhabitants and have become somewhat populated only in the summer, during the beach season. Popov Island houses the Far East State Marine Reserve. Reyneke is home to ruined barracks, where Ilya Lagutenko, the rock star and Vladivostok native son who is leader of the group Mumiy Troll, did his military service in the 1980s. Both Popov and Reyneke abound in appealing beaches, and the ocean there is clean and warm from June through September. In terms of seaside relaxation, Rikord Island is even more picturesque, but there is no regular transportation there (instead, one may rent a small boat through the local website farpost.ru ). It is even harder to get to Furugelm Island, Russia’s southernmost island, which lies within the marine reserve.

A Lotus Field on Putyatin Island

Eastward from Vladivostok lie other islands, the largest of which are Putyatin and Askold. Around 1,000 people currently live on Putyatin full-time. At the turn of the 20th century, the island housed porcelain and brick factories belonging to the entrepreneur Alexey Startsev, who was well known in the Far East (many buildings in Vladivostok are laid with Startsev bricks). On the island there was even a horse-drawn railway. In Soviet times a state fur farm and fish factory were active there. Nowadays, Putyatin is popular on the tourist circuit. The island’s star attraction is Gusin Lake, where Red Book Komarov lotuses grow—these are the most beautiful water flower and the symbol of Buddhism. Although administratively the island falls within the bounds of the closed military city of Fokino, access to Putyatin is not restricted: a ferry operates from the village of Dunay.

A Lighthouse and Wild Deer on Askold Island

It is more complicated to reach the horseshoe-shaped Askold Island, which is located farther offshore than Putyatin. This island has a rich history. It was the site of an 1868 conflict between the Chinese, who without authorization found gold on the island, and the Russian authorities. This incident sparked the “Manzovsky War” (the local Chinese in Primorye were called “Manz”). To repress the Chinese “khunkhuz” warriors, who had burned several Russian villages, the Russians had to mobilize the regular army. In Soviet times Askold contained a complete military town with schools and hospitals, but now the island is nearly uninhabited—all that remains is a lighthouse, and wild deer that roam the island’s forest.

Legends of Shamans and Cherished Places on Petrov Island

One of the most legendary islands is Petrov, which is located on the eastern coast of Primorye near the village of Kievka (around 200 kilometers from Vladivostok via the southern ranges of the Sikhote-Aline). It is within the bounds of the Lazov reserve, so in order to take an excursion to Petrov, visitors must get advance permission from the reserve’s administration, which provides a motorboat for the trip. There are plenty of things to see on Petrov: a rampart that remains from the enigmatic Bohai kingdom, and a yew grove that is unique for its density. Many mystical beliefs are connected to the trees, stones and springs of Petrov Island: a shaman’s face protrudes from the core of one of the trees, spring water helps women get pregnant, and tree branches bend in the form of a Chinese hieroglyphic signifying “eternity.” It is said that on the island mechanical watches often stop and mobile telephones shut off for no reason.

Vladivostok itself has a number of small islands: Oslinye Ushi (from some perspectives it looks like a sinking ship); Skrypleva, where the oldest local lighthouse is and where during World War II women anti-aircraft gunners served; Kovrizhka, which is reminiscent of a huge whale carcass. The local residents tell many stories about this, but it is now hard to distinguish between fact and fiction. It is easy to get around these islands with a motorboat or sailboat.