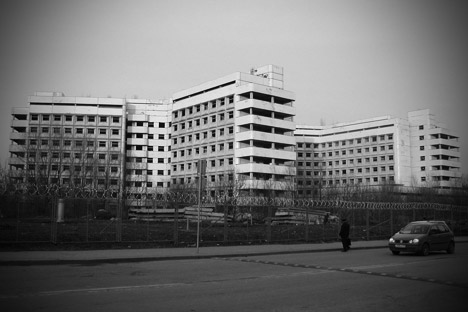 The Khovrinskaya abandoned hospital is on a list of “creepiest places on the planet.” Chernobyl ranks only a few slots ahead of it. Large-scale construction on KZB started in 1981.

The structure was originally to include 1,500 beds, a polyclinic, laboratories and helicopter landing pads. However, it turned out that the site was a poor choice.

The pavement did not hold up, and the nearly completed hospital the size of a city started slowly sinking into the groundwater. Consequently, construction was halted.

An introductory guide to Moscow’s graveyards

The city authorities still have not been able to decide what to do with all of this. On the other hand, Satanists quickly started gravitating to the site.

One sect claimed responsibility for the disappearance of people and animals in Khovrin. Cult followers allegedly used dogs and beggars for blood rituals.

A legend arose in Moscow saying that the police launched a raid on sect members and chased them into a tunnel and then shot the Satanists, who were unspeakably glad about this, for they went straight from the tunnel into the arms of the prince of darkness. To this day, on dark winter nights one can hear a chorus of them singing in the tunnel.

Every year, dozens drawn to the place in search of adventures inevitably break legs, arms and necks. It has become a pilgrimage destination for goths, punks, emos and others.

The hospital is full of holes, depressions, open elevator shafts and protruding fittings. The police regularly pull adventure seekers out of air shafts in the basement or from the attics, where they hide from security guards.

The main ghost of the hospital is considered to be Alexey Krayushkin, who jumped off the roof because of an unrequited love. One floor of the building houses a sort of memorial: an entire wall is covered with graffiti whose overall message (in both poetry and prose) is, “We will remember and mourn.”

The name of this district comes from the word “ostanki” (remains): the television station building was erected here on the site of an old cemetery.

About 500 years ago, the notorious Old Woman of Ostankino first appeared here, when she came to the ruler of the Ostankino village, the boyar Satin, and forbade him to till the land because it agitated the dead. The old woman was chased out and the villagers tilled the land; after this, the boyar fell into disgrace and was executed.

The Old Woman of Ostankino also appeared to:

The Tsar Paul, who came to Ostankino. She said that Paul would not survive until spring, and she was telling the truth—he did not survive.

Alexander II, who was passing through Ostankino. She said he would perish at the hands of an infidel. The emperor was killed by a member of the leftist group, Narodnaya Volya.

In October 1993, a few days before the assault on the TV station, the old woman again appeared in Ostankino and said that it would smell of blood there. Soon after that, it did indeed smell of blood.

The old woman was also spotted before the 2000 fire at the Ostankino television tower, when four people were killed.

Urban legend has it that Stalin’s chief of the secret police, Lavrentiy Beria, would snatch pretty women up from Moscow’s streets at night and take them home.

In the morning, having dishonored the beauties, he would shoot them. Now, this tainted house is the site of the Tunisian embassy, and in it someone scatters papers from a safe around a room, and footsteps echo in the hallways at night.

So far, no one has been able to catch a glimpse of a person. Diplomats have supposedly requested a new building, but their request has been denied.

Darya Saltykova, who is popularly known as Saltychikha, spent 30 years in confinement here for the particularly gruesome murder of 74 serfs (counting only the proven cases!). Catherine II said that Saltychikha did not deserve to be called a woman and could be called only a monstrosity of humanity.

Even in prison, Saltychikha held on to her wicked tastes, and being unable to torture, burn and kill living people, she yelled at and spit on them from behind bars.

She died in prison. People say that Saltychikha’s ghost still appears in the vicinity of the convent. Encountering her presages an impending death.

Created by the director Tairov, the Chamber Theater was rebuilt in the 1950s. As a result, the new part of the building ended up on the site of the cemetery of the John the Apostle church.

Tairov did not grasp this, but it is said that his widow, the leading lady Alisa Koonen, cursed the theater in her heart and died in 1974. Then it was as if a tornado hit: Productions were failures and the audience either hissed at shows or did not attend them. Koonen’s ghost still wandered the halls.

In 1991, the site was sanctified and the ghost disappeared. According to legend, before that, during a performance, a tropical butterfly of unearthly beauty suddenly appeared, circled around the stage and then flew away. Rumors started soon after that, saying Koonen’s soul was bidding farewell to the theater.

Some people think that the name “Golosov” comes from Volos (Veles)—a pagan deity that ruled over the world of the afterlife. According to another version, the Golosov ravine has this name because the voices (“golosa”) of people who have entered the ravine and not returned can be heard from there.

During excavations in the vicinity of the ravine, workers uncovered the remains of ancient settlements. After that, the ravine became even more popular among enthusiasts of the afterlife and the occult.

The ravine has always been considered a wicked place. In the 17th century, according to some sources, an entire squadron of Tatar horsemen came out of the ravine and went to the gates of the Kolomensky palace.

The riders were arrested and interrogated. The Tatars demonstrated that they belonged to the army of the khan Devlet Girey. There was just one problem: This khan had gone to Moscow around a hundred years earlier, in the mid-16th century.

In the 19th century, newspapers wrote about numerous citizens who had mysteriously disappeared around the ravine.

In 1832, Moskovskie Vedomosti reported on a peasant who at the bottom of the ravine had encountered uncommonly tall people dressed in hides, who emerged from the deep fog and then quickly disappeared.