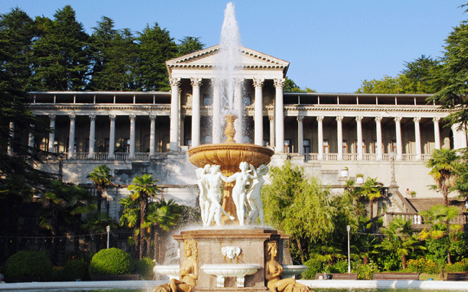 Since the 20th century the city has been an inviting site for writers, poets and film directors.

Founded in 1838 as a southern stronghold for the Russian Empire on the Black Sea coast, Sochi only started to appear on the map of Russia in the last century when resort life in the city started to blossom. Since the 20th century the city has been an inviting site for writers, poets and film directors.

Soviet writers vacationed in Sochi, enjoying the beautiful nature and mild climate, (for example, Isaac Babel was here with his future wife Antonina Pirozhkova at the very beginning of their romance in 1933), and, of course, gave the city and its environs episodic roles in their literary works.

The beauty of Caucasus was admired by Pushkin and Tolstoy. Source: Lori Images

It is thus, in its essential nature as a resort, that the city is mentioned in the poetry of Boris Pasternak, who visited the Caucasus with his family in 1928, and the prose of another Nobel laureate, Ivan Bunin. The hero of Bunin’s story Kavkaz lived “in the mountain jungles near the tropical sea.” It was to this very place that the hero brought his married friend for the purpose of enjoying stolen happiness. He had sought out a “primitive location, overgrown with plane forests, blooming shrubs, magnolias, and mahogany and pomegranate trees in the midst of which fan palms rose and cypresses loomed…”

Another winner of the Nobel prize for literature, Joseph Brodsky, mentions Sochi in his poem, Albert Frolov: “January the second, in the desolate darkness my steamer left the quay for Sochi. I wanted to drink. I meandered down alleys, moving from port to center, and in the midst of the night stumbled into the service of the restaurant “Cascade.”

It is not surprising that the restaurant “Cascade,” actually the “Cascade-Prestige,” which is located in the center of Sochi, became a pilgrimage destination for admirers of Brodsky.

The name of the city is also found in Mikhail Zoshchenko’s interesting autobiographical piece, Before Sunrise. The writer himself considered it his most important work, but in the USSR its publication was suspended and it was not published in its entirety until 1968 in the USA. In it, Zoshchenko, who was famous throughout the entire Soviet Union for his humorous and ironic satire, analyzes the dark melancholy surrounding him. He searches for the reasons for his illness, recalling various episodes of this life and methods of conquering it. Sochi becomes one of the resorts that the writer visits in order to overcome his anguish with the help of medicine.

Founded as a fortress Sochi is a resort place today. Source: Lori Images

If we speak of works created in Sochi, perhaps the most famous of them was the heroic novel, How the Steel Was Tempered, by Nikolai Ostrovsky. The writer suffered from a severe form of arthritis and went to Sochi. After treatment, he was imbued with the “extraordinary beauty” of the area. It was in Sochi that he, bedridden and rapidly losing his sight due to an injury he had received to the head while he was serving in the Red army, started to work on the autobiographical novel that became a cult classic in the Soviet Union. His characters and images – the quintessence of revolutionary and socialist ideas - and the name of its main hero, Pavel Korchagin immediately lent their names to streets in several Russian cities, including Sochi. The novel was made into a film more than once in the USSR, and in 2000 a series was aired in China about it that had been shot by Chinese cinematographers.

It was in Sochi that the dramatist and storyteller Evgeni Schwartz wrote his most famous piece, An Ordinary Miracle. It was made into film twice in the USSR, in 1964 and 1978. Its a beautiful and touching parable about the power of love being capable of any miracle. In this story, a wizard transformed a bear into a youth and told him that he could not turn back into a bear unless a wonderful princess fell in love with him. However, upon meeting the beautiful princess, the bear understood that he wanted to remain a man more than anything else in the world. The second adaptation, shot by director Mark Zakharov, was a major hit and became widely quoted.

The city itself and it’s surroundings may be seen in the very popular soviet comedies of Leonid Gayday, The Diamond Arm and Prisoner of the Caucasus.

Shot in 1968, The Diamond Arm is the charming story of unlucky adventurer-contraband runners whose paths are crossed by a simpleton, “a humble soviet servant and exemplary family man,” who had been awarded a cruise trip for his excellent work and accidentally got a cast on his arm. In it was a collection of valuable jewels destined for illegal importation into the USSR. According to data from the website Kinopoisk.ru, this tale is the third most popular among all domestic films in the history of soviet movie distribution.

The most exhilarating footage of "Prisoner of the Caucasus" were shot in the vicinity of Sochi. Source: Lori Images

Filmed in 1966, the Prisoner of the Caucasus rates only slightly lower in terms of popular love, occupying fourth place in the aforementioned ranking system. Its fate, however, turned out to be more dramatic. The story about the kidnapping of a bride, the komsomolets, sportswoman, and beautiful Nina. It seemed too fantastic and later frivolous to many at first, so it was banned. It is believed that Leonid Brezhniv, who really enjoyed Prisoner of the Caucasus, personally authorized its showing. The most exhilarating footage and views were shot in the vicinity of Sochi – the precipice opening beneath the window of the charming captive and the scene where the main hero saving the brave girl plunged into the mountain river.

Sochi appeared in other soviet film classics, for example, in the children’s stories, Old Hottabych (1956) and Attention, Turtle! (1969), when the popularity of the resort had already been unusually high. In the post-perestroika period of the 1990’s, the name of the city showed up in the title of a film – another adventure comedy, Dark Nights in the City of Sochi.

IN PICTURES: The city of Sochi, where the summer comes across the winter

Interestingly, the Caucasus itself has proven to be a highly productive place for Russian writers. One fact would suffice for it to earn its place in the history of Russian literature: Leo Tolstoy authored his first works while serving in the military in the Caucasus. He was in the Caucasus for two years (1854-1853) and after that returned to it in his books on more than one occasion. Moreover, even after his spiritual crisis, when he renounced his creative productions, Tolstoy continued to value his story,Caucasian Prisoner. (This has already been made into film twice in our time).

The poet Alexander Pushkin, who admired the beauty of the Caucasus 30 years before Tolstoy, also has his own Caucasian Prisoner. In his interpretation, this poem is about the love of a young Cherkess woman for her Russian captor.

Yet another lyricist of the Caucasus is the poet Mikhail Lermontov, who also spent time in military service here and was ultimately killed in a duel in Pyatigorsk. The Caucasus theme courses through many of his works, the novel A Hero of Our Time, the poem Khadji Abrek, Mtsiri, Ismail-Bey, and others.