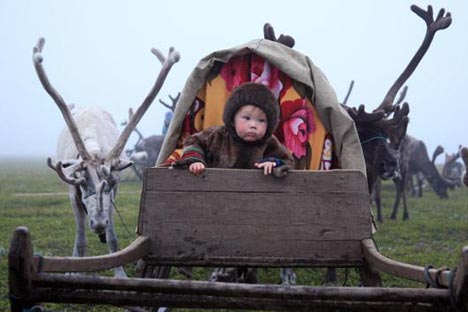 Ethnic tourism is becoming increasingly popular in Russia and more tourists are visiting the settlements of indigenous peoples in Yakutia, Altai and Tyva, Chukotka, the Caucasus, and the Komi Republic.

The Yamalo-Nenetsky Autonomous District is one of Russia’s biggest ethnic tourism destinations. In that sense it is rivalled only by the Khanty-Mansi District (also known as Yugra), which lies to the south. The local Torum Maa ethnic reserve was one of the first to be created in Russia back in the mid-1980s.

There are 41,000 indigenous people living in Yamal, including 15,000 nomads. These people essentially spend their whole lives following their reindeer herds from one pasture to another, bringing their tents and possessions with them on sleighs. Wherever reindeer go, the herders follow - and the reindeer go where there is plenty of reindeer lichen, their main source of nutrition.

There are 41,000 indigenous people living in Yamal / Lori, Legion Media

According to the Russian statistics agency, there are 48 indigenous tribes living in Russia, mostly in the Far North, Siberia, the Far East, and the Caucasus. The country's indigenous population is less than 500,000, or 0.3 per cent of the total.

According to the government officials behind the Yamalo-Nenetsky Autonomous District development strategy, ethnic tourism can spur the local economy and create jobs. It can also help to preserve the traditional culture of the indigenous peoples of the North, i.e. people such as Papako and other reindeer herders.

Oymyakon, the coldest place on Earth, is one of the most popular ethnic tourism destinations in Russia. The lowest temperature ever recorded here is – 77.8 C, even though in summer it can be as hot as +30 C. Tourist attractions include Lake Labynkyr, which offers great fishing, and is also home to a huge pre-historic creature, if some reports are to be believed. Tourist parties also go hunting for mammoth bones, and can spend a day or two living with the locals in their traditional tents. The people who live here mostly make their living by hunting; tourists are welcome to join the hunts.

Altai is sometimes called the Russian Shambhala. The itinerary of every ethnic tour of this mountainous region always includes a visit to the local shamans and a crash course in the traditional local throat singing. Tourists can spend a whole week travelling with the nomadic Telengite people. The Telengites are one of the smallest indigenous peoples in Russia; there are only 2,400 of them left. Other attractions include settlements of the Old Believers near the Multinsky lakes.

Ethnic tours of Chukotka are not cheap; nevertheless, the experiences such tours offer is truly unique. Most of these tours combine elements of ethnic and eco-tourism. Professional guides take their charges 600 km (365 miles) deep into Chukotka, crossing high mountain passes, fishing, exploring the Arctic coast on quad bikes and snowmobiles, boating, visiting whale hunting grounds in the company of indigenous hunters, and riding reindeer.

Ethnic tours of Chukotka are not cheap / Geo Photo

Tour prices start from 70,000 roubles, or 2,000 dollars (not including airfare). For more details, see Visit Chukotka

Two republics in the Caucasus, Adygeya and Kabardino-Balkaria, are famous for their rural tourism attractions. Tourists are invited to spend a few days in an ancient Balkarian village high in the mountains, 2,000 meters (6,600 feet) above sea level, lodge for a night in a herder’s cabin, or rent a saklya, a traditional home built in the 15th century. They are also welcome to take part in hay harvesting. In Adygeya the locals will teach you to make their famous cheese, and you’ll be living in a real Aul mountain village.