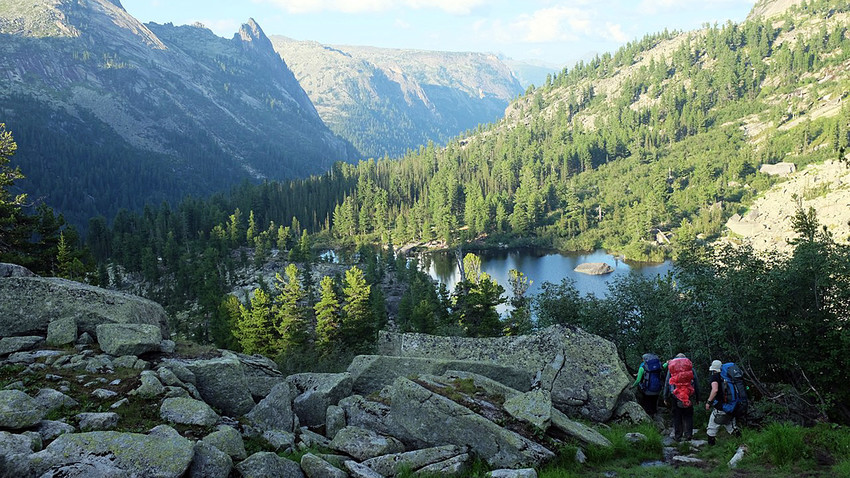 The "Nature trail” wooden pointer, located near the M-54 federal highway, promises an easy way and a relaxed walk to our first stop – Svetloye Lake: there is an orderly road ahead, laid with logs and sawdust left over from construction works. Within a hundred metres, the trail gives way to the taiga “mud-locked roads”: soil, washed out by the rain, puddles, fallen trees and stone boulders. The nature trails, cozy wooden houses and cafes close to the highway are for lovers of a "weekend hike."

The closest towns to the Ergaki Mountains are Kyzyl, Abakan, Minusinsk and Krasnoyarsk, but it's best to get there from Abakan. It is a 2-2.5 hour car ride from the capital of Khakassia along the Abakan – Kyzyl highway (M54, also known as Usinsky tract). You can park in the car park for a fee. You can catch the Abakan – Kyzyl bus along the same road, the drop-off spot is the Tormozakovsky bridge, Tushkanchik river or Pod’emniy stream, depending on your route.

Peter Jackson could easily shoot "The Hobbit." here. But the Ergaki Mountains are valuable and unique not only for their astounding views, but also for their compactness (you can see half of the mountain sights in a week), and by the variety of the reliefs and landscapes that surprise even experienced travellers.

The recreation and tourist area of the park spreads over 160,000 hectares, more than sixty peaks, mountain ridges and passes are stretched out here. There are many waterfalls making noise here and some of their cascades rush down from a height of 200 meters.

The views of the cliffs cutting through the clouds give way to cedar forests and alpine meadows and marshes, white glaciers coexist with fiery Siberian globeflowers, and the turquoise lakes with clear streams. The water in the Ergaki Mountains is icy, pure and has a sweetish taste; you can’t buy water like this anywhere in the world. 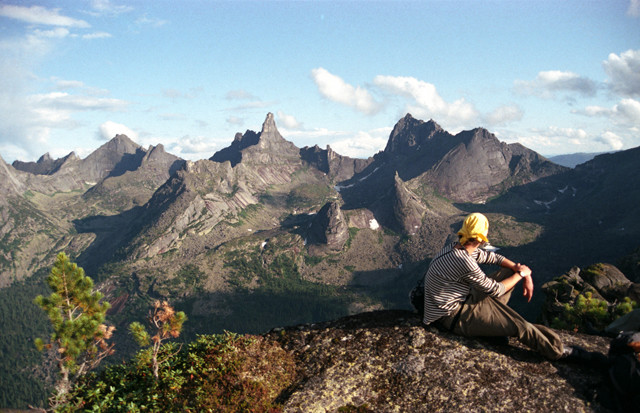 The variety and quality of the Ergaki Mountains also gave rise to climbing and mountaineering here, as well as environmental, sport, equestrian tourism and rafting. In 2005, the ever-growing human pressure laid on the mountain territory became the cause of the creation of a special protected Ergaki mountains zone – a natural park.

Sleepless in the den

In summer, most of the travelers go to the mountains immediately upon their arrival and live accordingly, in tents and in the wild. However, the Ergaki Mountains have six recreation centers that offer horseback riding tours and hiking in the summer, and in winter travelers are accommodated in cozy houses with cafes and saunas. Fans of downhill and cross-country skiing, snowboarding, snowmobiling often come to the Ergaki Mountains in winter or just for active winter holidays. This is a lovely place to stay for New Year's holiday.

From a neighbouring red tent situated just a hundred metres away from our camp, there was a sharp clang of metal utensils and a lingering human cry. Your body paralyzed with fear leaves no doubt: a bear has come. Describing this fear, unfamiliar to city dwellers and those who have never been scared, those who have only seen a bear in the zoo, is like telling a blind man about a rainbow: he wouldn’t find any true epithet. While shivering form something other than the cold, you unwittingly come to the conclusion that the brown bear is not a Siberian myth, not a hackneyed stereotype or a harmless symbol in the logo, but a real beast making soft steps, breathing heavily and noisily. You must take care to not bump into one.

The "bear” problem in the Ergaki mountains is not far-fetched, but quite an acute one.

Here, the wild beast has been fed by careless tourists for a long time: he has cleverly learned to pierce a can of condensed milk with his claw, has tasted the stew, and has grown to love factory-made sweets . But most importantly, he is no longer afraid of people, which gives more work to the natural park’s rescuers every year. 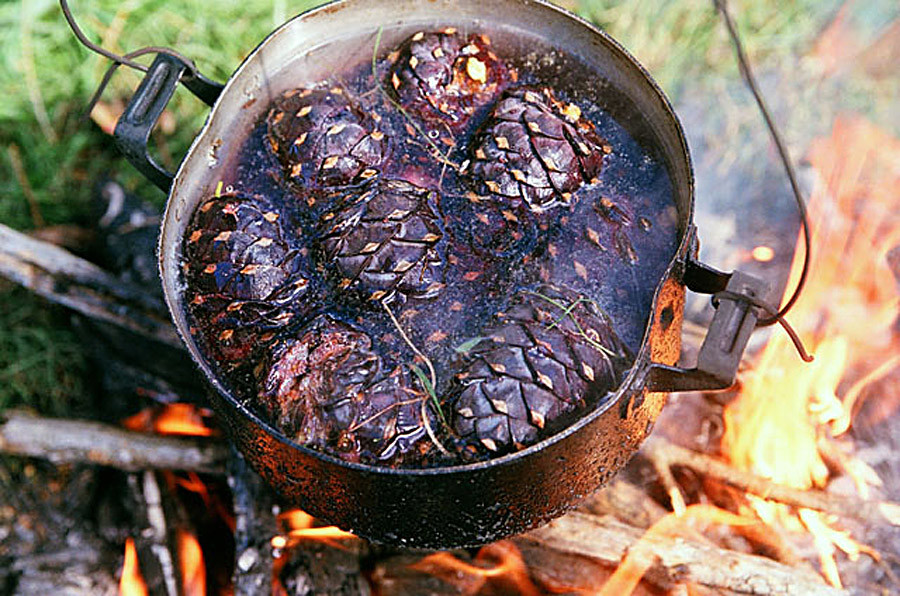 Thus, (as it was revealed by the footprints) the bear came to visit our neighbours in the camp because the tourists, who only reached the Svetloye lake when it got dark, did not have time (or were just lazy?) to hang a backpack with food to the cedar tree. The bear tore up the backpack lying around, sucked the vegetable oil out of the bottle, and the next night he was sniffing in our stations’ direction. However, a large dog, which appeared on the shore along with new campers, in the evening, drove the bear away to the coniferous forest with its barking .However, as it got dark, there was little reassurance – wherever there is a baby bear, there is a mother bear .

The popularity of the Ergaki Mountains is growing. As the Natural Park’s employees point out, the annual influx of tourists has increased by 10-15 percent, meaning that the percentage of random and inexperienced travellers is increasing, and the problem with bears remains... on the tourists’ conscience. 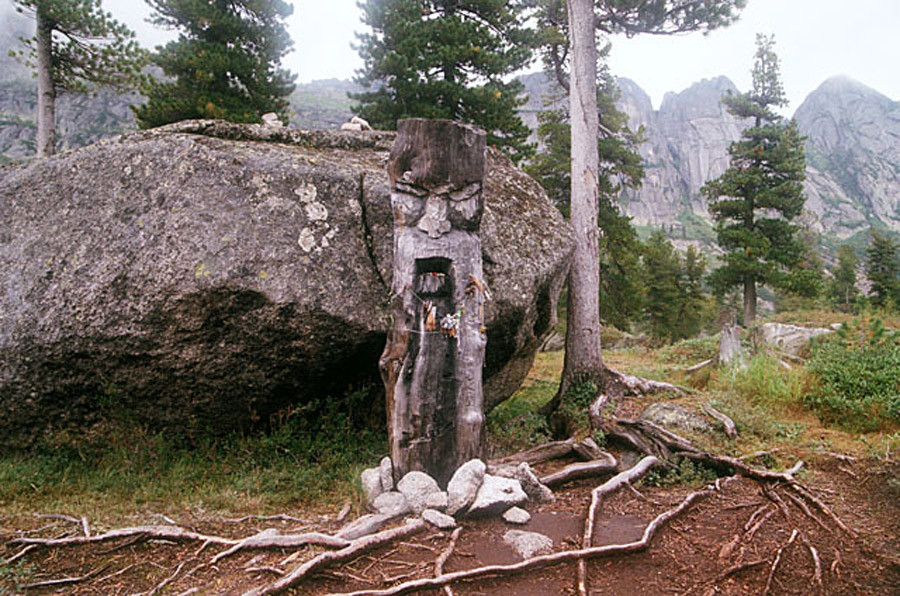 The Ergaki Mountains are also a space of myth, stories of the deaf taiga, extending from peak to peak, from one path to another. Ethnographer Mongouch Kenin-Lopsan, Tuvan shamanism researcher, notes that the Ergaki Sayan Ridge has long been a sacred territory for the Tuvan people, where the initiations of shamans were conducted. Today numerous yoga tours offer their own options of "initiations" in these legendary mountains so sometimes one can observe group exercise routines or hear the singing of chants from the forest in the Ergaki Mountains.

Those tourists who are not engaged in spiritual practices in the Ergaki Mountains, but are just letting their souls relax, still continue to build, sharpen or cut around something that has a secret power for them, and tie colourful ribbons in trees and bushes. At the "Arrow" station (the confluence of the Taygishonok and Left Taygish rivers) we were met by a peculiar mountain idol for tourists – an old tree stub with a formidable chiselled face and a big hole for the mouth. 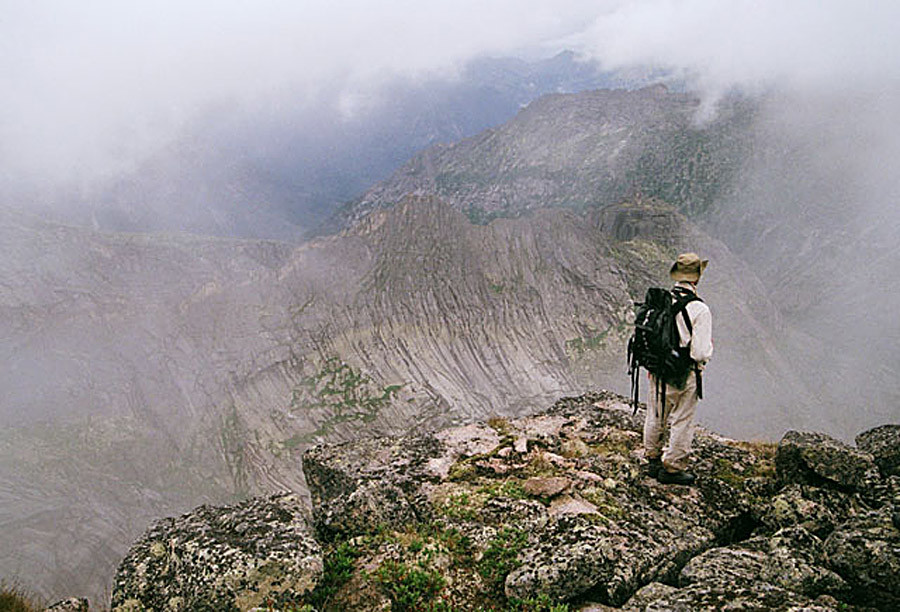 At night, the wooden statue looks like the tent city’s reliable guardian with a small piece of burning coal in this hole. However, in reality its protective magic does not work: at the station, there are bits of bear droppings here and there.

No wonder that for us, natives of a boring urban environment, the majestic mountains and quiet forests become an alternative to the monastery, the best escape from civilization, and the just tasted Siberian exotics. 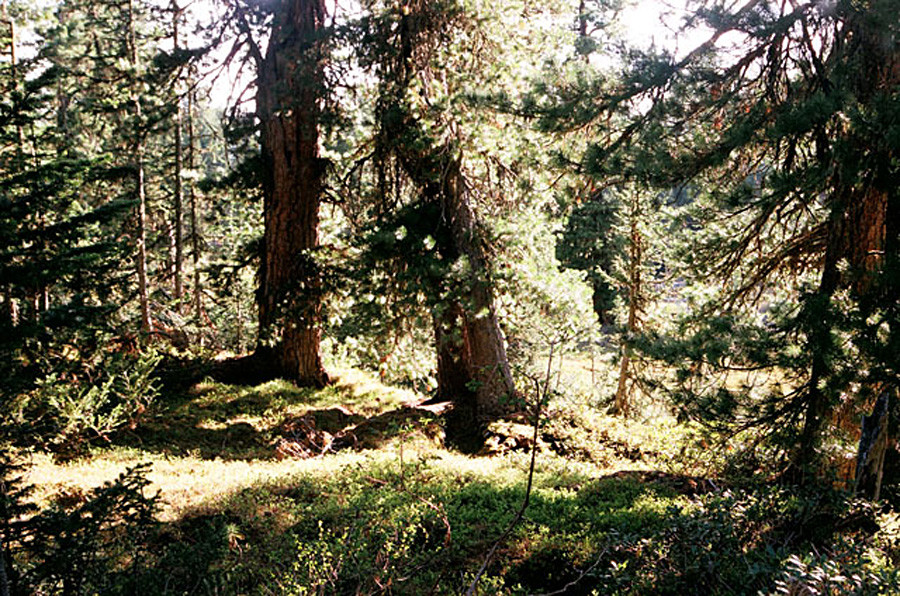 In the Ergaki Mountains you can’t resist:

- Indulging in bilberries, blueberries, and honeysuckle in July and August

- Swimming in a mountain lake

There are numerous cafes in the park, near the highway and the recreation centres. However, in the summer, food in the taiga is up to the tourists. You must know and understand: in the park, cutting trees to make fire is not permitted, tourists should prepare their food on gas stoves.

Mountain hikes should be led by an experienced guide who knows the Natural Park routes and their features and attractions, as well as all the "pitfalls" of the Ergaki mountains, including the rather rainy summer weather (for example, during our hike, it was raining for seven out of the fourteen days). In the Ergaki Mountains, one must follow the rules, which can be found on the official website in the ‘Eco-tourism’ section.