A window into the wild tundra 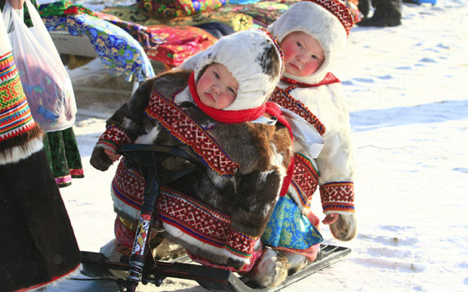 One can live with reindeer herders in a camp of native peoples of the north. Source: Andrey Raskin

Yamalkan is the only tourist base located in the Arctic Circle and offers a chance to dip into the world of the wild tundra for a few days in a completely safe fashion.

The unpredictable nature of the permafrost and a legacy of the Ice Age, cannot be seen from the window of a tour bus or from a viewing platform at the end of a pedestrian tourist route. They do not enter the tundra. Nenets, Khanty, and Mansi – the indigenous peoples of Yamal – have been conquering the tundra on reindeer sleds for centuries. These days, however, those wishing to experience life “like the locals” are increasing in number. They want, for example, to catch a driver reindeer with a lariat (lasso analog), harness it into the sleigh, drive a herd to a new pasture, set up a chum and spend the night in it, catch a seven pound fish, scare up some rabbits, and gather cranberries, cloudberries, and black rowan, or chant an ancient spell to the beat of a shaman’s drum.

Most importantly, one may return to his guesthouse from the chum at any time. Source: Andrey Raskin

One can live with reindeer herders in a camp of native peoples of the north, diving deeply into their customs and culture for a period of several days to one month through the Yamalkan tourist centre. An important compliment to this and any other program offered by Yamalkan has to do with the safety of participants. And, most importantly, one may return to his comfortable guesthouse from the chum or tent camp at any time.

For many fans of active and extreme holidays, reindeer sleds are not the fastest means of getting around. Thus, the creators of Yamalkan have provided a complete park of the most diverse types of transportation geared for getting around off road: snowmobiles, snow bikes, snow and swamp-going vehicles, four wheelers, jeeps, jet skis, and boats.

In the wild tundra, there is no time for long slumbers. Extremists thirsting for speed can try a safari and zip around off road as fast as possible. Various programs include routes ranging from 62 to 124 miles long. Participants take them in several stages. Any route may be adjusted according to participants’ wishes.

The indigenous peoples of Yamal have been riding reindeer sleds for centuries. Source: Andrey Raskin

Among all the centre’s offerings, there is also a trip to Yamal’s most important historical places. This would certainly include visiting all of the attractions of Salekhard from the Cossack “Obdorsk jail,” the first stone structures, the ethnographic museum, and the Nenets market to the memorable places of the famous 501 building. Yamalkan has created 12 different tours in total. The cost of the tours varies depending on the number of participants and ranges from 200-570 dollars.

In the wild tundra, there is no time for long slumbers. Source: Andrey Raskin

Yamalkan operates year round. However, the most impressive time to visit the centre is in the spring, when the traditional “Day of the Reindeer Herder” is held in Salekhard. As part of the program, people throw tynzyans onto khory (reindeer skin lariats onto driving poles), leap across narty (sledges), compete at stick-pulling, and race on reindeer sledges; the only northern international snowmobile marathon in Russia bringing together riders from all over the world is also held.

In spring, the traditional “Day of the Reindeer Herder” is held in Salekhard. Source: Andrey Raskin

Each of the three tourist bases has a restaurant where one may try dishes traditional to Yamal made from the rare fish swimming in the Ob and its tributaries: arctic cisco, muksun whitefish, and broad whitefish. However, you will find the muksun ukho and reindeer filet on par with the stroganina (sliced frozen fish); traditional Russian pancakes, borscht, and beef medallions are also served. An average lunch will cost $40.