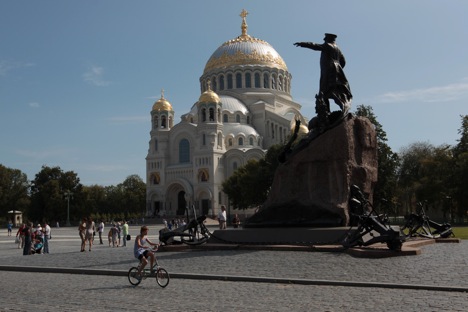 The “city of farewells” has its fair share of mysteries and legends, making it ideal for a day-trip from the northern capital.

Kronstadt can be reached by car or shuttle bus from St. Petersburg (No. 405 goes from the Chernaya Reka (Black River) subway station). From the south, there is a route through the city of Lomonosov to the island of Kotlin, which takes you through the newly built tunnel under the Gulf of Finland. If you are thinking of conquering the city from the north, then you can go through Lisy Nose (Fox’s Nose) or Sestroretsk. The route runs along both sides of the dam and is part of the St. Petersburg Ring Road. It is most convenient to book a tour, especially if it goes by boat around the forts. Buses and travel agencies and offices are located at Gostiny Dvor metro station.

Closed to public access until 1996, among the residents of St. Petersburg, Kronstadt gained a reputation for having a rebellious undercurrent – a place where people lived by their own rules and would not tolerate outside visitors. They say that they ruled with their own law and order, sailors wore bell-bottoms wider than permitted, and in Soviet times, when the store shelves were empty and there were long lines for delicacies, one could always find caviar and sausage in Kronstadt. To get to Kotlin Island, where the city was built, was truly difficult. Kronstadt was considered a separate country, surrounded by checkpoints with heightened passport control and vigilant on-duty gunners. One could only visit the city with a guided tour at the invitation of a resident of Kronstadt; and there were never any complaints from mainlanders.

Kronstadt was closed on the inside as well. For example, Fort Ino was used as a testing ground for high security. According to the stories of old-timers who served this underground structure complex, experiments were conducted to identify the effects of hard radiation on animals. The testing ground was later liquidated, but even so, access to the fort has remained closed for many years. The city keeps a lot of military secrets. As a Baltic Fleet base and one that closes off sea approaches with a complex system of canals and forts, Kronstadt developed a new type of weapon by raising a new generation of sailors.

Since its inception in 1704, Kronstadt has been a military town. Peter I chose the island to build the Kronstadt fortress for defending approaches from the sea to St. Petersburg. Later Kronstadt was surrounded by forts, which no single enemy could penetrate.

Fort Constantine Hotel is situated directly on the grounds of the fort.

Military engineers were imported to the island of Kotlin for the development of the city, often against their will. Someone even tried to escape from despair, but these attempts were doomed to failure: the only access to Kronstadt at that time was via water. During World War II, the city defended Leningrad from the Nazi air attack.

Only since 1984 has Kotlin Island become linked to the mainland by roads on the north side, running along the seawall. To reach Kronstadt via the dam, you will see a fascinating spectacle: on both sides of the water there are high concrete barriers built to defend the city from Mother Nature during her violent periods. But at times they cannot cope with the rebel sea, and the waves gush across the highway. In such bad weather, the road across the causeway to the island is closed. In 2011, a 2 kilometre tunnel was constructed, passing under the Gulf of Finland.

Discovery of the Antarctic

In 1771, the city opened its first Sea Cadet Corps. The school became a landmark not only for Kronstadt, but also for the whole country, as Ivan Krusenstern and Yuri Lisianski embarked on the first Russian worldwide expedition in 1803. In 1819 Kronstadt sent Thaddeus Bellingshausen and Mikhail Lazarev on an expedition in search of a southern continent. This led to the discovery of Antarctica.

The First Icebreaker and the Rescue of Europe

While discovering new continents abroad, scientific work was in full swing on the island. The metal-ship tug named “Pilot”, constructed on Kronstadt, would become the world's first icebreaker. It shuttled between the island and the city of Lomonosov (at the time, known as Oranienbaum). Based on a similar design, the “Britneva” icebreaker saved Europe during the cold winter of 1870-1871, when the Elbe had frozen and navigation to Hamburg was stalled. After the two icebreakers’ design was perfected, they were deployed once again. U.S. and northern European countries based their own icebreakers on the Soviet model.

Kronstadt is home to many firsts. For example, in 1804 the city conducted anti-ship missile tests; and mine warfare was conducted for the first time in its waters. In 1882, the world's first diving school was founded. In addition, maintaining Kronstadt’s reputation as a city of scientific discoveries, in 1895, Alexander Popov, a professor in the mine-officer class, invented the world's first radio capable of transmitting radio signals at a distance of 40 meters, which ensured communication with ships released into the sea.

One of the most important achievements was the creation by Kronstadt scientists of a vaccine against the plague. The first plague laboratory was established at Fort Emperor Alexander I. At that time, only Paris and Bombay had such centers. Thanks to the work of these scientists thousands of lives have been saved, and they managed to extinguish the outbreak of the plague and stop the cholera epidemic in 1908 in St. Petersburg. But they were unable to save many of those who developed the disease.

The research was conducted on horses. Their blood altered the plague virus, giving salvation from disease. The fort contained a steam heater, an elevator for lifting the horses, and an incinerator to dispose of the infected animals. Cut off from the mainland, the artificial islands’ only link with the outside world was a small steamboat, which received the unequivocal title “Microbe”.

The forts of Kronstadt

Each Kronstadt fort requires its own separate story. By the beginning of the 20th century, there were a total of twenty-one forts on Kronstadt.

If Fort Alexander is too difficult to reach by water, then go instead to Grand Duke Constantine, where you won’t have to swim. It is Kronstadt’s most visited tourist destination and is growing rapidly. Now, there is a yacht club and a cultural centre that houses powder magazines, batteries, and a barracks at the fort. From atop the fort, one can enjoy a beautiful view of the bay, including the mysterious Fort Chumnoy and Fort Pavel I, as well as the main attraction of Kronstadt, the Naval Cathedral, which is also visible in the distance. Throughout the history of the fort, the Constantine testing site tested only the newest types of artillery.

Fort Emperor Paul I, still called “Risbank” for the special wooden fortifications on which it was built, was once the largest and most impressive. Later, like many others, it was used for the storage of naval mines and torpedoes.

Many legends were born at Fort Ino, whose very name means “bad place”. It was built to protect the entrance to the Gulf of Finland. Its bottom and sides are covered with a thick layer of concrete, which protected the fort from enemy shelling, howitzers, and other projectiles. A huge underground city functioned beneath the fort, with a barracks, railway, and electric lift. According to one legend, during the spring of 1918, a train arrived here with thousands of boxes filled with gold bullion, diamonds and jewels to transfer to the Bolsheviks from Germany. In return, Russia had to withdraw from the First World War. But the deal failed, and the fort was blown up by Soviet soldiers, with the gold left lying under the rubble and a 3-meter-thick layer of concrete. Later, indoor testing was held there to determine the effects of a particularly dangerous radiation. Nowadays, the dosimeter does not register any radiation hazard in that area. The underground galleries of the fort can be reached today with the proper equipment – the concrete city is still preserved below.

The Naval Cathedral of St. Nicholas stands in the centre of Yakorny (Anchor) Square – Kronstadt’s answer to the Hagia Sophia Cathedral in Istanbul. It is sublime: 71 metres in height, and the cross on the dome served as a beacon to mariners, as it could be seen at a distance of 30 miles. Every sailor had to give a quarter of their salary for its construction. It’s huge, round windows resemble portholes, the floor was laid with stone taken straight from the sea, and its dome painted like the sky.

In Kronstadt, in 1777, a tide-gauge service was created to define sea level fluctuations. Zero on the Kronstadt tide-gauge is the benchmark for measuring the depths and heights, as well as for the orbits of spacecrafts in the former Soviet Union. It is from this tide gauge attached to the buttress of Siny (Blue) Bridge, where depths and heights throughout Russia are measured.

The city has many parks. Most of them exist thanks to Bellingshausen, who personally planted the trees and ordered the best seedlings from across the country. Interestingly, some of the streets in the center of Kronstadt have two names: a Soviet one, after the revolution, and their original.

Fairy Tale, 31 Lenin Avenue – a cozy restaurant with a wide selection of cuisine