Economic holidays on the Baltic coast 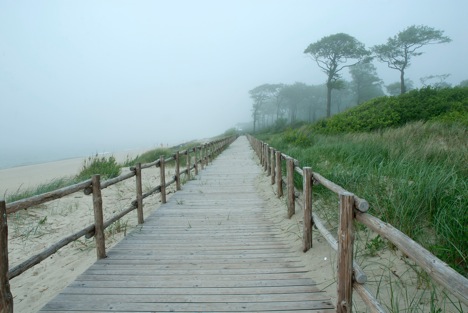 The Curonian Spit, in the Kaliningrad Region, is a good place to have a relaxed, peaceful and inexpensive beachside vacation.

The Curonian Spit is the most popular destination of the Kaliningrad region. The spit is a unique natural path of sand and trees surrounded by water on both sides: the cold Baltic Sea on the right and the warm shallow Curonian Lagoon to the left. The sixty-mile-long spit stretches from Zelenogradsk through the settlement of Rybachy and ends in the Lithuanian Klaipeda. The widest spot is 2.3 miles across and in some places it narrows down to 437 yards. One can run from one side to the other, cool off in the sea, and bask in the warm shallows of the Curonian Lagoon.

The spit became popular among painters, especially those who loved to work en plein air, starting in the 19th century. Creative bohemians from all over Europe flocked to the sand dunes for inspiration. Many of them stayed there permanently, buying shacks from fishermen and turning them into workshops or hotels. Many hotels decorate their interiors with the works of these same artists. 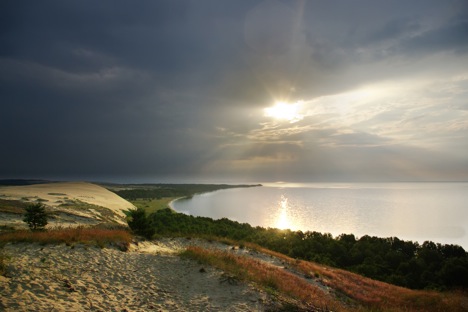 However, the landscape of the Curonian Spit is not always as tranquil as it appears. The famous sand dunes flanking the snowy white beaches have buried more than one village over the past few hundred years, due to a phenomenon called “wandering dunes” in which sand pours uncontrollably into the Curonian Lagoon and presents a great threat to the local inhabitants. The crumbling sand dunes are a result of large-scale deforestation, the sandy soil under a thin layer of turf, and the constant, extremely strong Baltic wind. But now pines and shrubs planted on the spit are holding the dunes back thanks to their long branchy roots. They serve as the only natural line of defense against “wandering dunes.” The flowing dunes are also halted by fascines, low wicker fences that are planted with grass and shrubs that have strong root systems. The famous “avant-dune,” a sand mountain that protects the spit from the Baltic wind, was also built with fascines.

There are many attractions on the Spit, from museums to mystical places that scientists cannot fully give logical explanations for – like the “dancing” or “drunk” forest, for example. This is a small segment where trees do not grow straight but puzzlingly writhe and dance, forming figures over time filled in by imagination. According to legend, there is a tree ring in the forest that one may crawl through to make wishes come true, or to “charge up” on the incredible energy of the place. Scientists explain the “dancing forest” by pointing to the constant strong winds that the spit is exposed to. But it is not clear why the forest’s trees only twist in a few spots, not everywhere. An interesting ongoing experiment has been in place for the past few years: new, young trees have been planted near the “drunk” trees so that researchers can follow whether they will also end up “squirming,” and if so, at what stage of development. If the “dancing” does not happen, then maybe the legend about unearthly forces causing the trees to move will not seem quite so ludicrous to tourists. 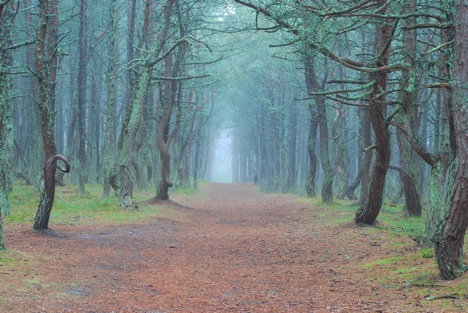 As protected territory, the spit is almost entirely covered in mountain pines, black alder, linden, and elm. There are also moose and deer, and wild pigs make occasional appearances. These hairy pigs are not afraid of automobiles, and drivers often get annoyed when the pigs cross the road.

There are routes through the forest: the main one is built like a boardwalk. Leaving the trails is not recommended as the forest abounds in ticks (tourist paths are treated with a special tick-repellent solution).

The Curonian Spit is also called “Bird Bridge,” because the ancient migration routes of birds from the northern countries to the southern regions of Europe and further to Africa pass through here. Operating on the spit is one of the first ornithological stations in the world, which opened in 1901 and was named “Fringilla,” meaning finch – the most popular bird on the spit. Ten to 20 million birds fly to the spit twice a year. Thanks to the calm and abundant fish of the Curonian Lagoon, this is an ideal place for birds to stop and rest before their upcoming flight. During these stops, birds are carefully caught and tagged. Researchers will monitor the birds’ health and origin, as well as how often they fly to the spit and how many such flights they have already made. 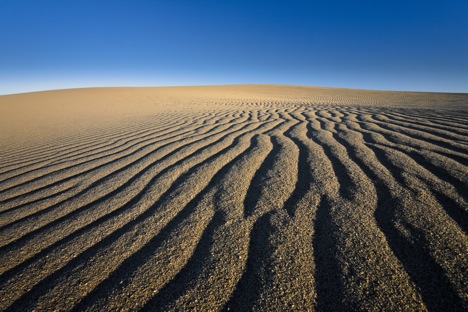 Near the ornithological station is the Curonian Spit Museum, which provides information about the site’s nature and history.

It is also worth visiting the wandering Efa Dune, also famous as the Nut Dune, the second highest in Europe. Since walking is prohibited on the dune, a path has been created especially for curious tourists. It is called “Efa Heights.” The pedestrian trail is about 1.86 miles long and crosses over the Nut Dune at its highest point – the heights of the Efa, which was named in honor of the famous forester. At the end of the trail a lovely view of all the dunes of the Curonian Lagoon is visible from a viewing platform. Here you can hear the sands moving.

Mueller Heights on Swamp Dune is also remarkable. From here one can see the Curonian Lagoon and the Baltic Sea at the same time.

One of the reservoirs on the Curonian Spit is Swan Lake, a wildfowl preserve. There are mute swans, Eurasian coots, grebes, herons, and mallards. The lake appeared relatively recently – it is separated from the sea by a thin strip of trees. 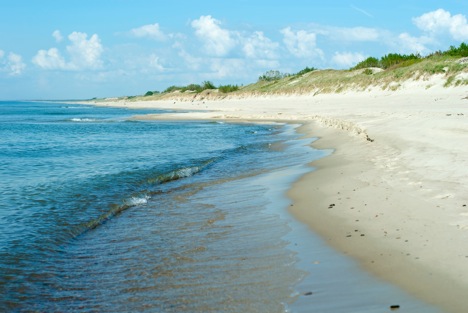 Gull Lake is the largest freshwater lake on the spit and is appealing to fishermen. There are a lot of carp here in particular.

There are also a few lighthouses on the spit that serve as guides for ships on the Baltic. Particularly notable is the 108-foot-tall Rybachy Lighthouse. It is located on the outskirts of the settlement of the same name, on top of the Black Dune. Other local lighthouses often faced trying fates: the first lighthouse on the spit was blown up by retreating German sappers, and the other had to be disassembled – its structure was compromised during a strong storm.

The names of the villages reflect the main occupation of their inhabitants: Lesnoy (forestry), Rybachy (fishermen), and Morskoe (marine). 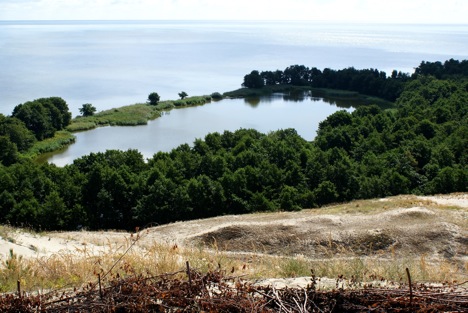 The entrance to the strip from the Russian side costs about nine dollars in a car, and there is only one road, which goes down the middle of the spit. One pleasure of traveling on the road is that it is solid and smooth; to the right and left there are woods through which flashes of dunes and water sometimes appear.

Swimming season opens in the second half of June and runs through the middle of August. The water in the lagoon is fresh and always warm. The sea does not heat up more than 68°F, so it is considered cleaner. There are no equipped beaches on the strip as it is a protected area. Access to the sea is not available everywhere. In some places the road is blocked by barriers and cars must park only in parking areas.