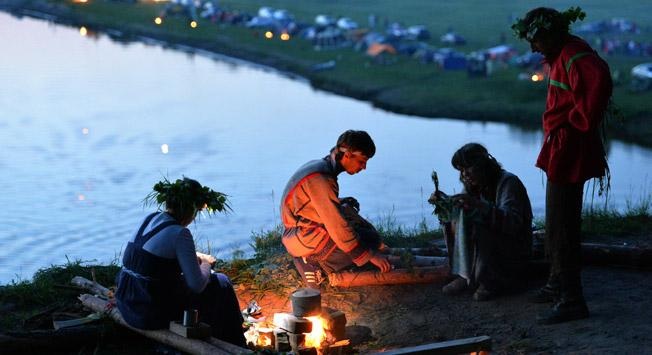 From a place believed to have once had an ancient Hanuman temple to a village lost in the world’s northernmost desert, RIR has made a list of unique villages that are off the beaten track.

“The Center of the Earth”

Residents believe that Okunevo is the center of the earth. It is believed that Okunevo was a typical Siberian village until the Indian guru Sri Babaji sent his pupil Rasma Rosita to find the “ancient temple of the god Hanuman” in Siberia. Rasma chose Omsk, because the name of the city, in her opinion, sounded like the Indian mantra “Om.” Over the course of her spiritual quest, Rasma found herself in Okunevo, where she spent several years and maintained a large following. Now in Okunevo five religions are represented (including Hare Krishnas, Old Believers and Gentiles), and believers work in creative workshops, organize festivals and celebrations in the summer, host pilgrims - followers of meditation from around the world. Okunevo also has its own “place of power,” such as the Haunted House, Witches’ Circle, Paradise Town, Shaitan lake, and many others. Since the existence of the Okunevo legend, visitors to the village have included Russian oligarch Roman Abramovich, Swiss multi-millionaire Freddy Bollag, a prince of Morocco and an Indian princess. It’s time to follow in their footsteps.

Not only are snow and permafrost visible in the Arctic Circle, but also the most northern desert in the world. On the Kola Peninsula at the mouth of the river Varzuga is Kuzomen, a village that is literally covered in sand. Masses of moving sand originated more than one hundred years ago on the coast of the White Sea, due to deforestation for saltworks and constant grazing. On a windy day, visibility rapidly deteriorates as sand, like snow, swirls along the streets, depending on the wind direction, laying to rest on gardens, wells, houses and courtyards. At the start of the 20th century, the port located just outside the village teemed with life: ships with salmon, salt and furs were unloaded and departed for Arkhangelsk, the Solovetsky Islands and St. Petersburg. Now there are forty houses in Kuzomen, a diesel generator that heats the entire village, an abandoned airport, a wharf and old crosses in the cemetery buried in sand.

Locals say, “Kuzomen’s sands are not released without anguish.” Despite the coldness of this far land and the extreme conditions of life, it’s definitely not beyond logic that you’d want to return here. Missing this spot when traveling to the Russian polar region is impossible.

In an old Russian village deep in the Komi Republic live descendants of the Novgorod Old Believers, who fled here in the 17th century from the church reforms of Patriarch Nikon. Seven thousand people live here. Village residents cherish their vintage sundresses, which they wear during their traditional holidays, “Gorki.” It is best to go to the most famous summer Gorki festivals in July. All the locals earnestly lead dances, sing old songs, organize nightly festivities in which you can participate. It is believed that Ust Tsilma preserved medieval Russian culture, language and folklore. Services are held in the Old Believer church. You can also visit the museum of northern European researchers and the handicraft center, as well as numerous rivers to raft and fish on the cleanest lakes.

The Pole of Cold

Oymyakon is the coldest settlement in the world. It is located in Yakutia (Siberia), on the left bank of the Indigirka River. Winter temperatures may fall as low as -70 degrees Celsius, and school is closed only at -50. In the summer you can observe the midnight sun and the area warms up to +12 degrees Celsius, but occasionally it can rise to +40. The shortest daylight lasts three hours. The village is inhabited by Even reindeer herders (500 people), who still live a traditional way of life. Each visitor can participate in their rituals, journey on a reindeer, and especially, horseback ride across the frosty tundra. Ice fishing occurs almost all year-round here. Record low temperatures generate an amazing phenomenon. For example -- Yakuts call it the “whispering stars” - during the deep cold people continuously hear the soft rustle of her instantaneously frozen breath. It’s not just breath - in Oymyakon, even vodka freezes.

The Kamchatka village Esso is located on the Kamchatka peninsula, in an ancient extinct volcanic caldera that preserves the warm micro-climate at the confluence of two rivers. Coniferous forests and highlands endow Esso’s air with healing properties. Numerous hot springs have transformed the outskirts of the village into a geothermal spa and also feed the pool open year-round in the main square. Among other things, the local thermal springs heat residents’ homes, and electricity is supplied to Esso through its own small hydroelectric power station on the River Bystraya. The Rotary Club, founded in 1900 as a division club in Anchorage, Alaska, is located on the top of the local library. The nature park Bystrinki, in whose territory the village is situated, is a grandiose natural complex among taiga forests, hot springs, and of course, indigenous representatives of the north -- the Evens.

The history of Belovodye, Shambala and the White Island in the north of the Sea of Milk -- in general, about blessed land lost in the east -- is so old that it once simply had to be true. According to the legend, Russian Old Believers found it in Altai. Multa lies just on its border and is the very edge of the population of the Altai world. Despite its modest size and remoteness, Multa is the center of the revival of ancient Slavic crafts. In the village, a population of seven hundred people is involved in stone carving, painting kitchen boards, weaving, and creating patterns from straw. Weaving occupies a special place: the entire production process is recreated from tradition, from sheep shearing, to wool dyeing with natural dyes, to working on horizontal looms, tablets or berdyshka.

The sacred lake and Katunsky nature reserve are both located in the vicinity of the village.

Thousands of kilometers to the sands of Central Asia in Transbaikal is a real desert with dunes boasting ridges of 20-25 meters in height, wind ripples in the sand, howling dunes and sandstorms. Here it is possible to see the remains of trees killed by the onset of the desert, and characteristic creeping grass clinging to the moving sand. In comparison to a full desert, Transbaikal lacks only camels and scorpions. The Chara Sands is a very small desert. Its area is only 5 x 10 km, and on all four sides the desert is surrounded by taiga wilderness, swamps and streams. This incredible coexistence of two theoretically incompatible types of landscapes is what makes the Chara sands and nearby Chara village a “miracle of nature.” The whole history of the village of Chara, founded in 1932, is associated with geological research in the Char valley territory, which is located to the north of Chita and is 690 km from the capital of Transbaikal.

The Kodar Mountain Range sharply changes elevation at the Chara valley, as if without foothills, like a 2-3 kilometers wall. Because of this, the Kodar mountains are sometimes called the “Transbaikal Himalayas.” Many thousands of years ago a few giant avalanches descended from the mountains and later formed the sea. Chara Sands is the bottom of a dried-up prehistoric sea.