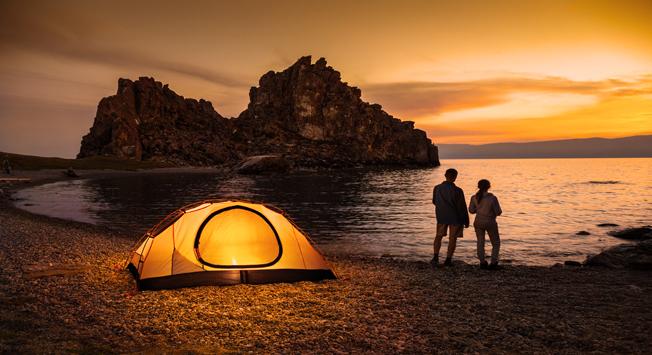 Couple stand at tent and Baikal lake shore and looking at the sunset. Source: Shutterstock / Legion-Media

Catch a sunset on the mystical shores near the Shaman Rock or the sandy remote beaches of Buryatia. Fall asleep under the golden sun pouring in through the window on the Trans-Baikal railway line.

This is the main tourist centre of Lake Baikal. It is usually the first settlement that travellers come to, thus there are many things to do. Rent bikes, horses or go rafting in the summer. During warm evenings take a mineral bath in Chivirkuy Bay and relax on pebble beaches and take in the setting sun. In the winter a steam-sauna is a must, where guests can heat up and then jump in the snow. It is also possible to rent a snowmobile, go skiing or try dog sledding and there are countless museums to visit, including the Limnological Museum of Baikal flora and fauna. 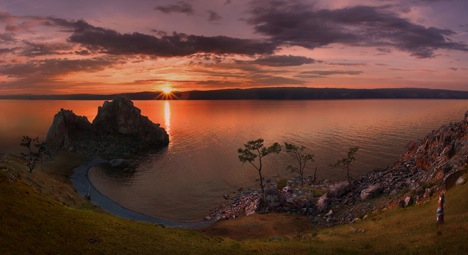 Watch the sunset here at the magnificent port of the Angara River or, for the adventurous, scale the two-kilometre trail up to Cherny cliff for immaculate views out over Lake Baikal from the observation platform.

The beautiful and sacred Shaman Rock is located north of Listvyanka on Olkhon Island. Legend has it that a furious Lake Baikal threw this rock at his daughter to prevent her from running off to her beloved Yenisei River. Criminals were brought here to test their fate against the cold nights brought on by the gods. If they survived they were granted mercy and set free. Shamans take oaths and pray at the 13 poles erected on top of the hill nearby, believing in its miraculous power. 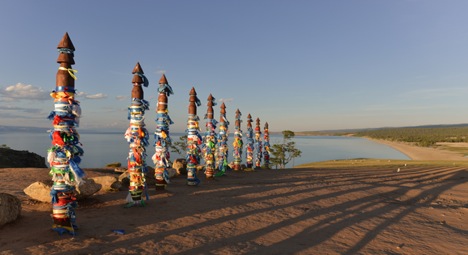 Olkhon Island is the third largest lake island in the world. Most local residents are native Buryats. Photographers will be impressed by the untouched natural wildlife and jaw-dropping landscapes. We recommend enjoying a day of bicycling and horse riding before climbing the hill at Shaman Rock to get drenched by the evening sunshine.

Continue north around to the eastern shores of Lake Baikal to the Svyatoi Nos (Holy Nose) Peninsula sheltering Chivirkuy Bay. 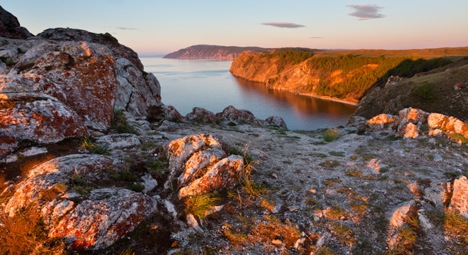 It is squeezed between the Svyatoi Nos Peninsula and the Barguzinsky Range. Shores of Chivirkuy Bay are covered by taiga and many of its small inner bays are sheltered from Baikal's winds. In the second half of the summer, these shallow bays are a perfect place for bathing in the clear waters. Birdwatchers will delight in the seven rocky islands that feature colonies of birds and mating places of the black grouse. Chivirkuy Bay is a sheltered place with open views of the expanse of Lake Baikal and offers calm and safe opportunities to wade in Baikal's magical waters. Top this off with a gorgeous evening sunset; they say that the fading of the sun here can change your life.

Further south down the eastern shore visitors will find the sandy beaches and bays of Buryatia. We recommend visiting Gremyachinsk near the Buryatian capital city of Ulan-Ude. 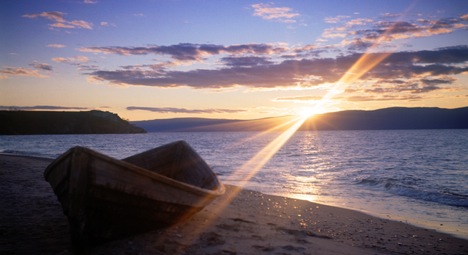 It is possible to get here by public bus, but if the opportunity presents itself rent an SUV, scale the dirt track for three hours and follow a time-honoured tradition by tossing a coin out the window at the turn for good luck and enjoy the path's turbulence all the way to Gremyachinsk. Here visitors will find a calm and peaceful place with cows, pigs, horses and goats grazing freely near the beach. Here the shores are on the sunset side of the lake, which can make for unforgettable evenings. In the winter, walk out on the frozen water and view the sunset from 100 meters off the shore. Or turn around and go inland to the tropical lake just outside the village for 20 degree waters and solitude.

The Trans-Baikal railway, which begins at Slyudyanka at the southern tip of the lake, was one of the original sections of the famous Trans-Siberian railway. Later on a duplicate of this section was built, allowing the Trans-Baikal to stand separately as its own line. Its unique construction and route along the shore make an excellent excursion through tunnels and over bridges at the lake’s edge. 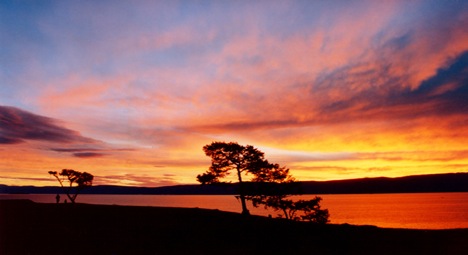 Many trains depart daily. Some travellers take the railway the entire distance from Slyudyanka to Listvyanka, enjoying the views from the window and the opportunities to relax and meet other travellers. Others travel small distances and take advantage of the outdoor activities along the way such as camping and trekking. Watch the sunset out of the cabin window rolling along Lake Baikal or from a tent at its shores.

Lake Baikal is so large that it has often been mistaken for a sea. Some days it is calm while on others it roars like an ocean. The local culture is as deep and rich as the lake itself. Catch a sunset on the mystical shores near the Shaman Rock or the sandy remote beaches of Buryatia. Fall asleep under the golden sun pouring in through the window on the Trans-Baikal line. If you are looking for a special romantic experience unlike anything else, consider Lake Baikal. It is much easier to get to than most people think and it is one of our most popular recommendations.

The writer is COO at Travel All Russia - a destination management company organizing some of the best tours to Russia for travelers from all over the world.