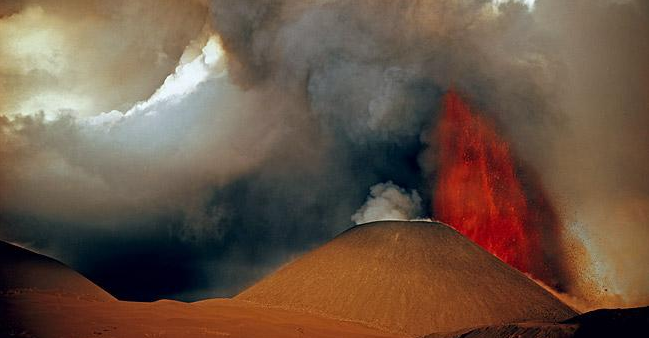 Arriving in the Kamchatka peninsula in the Russian Far East, one is struck by the close resemblance to Scandinavia. Spartan houses with the ocean as a backdrop, natural hot springs and geysers, long winters with volcanic ash-smeared snow and tall birch trees swaying against the strong northern winds make it a whole new experience.

The stone birch trees that loom over the landscape of Kamchatka are the only trees that cannot be broken by even the strongest of northern winds which sweep across the peninsula. It almost appears as though Kamchatka has more in common with Iceland than most of the Russian Far East. This most remote and among the least accessible of Russia’s regions manages to attract tens of thousands of tourists annually, despite the high prices and difficult logistics. What attracts tourists to this remote corner?

Kamchatka is the Russian “bear state.” An estimated number of between 15,000 and 30,000 bears live on this remote peninsula, the highest concentration of bears not just in Russia, but in the entire world. The safest and most scenic place to observe Kamchatka’s bears is at Lake Kurile (200 kilometers from Petropavlovsk-Kamchatsky). As an example of just how densely populated and plentiful the bear population is here, photographer Sergey Gorshkov once shot 17 bears in a single panoramic frame. The lake is part of the Kronotsky Nature Reserve, where it is mandatory to travel escorted by armed rangers.

​See the 360° Aerial Panorama of Kamchatka bears at Lake Kurile by airpano.com

Volcanoes
The fact that the Koryaksky, Avachinsky and Kozelsky volcanoes, which in good weather conditions are visible from anywhere in Kamchatka’s capital, are talked about in friendly and familiar terms (like domashny , or 'domestic' volcano) by local residents can provoke some shock among travelers: two of these giants are in fact active and periodically they “sneeze” (at such moments the town residents feel some mild underground seismic shocks) or their summits slightly “smoke.” Living amidst volcanoes has made local residents not only used to such phenomena (many houses in Petropavlovsk-Kamchatsky are reinforced by special quake proof technology), but also particularly sensitive observers of even the smallest changes in the behavior of their menacing neighbors.

For the best views of Petropavlovsk-Kamchatsky’s volcanoes, go to Mishennaya hill, while the Petropavlovsk Hotel offers some rooms with good views (prices start from 5,000 rubles, about $100). The only way to reach the other volcanoes in Kamchatka, including the caldera of the Uzon Volcano, Geyser Valley and Death Valley, is to take a helicopter from Yelizovo Airport, located on the outskirts of Petropavlovsk-Kamchatsky. Kamchatka’s 300 volcanoes are included as an entry on UNESCO’s World Heritage List. 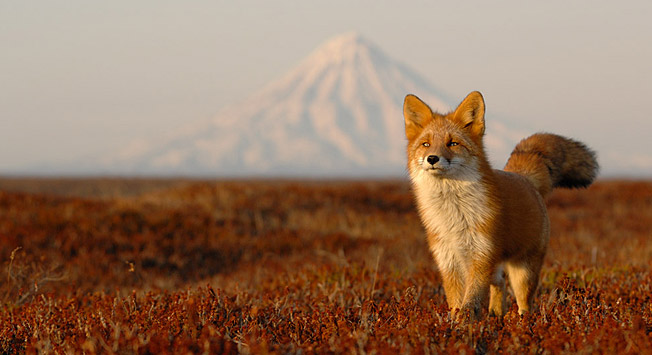 In Kamchatka you can find all imaginable kinds of authentic wild beauty if you’re not afraid to make a serious effort to see it. There are rivers teeming with life both within it and on its banks that border death-dealing volcanoes, perpetual snow bordering hot springs, taiga bordering on tundra and wild animals living next to humans. This is how photographer and naturalist Igor Shpilenoktries to depict this amazing world in his book The Kamchatka I Love. “When on a silent morning you sit down on the bank of Lake Kurile with a camera in your hand and look at the sun rising over the Ilinsky volcano, it seems that all around the eternal landscapes have been frozen, that it was like that before you and will always be like that,” Shpilenok writes. “And it’s only an unexpected trembling of the earth – the beginning of an earthquake – that suddenly reminds you that this is one of the most unstable places on earth and that at any moment something grandiose can happen.” 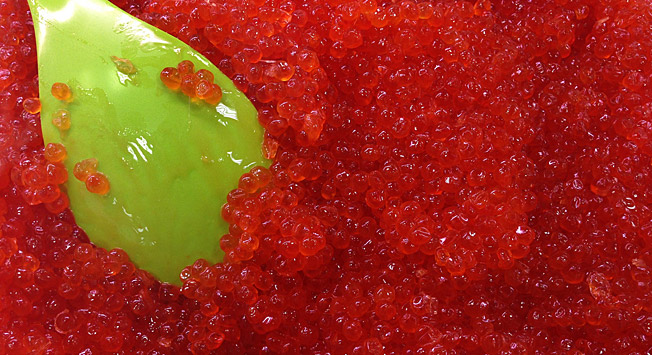 Not long ago local residents couldn’t sleep because of the noise made at night by spawning salmon fish—these fish were that numerous. Kamchatka’s low population density and scarce human settlement ensures that the environment is clean and the water pure. The main staple of local cuisine is Pacific fish such as sockeye salmon, hunchback salmon, coho salmon, chinook salmon, scallops, squid and the famous Kamchatka crab. “Pyatiminutka” red caviar is available only during the summer fishing season, a luxury only available in Kamchatka. You can prepare it right on the river bank along with freshly caught fish and try it on the spot. Even if you manage to visit Kamchatka only in winter, the caviar you’ll find is much fresher than what you can get on the mainland (that’s how Kamchatka residents refer to the rest of Russia). In the local fish market the price for a kilogram of this edible souvenir starts at 2,000 rubles (about $40),  although if you ask kindly the vendors may give you a few spoonfuls for free.

A sensation of wilderness
​Although Petropavlovsk-Kamchatsky and St. Petersburg are almost the same age, you get the impression that humans have been living here for no more than 50 years. The entire peninsula has only 350,000 inhabitants and the capital, with a population of 170,000, is not known for its bright lights or nightlife that you’d expect to find in big cities. Until 1990 foreigners couldn’t set foot in Kamchatka and even Russians needed a special permit to come. Now it’s open to everyone. These factors, together with the geyser rivers and valleys, the volcanoes’ huge calderas and the perpetually changing landscapes after volcanic eruptions make Kamchatka one of the few places on earth where you can still feel like an explorer. This land was discovered more than 300 years ago, but even today so little is known about it.

See the 360° Aerial Panorama of Uzon Volcanic Caldera by airpano.com

Even though the salaries of some local residents, such as those serving in the military, range from 50,000-80,000 rubles, the average wage for ordinary laborers is approximately 15,000-20,000 rubles. A holiday in Kamchatka is comparable in price to a safari in Tanzania or for a cruise around Australia. However, due to the weakening of the ruble, Kamchatka has recently become more affordable for foreign travelers.

Russia’s only victory in the Crimean War
The Crimean War of the 1850s was fought here? This unexpected fact is initially perceived with incredulity, but it turns out to be true. A victory here was felt as a ray of sunshine on a cloudy day, although in Paris, and especially London, it was a sorrowful event. While the Crimean War – which was to prove a difficult loss for Russia – was in full swing (1853-1856), Petropavlovsk-Kamchatsky’s small garrison managed to prevail over the superior forces of an Anglo-French squadron that attacked the port of Petropavlovsk, at the time Russia’s main bastion in the Far East.