Buddhism in Siberia: Some truths 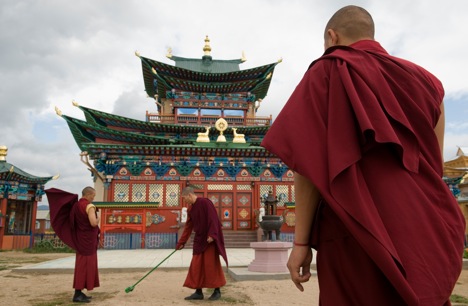 RIA Novosti/Sergei Guneev
Not closely associated with Russia, the Buryat customs, hybrid architecture and eternal relics, showcase an altogether different aspect of the country. RIR has assembled an informative guide to Buddhism beyond the Urals.

Buddhism spread in Russia, to Siberia, in the 17th century. It permeated across to these chilly lands from Mongolia and Tibet, after originating in the northern reaches of India. The Tibetan, ‘Mahayana’ school of Buddhism is what spread into Russia.

Buddhism is not the most practiced religion in Russia. According to the Levada Centre, only 1% of the country’s people call themselves Buddhist. Most live in Siberia, in the Republics of Tuva and Buryatia, in the Zabaykalsky Territory, and in the Irkutsk Region (these regions are between 3700 and 6300 kilometres away from Moscow). There are Buddhist communities and temples in Moscow and St. Petersburg. To learn in detail about the traditions, history and spirit of Buddhism in Russia and how it differs from Tibetan Buddhism, a visit to Siberia is a must.

1. In the Tibetan tradition, a “datsan” is a department or a part in a university. Once Buddhism in Siberia became isolated from traditions of other practicing countries for a long time, the word “datsan” has come to refer not only to a university, but to an entire monastic complex. 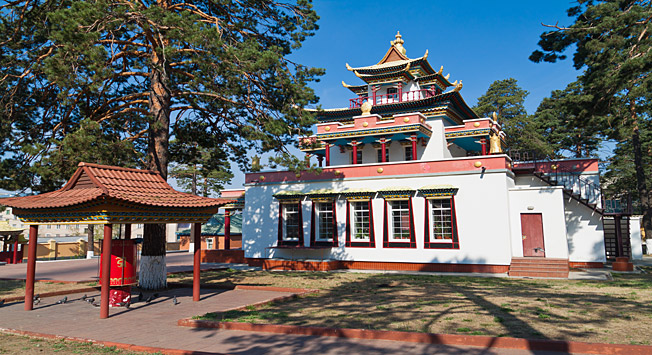 2. The first “datsans” in Buryatia and Tuva, in the 1740s, were mobile and made not of stone, but of felt, so they looked like portable yurts early in their history. This is not surprising, as yurts were the Buryat peoples’ traditional dwelling. ‘Felt’ “datsans” were later replaced by wooden ones, and still later, by those made of stone.

A hybrid mix of architectural elements from Buryat culture, the Buddhist canon and Russian and Chinese architectural traditions emerged over the centuries. For example, the upward curved ends of gabled roofs in Siberian ‘datsans’ are a tradition that originated in Mongolia and China. The eclecticism of Siberia’s Buddhist temples’ differentiates them from Central Asian monasteries. 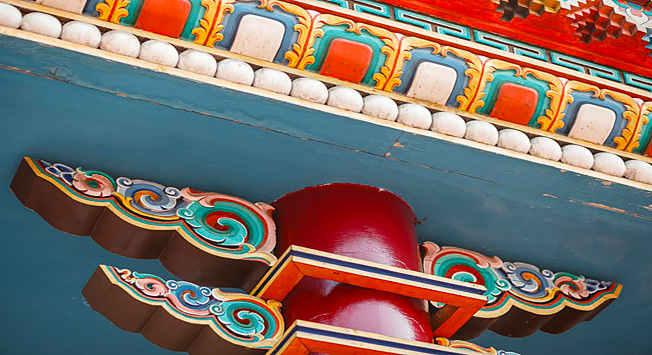 3. Since ancient times, shamanistic traditions have been quite strong in the regions of Transbaikal (near Lake Baikal), Tuva and Buryatia. As a result, the growth of Buddhism in Siberia was initially a contentious process: lamas (Buddhist monks) would hunt down ‘shamans’ and burn their ritual objects, especially talismans made of wolf teeth, reindeer horns or bird feathers. 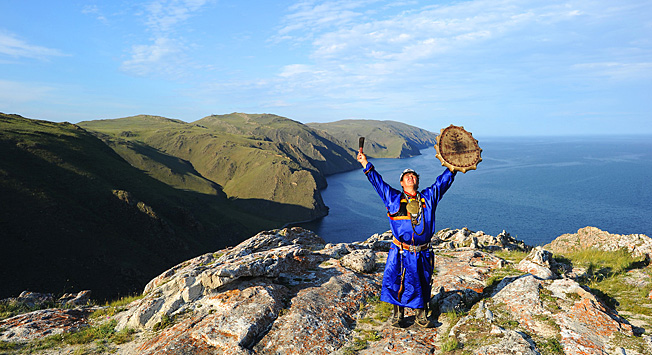 4. Lamas (monks) in Siberia did not always have an easy life, either. In the 20th century, many Buddhist monasteries were destroyed and lamas, like Orthodox priests, were persecuted.

In the 1930s many lamas were shot for “counter-revolutionary activity” in the Aginsky “Datsan”, one of the oldest and most beautiful monasteries in the Zabaykalsky Territory. The “datsan” itself was closed, its buildings torn down and its valuables, art and ritualistic objects, ended up in museums in Moscow, St. Petersburg and Ulan-Ude, the capital of the Republic of Buryatia. 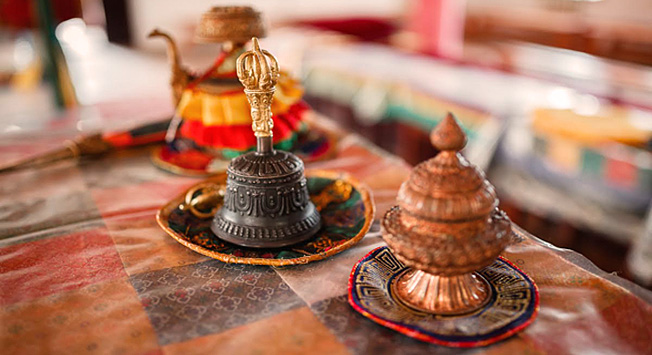 5. Siberia’s largest Buddhist monastery and learning centre is the Ivolginsky Datsan near Ulan-Ude in Buryatia. The construction began soon after World War II, during the tenure of Stalin, when authorities offered a small plot of land near the village of Verkhnyaya Ivolga, and a prosperous Buryat family gave their own house to serve as a temple.

Today, this is the most revered monument of architecture and culture in Buryatia, comprising 10 temples, a university building, a museum, a guesthouse, an open-air cage with roe bucks and a greenhouse with a ‘Bodhi’ tree, which is sacred for Buddhists, because the ‘Buddha’ attained salvation or ‘nirvana’ under such a tree. 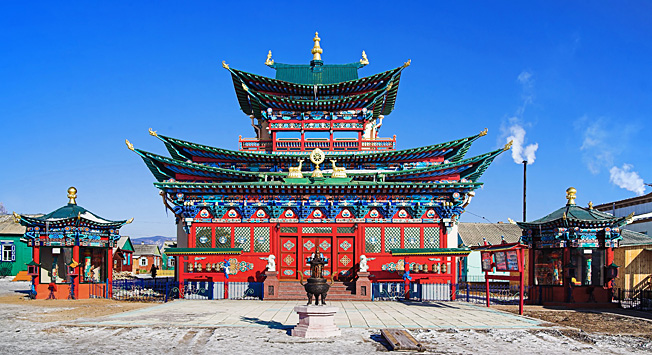 6. The Ivolginsky Datsan holds one of the most important holy relics not only of Siberia, but of all of Russia: the eternal body of Lama Dashi-Dorzho Itigilov, who was the leader of Siberian Buddhists at the beginning of the 20th century. He died in the lotus position in 1927, but his body is well preserved and remains a subject of medical and biological research for 21st century Russian scientists. Now Itigilov’s body is kept in a special blessed palace on the territory of the Ivolginsky Datsan. 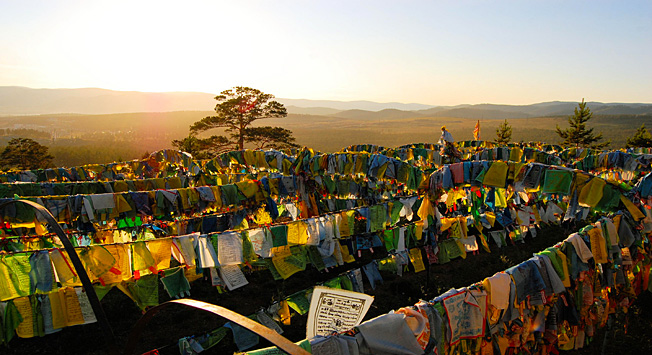 7. If you are going to visit a Buddhist monastery, there are a few rules that you need to keep in mind. You should tour the temple walking clockwise – such a circular path is called “goroo” and symbolizes a rite of purification. On the way you’ll see the “khurde” drums, which contain the texts of prayers. You can make them rotate – this gesture is more or less equivalent to a prayer among Buddhists. 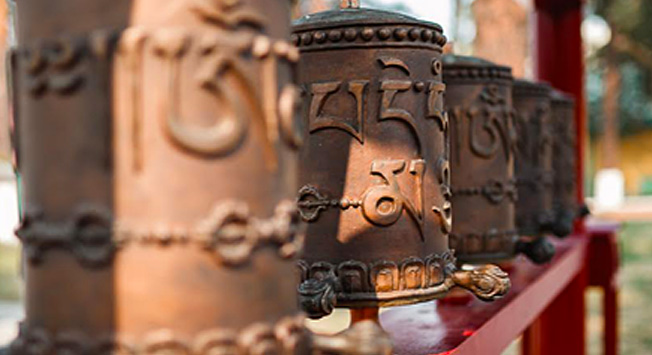 You can visit all open temples and non-Buddhists are allowed to attend services. Inside the temple it’s best not to turn one’s back to the statues of Buddha or cross your legs or arms when sitting on the low benches along the walls. Your clothes should be modest – women should avoid mini-skirts and short tops – and you should remove any kind of headgear. You cannot smoke or throw away garbage on the territory of a datsan and in some temples taking photos is forbidden. Pay attention to all posted notices.