An acquaintance with native Crimean culture 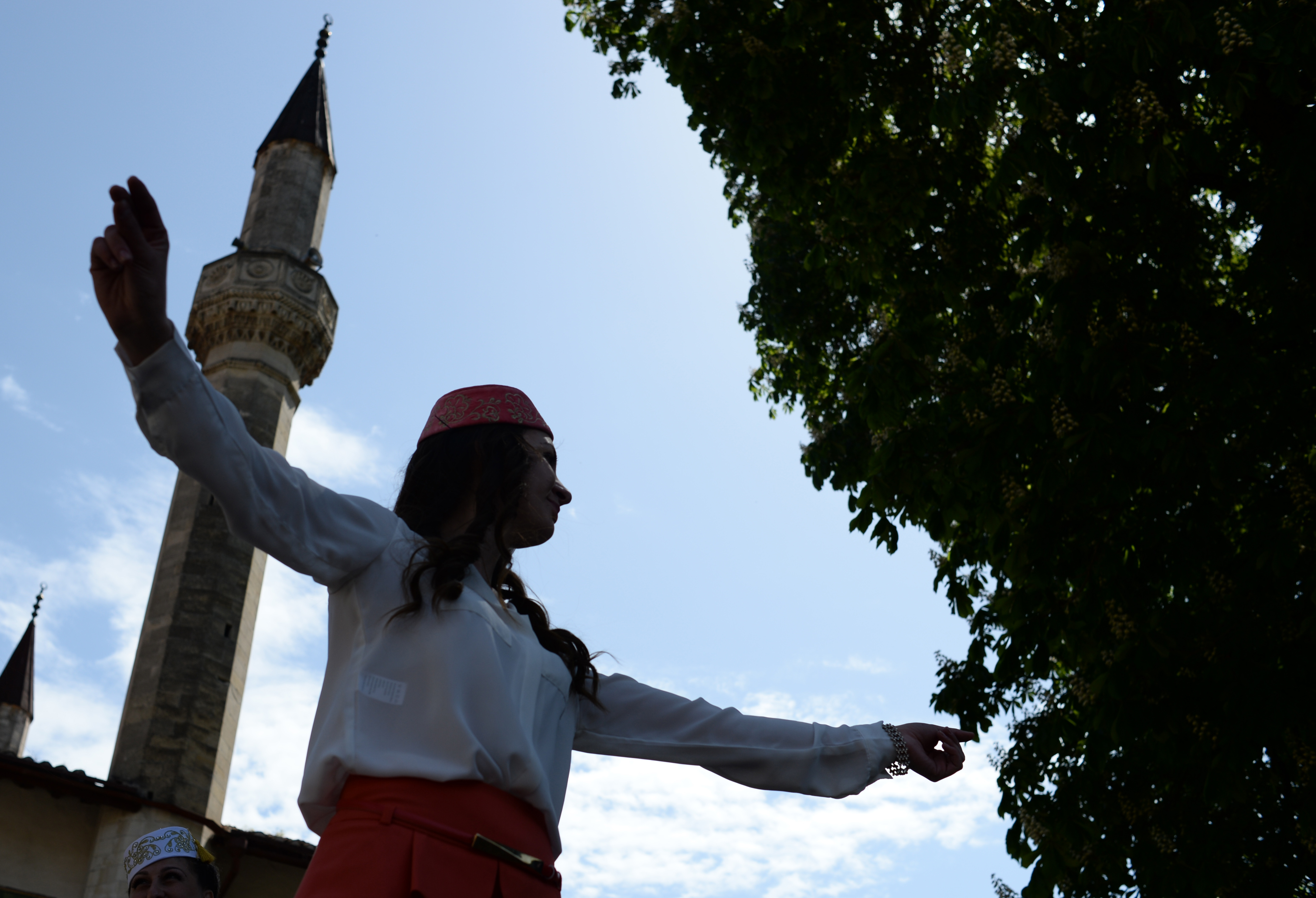 A young woman performs traditional dance of the Crimean Tatars.

RIA Novosti/Kostantin Chalabov
The Crimean peninsula, which merged with Russia after a referendum in March 2014, is among the country’s most multi-ethnic regions. There are around 125 distinct ethnic groups which co-exist in Crimea, including native Crimean Tatars, Crimean Karaites and the Krymchaks.

Crimean Tatars are the largest ethnic group among the native people of Crimea, with a population of around 200,000 of them on the peninsula. They are the proud descendants of Turkic-speaking, Caucasian and other tribes that settled in Eastern Europe before the Mongol invasion of 1223.

After the Russian empire’s victory in the 1783 war against the Ottoman Empire, over hundred thousand Crimean Tatars left, mostly going to Turkey. Those who remained repeatedly rebelled against the tsar. Accusations levelled against Crimean Tatars of collaborating with the Nazi forces during the Second World War (and some other people on the peninsula) became a pretext for mass deportation of the Tatars, mainly to Central Asia, in May 1944.  More than 228,000 people were deported from the peninsula, 191,000 of whom were Crimean Tatars. Unlike the other deported people, who were allowed to return to their homeland in 1956, Crimean Tatars were deprived of this right until 1989.

Today, in the most densely populated areas (the southern shore, Simferopol, the Bakhchisarai, Belogorsk and Sudak areas) you can hear the Crimean Tatar language, taste their local cuisine and stay in hotels designed in their ethnic style. 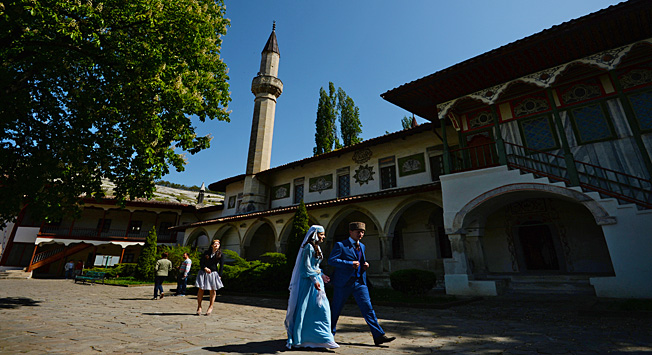 In Simferopol, there is an ethnographic museum, and in Yevpatoria you can visit the “Odun-Bazar” cultural-ethnographic centre, where tours are available dedicated to culinary and ritualistic traditions. For example, it is possible to participate in an ancient matchmaking rite, and even play the lead role, dressed in a traditional costume with henna-dyed hands.

Among Tatar families it remains customary to have many children, who are given ‘eastern’ names like Zarema, Elvira, Ayder and so on. Mixed marriages are not a rarity, but they are not desirable, even frowned upon. The designing of houses, even modern ones, include stylistically eastern and Islamic elements; you can usually see a decorative dish or a framed leather cloth with an extract form the Koran hanging on the wall.

Some traditions that are inherently characteristic of Crimean Tatars are also close to those of another native people of the region: the Crimean Karaites. This is one of the most numerically few peoples on the planet and 535 of them – a quarter of all the representatives of this ethnic group – live in Crimea. At the beginning of the 20th century they numbered 8,000. The number of Crimean Karaites was catastrophically reduced by wars, repressions, starvation and assimilation.

“These are the only ones among the current inhabitants of Crimea to be the descendants of cave city-dwellers,” says Yuri Polkanov, the president of the Scientific Council of Crimean Karaites. “Today the biggest community in the world (300 people) lives in Simferopol.” 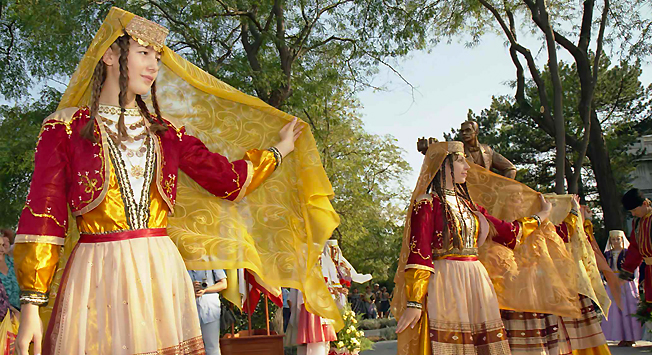 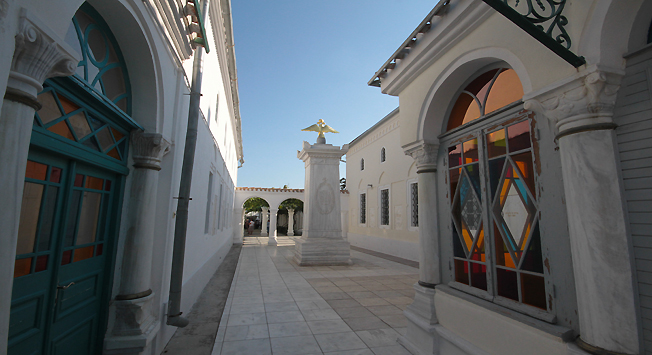 Nearby you can try their traditional cuisine. Most renowned are the Crimean Karaites' pastries with mutton (karaimskie pirozhki), “katlama” (a kind of flat, round-shaped bread) and “khamur-dolma” (a kind of small dumpling).

Crimean Karaites are often confused with Krymchaks. They do indeed have some common linguistic and cultural traits, but their religions are different. Тhе first profess Karaism, the latter Judaism. This is one of the reasons why nowadays there are so few Krymchaks left in the region – just 228 of them to be exact. During World War II the Nazis slaughtered 6,000 Krymchaks together with the Jews. In the Museum of Krymchaks in Simferopol an entire room is devoted to the victims of the Holocaust, and at the 10th kilometer of the highway to Feodosia there is a memorial to the thousands of people who were shot in December 1941.

Dora Pirkova, president of the Society for the Diffusion of Krymchak Culture, lost many relatives during the war. She grew up in a family that spoke the Krymchak language and cooked traditional Krymchak dishes. Today few families like this are left.

“Krymchaks have been assimilated,” explains Pirkova. “Essentially, only a fourth of the children now are Krymchak. Parents give their children Russian names and only the elderly know the language.”

They try to keep the traditions alive within the community. Every year at the end of summer celebrations of Krymchak culture are held in the towns of Crimea and people gather for festivals. Yet, in 30-50 years this people risks being completely assimilated. So, it’s better to get acquainted with their culture while you still can.