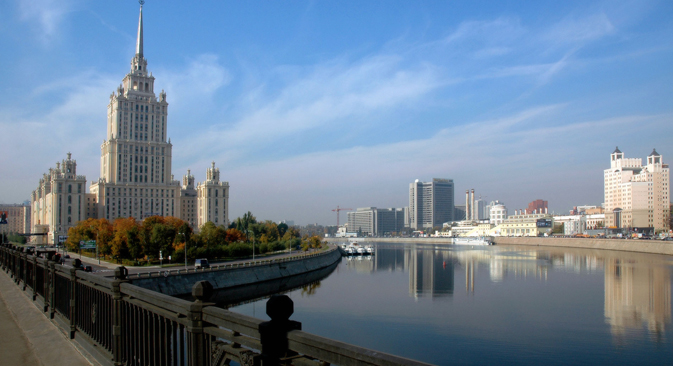 The hotels built in Moscow at the height of the Soviet Union’s rush toward urbanization (from the 1930s to the 1950s) created a new facade for the city. They altered the Russian capital’s former image, which had been defined by its pre-revolutionary “bourgeois” architecture, once and for all.

Soviet authorities built grand hotels and edifices to duly impress visiting foreign delegations, but in the process tore down entire blocks, drained swamps and built new bridges. Not only did the new hotels change the city's skyline, they also made a notable contribution to urban folklore, soon becoming the centre of everyone's attention and hot topics of conversation.

Some hotels were lodged in neo-classical Stalinist high-rises (Leningradskaya and Ukraina), while others were constructed using original designs in the Stalinist Empire style (Moskva and Pekin). Yet another group of hotels was installed in pre-revolutionary buildings that had undergone complete renovation. An example from this is the Sovetskaya Hotel, which inherited the quarters of Yar, one of Moscow’s largest 19th-century restaurants. 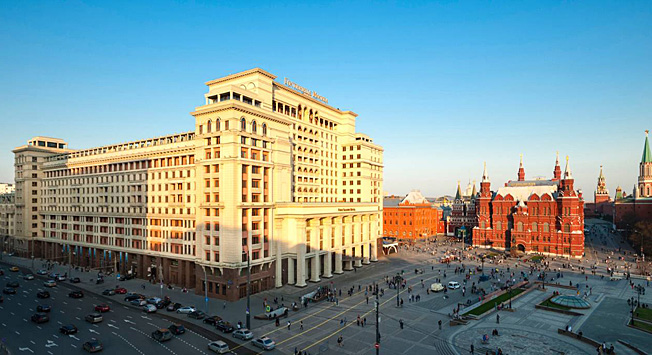 Built in the late 1930s on Manezhnaya Square directly in front of the pre-revolutionary Hotel National and the Hotel Metropol, the Moskva was the first major Soviet hotel. The original building has been lost as it was demolished in the early 2000s. It was later replaced by an exact replica, which now houses the Four Season Hotel, Moscow.

The right wing of the Moskva Hotel is somewhat different from the left. Legend has it that Stalin himself was the person who approved the final design. The Soviet leader was offered two different facade designs, separated by a line, and he signed the project right on the line. Since nobody dared ask Stalin to be more specific, the architects blended the two designs into one building. The right-hand part was more austere, while the left-hand part featured numerous decorative elements. 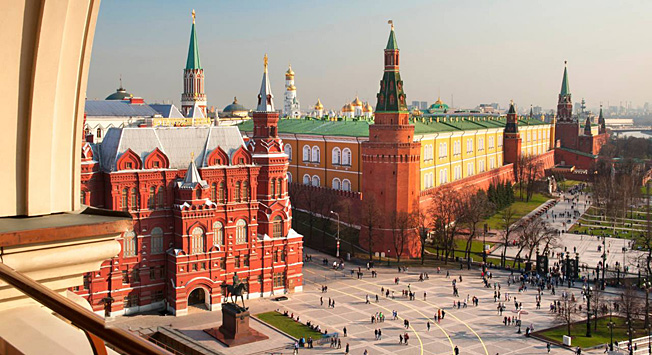 A view from the room of the Four Seasons Hotel Moscow. Source: Moskva Hotel press photo

During the course of reconstruction, a decision was made to retain the difference between the two halves of the facade. 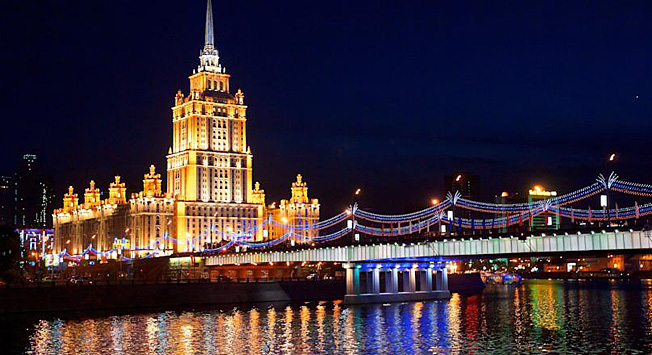 The Ukraina Hotel, located on the west bank of the Moskva River, opposite the government headquarters (commonly referred to as the "White House"), dates back to the 1950s. For quite a while it ranked among Europe's tallest hotels; its height including the spire is 206 metres. This historic building is today occupied by the Radisson Royal Hotel.

The hotel was the seventh and last of Moscow's Seven Sisters skyscrapers. Since its construction began only after Stalin's death, its fate was determined by the next Soviet leader, Nikita Khrushchev. Along with his denunciation of Stalin's personality cult, Khrushchev is also famous for his innovative approach to housing shortages in the Soviet Union.

To resettle tenants from communal flats, he built standard five-story apartment blocks – the "khrushchevkas." An urban legend goes that Khrushchev said that the Soviet Union didn't have enough money to maintain such a grand hotel and ordered the builders to transform its left and its right wing into apartment blocks (about 60 percent of the hotel rooms). It is possible that this legend has some truth to it, as ordinary city dwellers still live in the left and right wings of the hotel. 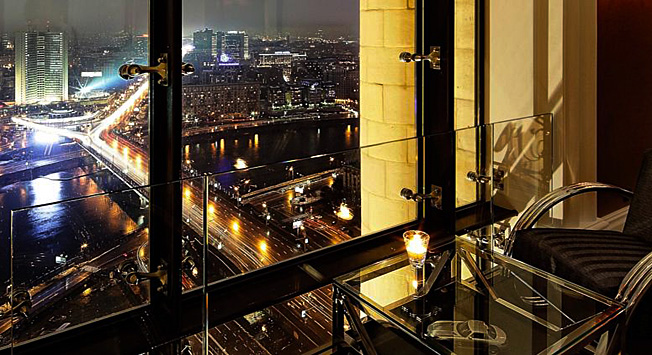 Another legend involves the diorama "Moscow, Capital of the USSR," on display on the first floor. The 300-metre maquette of the Russian capital was built in 1977 and placed on display in New York. The miniature Moscow was a huge success in the U.S. with 30 to 40 visitors attending the exposition every day. Rumour has it that the astronaut Neil Armstrong asked the Soviet government to sell the impressive exhibit to him, only to receive the terse reply: "Moscow is not for sale." 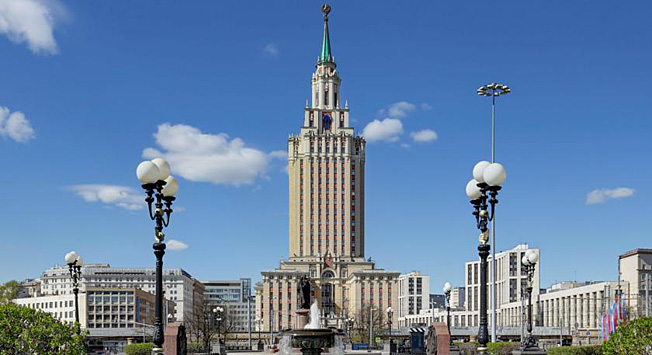 Leningradskaya was built in 1949–1952 not far from Komsomolskaya, or Three Station, Square. It is the shortest of the Seven Sisters skyscrapers – a modest 134 meters including the spire. Today the building is home to the Hilton Moscow Leningradskaya.

This hotel is notable for its interiors, which is pretty rare for a Stalinist-era building. It features ancient Russian and Russian Baroque motifs that give the hotel entrance area an ambience of a medieval castle: 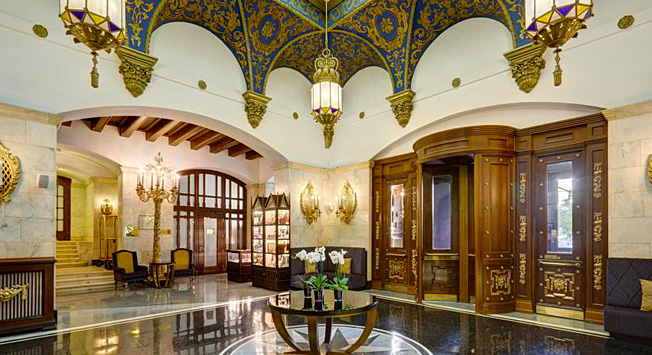 The interior also features a Venetian-style glass ceiling, multi-layered hanging lamps the length of an entire story and an elevator with gilded carvings and gold-plated bronze coffers on the ceiling. Between the seventh and the eighth floors the right side front staircase is decorated with world's longest garland hanging lamp, with its amazing 15.5 meter (about 51 feet) length registered in the Guinness Book of Records: 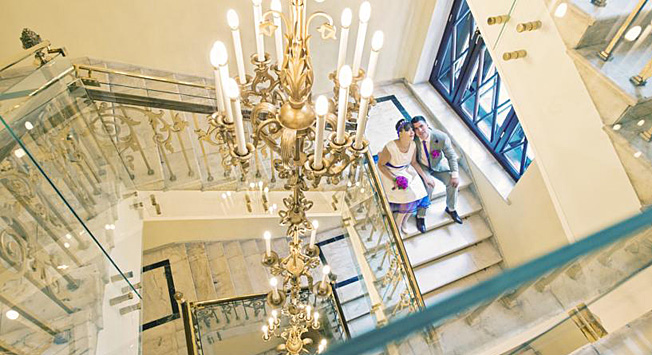 The foot of the stairs is guarded by bronze mythical beasts that resemble lionesses. A legend proposes that these statues were brought here by Soviet soldiers from Berlin's Reichstag after World War II. The hotel staff even refers to them as "trophies." The entrance hall of the hotel is open to visitors and guided tours.