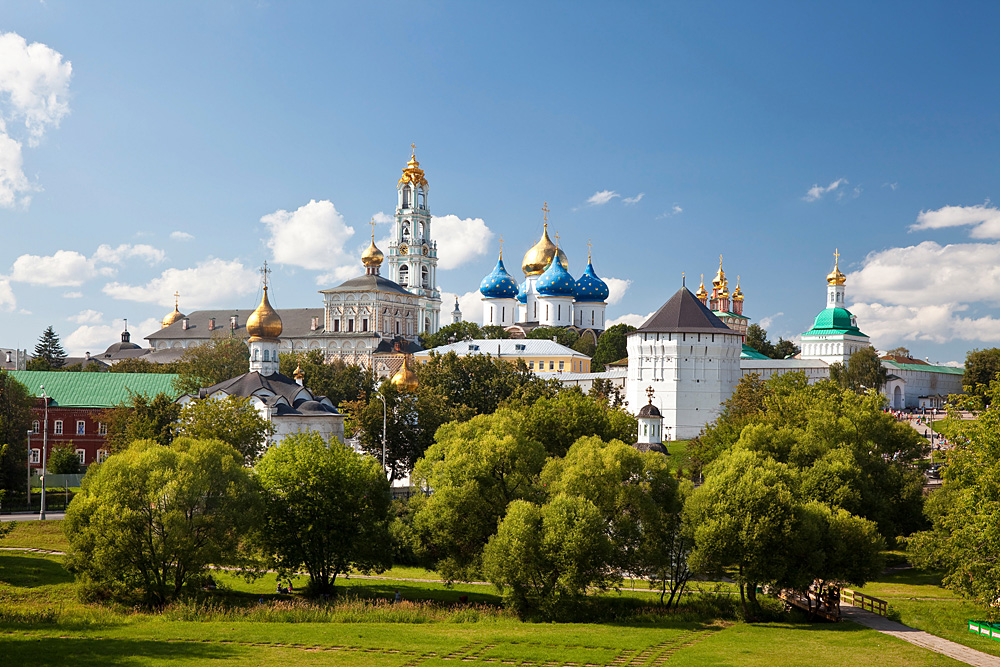 Lori/Legion-Media
From the hometown of India’s first Russian friend Afanasy Nikitin to one of the world’s largest open-air aviation museums, several interesting places are just a stone’s throw away from Moscow.

To get a glimpse of Russia’s vastness and diversity, you don’t have to travel all the way to Siberia. A few places are easily accessible for day trips from Moscow

Located 70 km (43 miles) northeast of Moscow, the town of Sergeyev Posad is home to the Trinity Lavra of St. Sergius, the most important Russian Orthodox monastery in the country.

Few places in the country demonstrate the architectural journey that Russian churches undertook from the 14th century to the present day. St. Sergius of Radonezh, a venerated Russian saint, founded the monastery in 1345. Numerous structures were built in the compound in the subsequent centuries.

Art-lovers will appreciate the replica works of Russian icon painters Andrei Rublev and Daniil Chyorny that don the entrance walls. The great painters were summoned to decorate the main 15th century cathedral with frescoes.  Another highlight of the monastery complex is the six-pillared Assumption Cathedral, which was commissioned by Ivan the Terrible in 1559.

Trains leave every 30 minutes for Sergeyev Posad from Moscow’s Yaroslavskiy Railway Station. You can also take Bus Number 388 from the VDNKh metro station.

A pilgrimage spot for fans of Anton Chekhov, Melikhovo, 74 km (46 miles) from Moscow, is the former estate of the great playwright.

Chekhov moved to the estate in 1892 from Moscow and lived there till 1899. This is where he wrote classics such as The Seagull and his famous trilogy: The Man in a Case, About Love, and Gooseberries.

“My estate’s not much, but the surroundings are magnificent,” Chekhov wrote about Melikhovo.  The estate has been converted into a museum where the main house has preserved the 19th century ambience. You can visit Chekhov’s study as well as the cottage where he wrote The Seagull.

Each May the estate hosts a weeklong theatre festival.

Suburban trains (elechtrichkas) run regularly from Moscow’s Kursky Railway Station to the town of Chekhov. From Chekhov take bus number 25 to the estate.

Nobody would ever visit the otherwise nondescript town of Monino, 33 km (20.5 miles) east of Moscow, if it didn’t have one of the world’s greatest open-air aviation museums.

The Central Air Force Museum, which is in Monino’s airfield, has 173 Russian aircraft and over 100 aircraft engines. The facility was an airbase from 1932 to 1956, when it was converted into a museum.

Along with aircraft from the Second World War, the Mi-12 Homer double rotor helicopter and the Bartini Beriev VVA-14 amphibious aircraft, the museum also has exhibits related to military aviation history such as the uniform of captured U2 pilot Gary Powers.

There’s no better way to learn about the history of Russian military aviation than taking a guided tour conducted by ex-pilots. Media reports indicate that the museum will be closed to the public from July 2016, so make a dash for it, if you’re a military aviation enthusiast.

Suburban trains (elechtrichkas) leave regularly for Monino from the Yaroslavskiy Railway Station.  The airfield is surrounded by defense installations and is not a walking distance from the station. Take a taxi from the station to avoid bus routes that pass through military areas.

You can also take bus number 322 to Monino from the Partizanskaya Metro Station.

The historic city, which is at the confluence of the Volga and Kotorosi rivers, is about 250 km (155 miles) northeast of Moscow. A part of the Golden Ring, the historic city center is a UNESCO World Heritage Site.

The city center, which is compact and can easily be explored by foot, has around 140 protected monuments. The riverfront houses several old and famous monasteries.

The Spaso-Preobrazhensky Monastery, which is believed to have been founded in the 12th century, is one of the city’s most well preserved religious complexes. Visitors are allowed to enter the 32-meter high bell tower, which was built in the mid-16th century. The views are absolutely stunning from the top.

There are several nice cafes with views of the river in the city center.

Long-distance trains depart regularly for Yaroslavl from the Yaroslavskiy Railway Station.  It is a four-hour journey on most trains, although there is one fast service.

If a find a journey to Yaroslavl too tiring for a day trip, a good alternative is the Tver, which is 162 km (100 miles) north of Moscow.

The city, which is at the confluence of the Tvertsa and Volga rivers, was founded in 1135.  Most of the ancient buildings were destroyed by a fire in 1763, after which it was redesigned for Empress Catherine the Great as a “road palace” to rest on the journey between Moscow and St. Petersburg.

The riverfront has a nice collection of 18th and 19th century building and churches. The city center is also compact and can easily be explored by foot.

One of the most popular gathering places in the city is the square housing the statue to Afanasy Nikitin, one of Tver’s greatest sons.  Nikitin, a 15th century merchant was one of the first Europeans to travel to and document his visit to India.

Another popular hangout is the embankment from where you can see the Starovolzhsky Bridge.

Trains regularly depart for Tver from the Leningradskiy Station. The faster trains take a little over an hour to get to Tver.