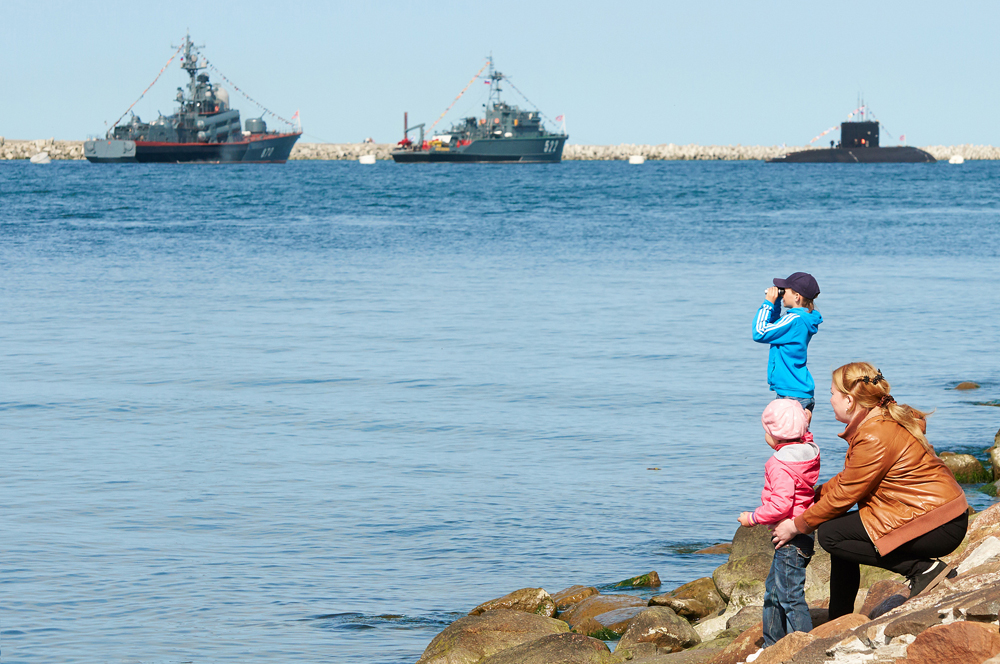 The naval base of the Baltic Sea Fleet is located in Baltiysk.

Lori/Legion-Media
With endless sandy beaches and no tourists, Baltiysk is a strange place. It has impressive fortress ruins with no archaeologists, and a deep blue summer sea without being too hot; quite the ideal for independent travel or a romantic getaway.

Baltiysk town for many years was not open to ordinary visitors. The largest Russian naval base on the Baltic Sea was mostly used as temporary barracks for young sailors who would go there with their families for military service. After their service, many of them left to spend their lives in places with a more welcoming climate and more employment opportunities.

Despite all of these demographic challenges, Baltiysk has one of the youngest populations of any city in Russia. Most of its inhabitants are in their early 30s.

The tourist attractions in Baltiysk, in contrast, are mostly quite old. Even the railway, which connects the town with Kaliningrad, is still not electrified and the locomotive runs on diesel. However, this windy town right at the edge of the Kaliningrad Region is quite possibly travel’s next happening place to be.

You can hardly find such wide (more than 30 metres) and endless sandy beaches anywhere in the region. The “dancing” sand dunes on the Baltic Spit are the main attraction here. Amazingly beautiful, they can reach 40 metres high and are able to literally “move” every day depending on the direction of the wind. You must use caution when riding a bike, as there could be deep holes below: from former entrances to abandoned underground bunkers.

The beaches enchant with their rich yellow colour from the many bits of amber pieces that appear after storms. For centuries, amber fever attracted people looking to strike it rich, to the region. Even the increased extraction of natural amber today does not deplete your chances of bringing a shiny souvenir home from the Baltic shore.

You can get to the Baltic Spit from the centre of Baltiysk by regular ferry, on which you can take your car, or by a private tiny day cruiser. Both are cheap and the journey takes no more than 20 minutes.

Despite being used by huge warships and tiny fishermen’s boats, the harbour is filled with numerous white swans. They are spoiled by locals and behave like domesticated pets, constantly begging for food.

Expect glorious sunsets and starry nights almost throughout the year, because there are very few buildings and electric lights in the town.

Gone with the wind

With strong winds blowing all year long, Baltiysk is an ideal destination for all kinds of surfing. There are no dedicated sport facilities on the beach, so you can practice on your own or with friends, without the prying eyes of judgmental crowds. Sailing is also an option.

When you feel you’ve had enough of nature and are ready for more cultural impressions, you should head to the centre of Baltiysk. The heart of the town, which was founded in the 14th century, is the pentagonal star-shaped fortress Pillau. The Pillau Citadel is the only place in town that is best seen on Google Earth – its perfect star shape is quite impressive. Its thick brick walls have been in use for hundreds of years. Their sturdiness is probably why the fortress still serves as a functional military base.

A German-style urban quarter is another place you shouldn’t miss. Most of the buildings were constructed at the beginning of the 20th century, to host the German Army. The Naval Cathedral of St. George, which currently serves as an Orthodox Church, is apparently the oldest building in the district. It was originally a gothic church. The old German cemetery here now looks more like a landscape park with a few neat white crosses under bushy trees.

But the most impressive items of German heritage here are located outside the town, in the middle of the Baltic Spit. Huge metal constructions, former hangars for hydroplanes and other aircraft, make the landscape here look like a post-apocalypse movie and attract photographers and sci-fi fans.

The Neutief Base was built in the 1930s. At that time it was quite advanced, with heated runways placed at 45-degree angles so that planes could take off and land at any time of year and in any weather.

The architectural jewel of Baltiysk is its 33-metre high lighthouse. The original structure was built of wood in 1741. In the next century it was rebuilt in stone by an unknown architect. Initially the light was produced by burning vegetable oil, although later it was replaced by petrol. Now the light, which can be seen 16 sea miles away, is electric.

If you like ships, you should come to Baltiysk on Navy Day, which is the last Sunday of July, or on May 9, Victory Day. You can enjoy a spectacular demonstration on either of these days with all types of warships including submarines.

If you can’t be in town on either of these dates, you can always come a week early and watch the rehearsals.