Taliban and the US-Pakistan enterprise 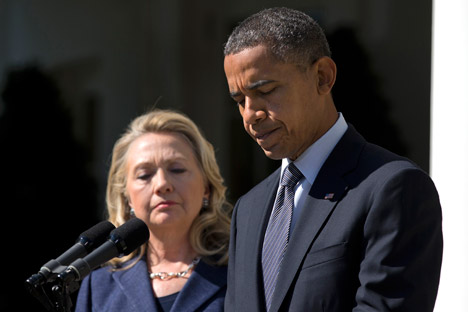 What may appear on the face of it to be a US retreat from Afghanistan could actually be intended to pave the way for the return of the Taliban regime in Kabul and in turn open up the avenues for future western intervention in the region. Source: AP

What may appear to be a US retreat from Afghanistan could actually be intended to pave the way for the return of the Taliban in Kabul and in turn open up the avenues for future western intervention in the region.

The Afghan spy chief is still recovering from an assassination attempt in a hospital in the United States while his headquarters back home in Kabul comes under renewed attack. Nothing could be more embarrassing to the Afghan government than Wednesday’s Taliban attack on the compound of the National Directorate of Security in the heart of Kabul.

The audacity of the attack shows that Taliban can hit with impunity at targets it chooses and no one and nothing is safe and secure in Kabul. The message is blunt and rather ominous. The timing is stunning, since the US President Barack Obama and Afghan President Hamid Karzai just decided between the two of them to accelerate the withdrawal of the American troops.

The Taliban’s intention is of course to demoralise the Afghan intelligence apparatus as a whole. It poses a troubling question: Indeed, how can security be fastened without reliable intelligence inputs?

The single biggest asset of the regime of Najibullah at a comparable point in the Afghan civil war at the end of the 1980s was that even when the enemy was at the gates, he had a masterly grasp of the opponents’ every single move (and likely move) and could plan his countermoves.

To be sure, Karzai will be hard-pressed to operate in an intelligence vacuum. Alongside, the Pakistani agencies are also advancing the ‘political work’ by building bridges between the Taliban and the opportunistic elements belonging to the erstwhile Northern Alliance (especially in the Amu Darya region in northern Afghanistan). There have been meetings held on Uzbek soil between Pakistani operatives and Rashid Dostum. These clandestine dealings hark back to the Pakistani role in the 1990s when the Taliban advance proceeded apace on the military and political track.

All in all, the concerted Pakistani strategy continues to be to create disunity among the Afghan adversaries, which aims at wooing the timeservers within the erstwhile Northern Alliance and thereby preventing a unified anti-Taliban opposition front from forming, while on a parallel track the relentless Taliban attacks are rendering lethal blows (such as Wednesday’s attack in Kabul) to the Afghan state security apparatus, sapping its morale and weakening its ability to function.

The political signal coming out of all this is that the Taliban ultimately hope to be the dominant politico-security entity in the country and to re-establish the Islamic Emirate of Afghanistan on its own terms and ideology. This is despite the Pakistani professions that it favours a broad-based power structure in Afghanistan.

Unfortunately, the regional and international situation is quite conducive for the Taliban’s (and Pakistan’s) political agenda. The contradictions, which it is exploiting, are several. Principal among these are: the war fatigue in the West, the surge of sectarian schism in the Muslim Middle East, discords and differences among the Central Asian states, dissipation of the US-Russia ‘reset’, and the absence of a regional consensus over Afghanistan.

From the US point of view, an Islamist regime in Afghanistan may not be a bad thing to happen – provided, of course, that the Taliban jettison the old links with al-Qaeda (which they are willing to do). The point is, while the spectre of Islamism provides a pretext for western intervention, paradoxically, the Islamist forces also are willing to work as instruments of regional policy for the West.

In fact, what is happening in Mali at the moment should be an eye opener. The initial feeling was that the French military intervention in Mali was a solo act by Paris but increasingly what is emerging is that it forms part of a concerted western strategy toward North Africa of which the Libyan saga as the opening shot.

If the Islamists were the foot soldiers of the western intervention in Libya, they are now becoming the excuse for a seamless western (possibly, NATO) military intervention in North Africa. Why else would Australia volunteer ‘assistance’ for the French enterprise in Mali? What has Australia got to do with Africa?

Don’t be surprised if Libya and Mali are only the proverbial tip of the iceberg. It could next be the turn of Algeria, which, by the way, is also a major oil producing country – and used to be a French colony.

In sum, what may appear on the face of it to be a US retreat from Afghanistan could actually be intended to pave the way for the return of the Taliban regime in Kabul and in turn open up the avenues for future western intervention in the region. After all, while the US’s combat role may be ending, its long-term military presence is being consolidated. Without doubt, as China Daily assesses, Karzai’s recent visit to Washington paves the way for the US-Afghan security pact.

Equally, the chill in the US-Pakistan ties has suddenly become a thing of the past and a new modus vivendi is appearing between the two historic allies even as the crunch time approaches in the Afghan endgame. This mutual accommodation between the US and Pakistan emanates out of a tacit understanding between the two of them apropos the Taliban enterprise.