Keeping the world at bay the Obama way 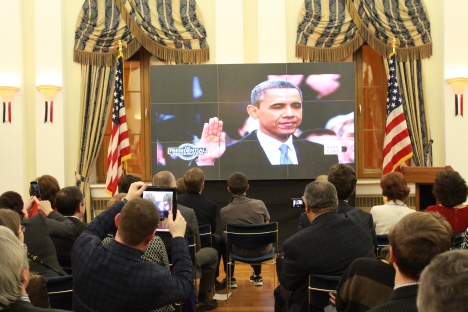 Obama devoted a brief paragraph of less than 150 words to foreign policy in a speech of some 2000 words.

President Barack Obama’s inaugural address on Monday was almost entirely devoted to the domestic economic and social issues in the United States. He spoke hardly anything on foreign policy.

Coll said: “It’s a very conventional sort of ‘managing-the-world’ team that arises out of, I guess, the President’s sense that he doesn’t have transformational ambitions abroad. He just wants to keep the world at bay, so that he can concentrate on the projects he has in mind in domestic policy.”

Obama devoted a brief paragraph of less than 150 words to foreign policy in a speech of some 2000 words. He didn’t mention any single country in particular or any issue, but pithily harped on three ideas without elaborating:

a) the primacy on resolving differences with other nations peacefully and through engagement;

b) the jettisoning of ‘unilateralism’ and an emphatic reliance on alliances and coalitions and institutions to promote US’ global leadership; and

On the face of it, Obama is highly unlikely to join the British-French war on terror in North Africa, leave alone approve the French mission for the “total re-conquest of Mali.” Nor is a US military intervention in Syria on the cards.

The high probability is that the US will enter into direct talks with Iran. The expression “engagement” used by Obama in his speech can be taken as a thinly veiled reference to the new thinking on Iran.

By no means Obama indicated an American retreat from the international arena or an easing of the robust pursuit of US interests abroad. Broadly, as Coll suggested, what we can expect is a continuation of the trends that began with Obama’s first term.