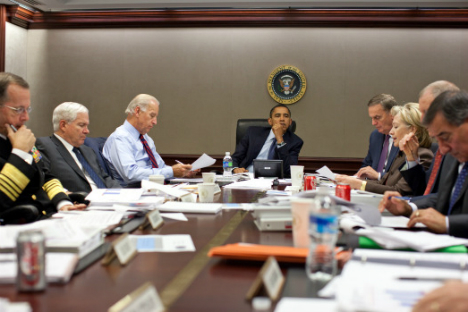 Barack Obama had recently expressed a vague sentiment of support to the Indian claim for a UN SC seat in a speech to the Indian parliamentarians in New Delhi. Source: Getty Images

The hard reality is that the UN Security Council is not open to ‘expansion’ in a conceivable timeframe.

India’s two-year membership of the United Nations Security Council ended this month, unsung and unnoticed by most vigilant Indian pundits. Hardly anyone bothered to recall the swagger in India’s gait as it walked into the hallowed Security Council chamber in New York two years ago; it has just slunk away hugging the corridor, almost incognito.

Two years back, India arrogantly proclaimed that it would never vacate the Security Council again, stressing its determination that a permanent membership of the UNSC was to be a done thing by end-2012. The United States President Barack Obama had recently expressed a vague sentiment of support to the Indian claim for a UN SC seat in a speech to the Indian parliamentarians in New Delhi.

Some sections of the India media loyally joined the chorus that US would ensure the realisation of the Indian dream. But the bandmaster is no longer visible on the stage and the chorus is dumbfounded.

The melodrama over the permanent membership of the UN SC was almost entirely predicated on the expectation that Indian diplomacy in New York would burn the midnight oil to please Washington by harmonising New Delhi’s stance on regional and global issues with the US’s and, in sheer gratitude the Obama administration would reciprocate.

To be fair, Indian diplomats worked hard to build up excellent rapport with the American envoys to the UN and did everything they could to be on the ‘right side of history.’ But Americans are tough taskmasters and they only kept raising the bar of demands. Finally, India failed to make the grade despite its proven agility to pole vault at incredible heights.

This searing experience underscores the sheer naivety that sometimes comes to surround Indian diplomacy. The hard reality is that the UN SC is not open to ‘expansion’ in a conceivable timeframe. Why the highly professional Indian diplomats couldn’t see something that has been so obvious to laymen belies explanation.

Simply put, those who have been lording over the Security Council for decades already – United States, Britain, France, Russia and China – are in no hurry to dilute their cold-war era prerogatives.

On the other hand, countries that have no chance on earth to graduate to the big league would not like Japan, India, Germany or Brazil overtaking them up the greasy pole. They are not enthused by the dismal thought of themselves being substandard material.

All said, therefore, it is next to impossible that a consensus can be formed to shortlist a clutch of ‘regional powers’ to be elevated as full UN SC members. Even if it could somehow be sorted out, that inchoate opinion cannot easily be consolidated as two-thirds majority on the floor of the UN General Assembly.

And, lastly, even if that consolidation were achievable, the Big Five would still need to give unanimous consent, which they won’t for a variety of reasons ranging from pure vanity to shrewd realpolitik. Suffice to say that when the push comes to shove, India cannot even trust the pledges of support given to it so far to claim the mantle of permanent membership of the Security Council.

This being the state of play, it is abominable that India ended up doing futile trapeze acts in the UN SC for the past two years for no purpose other than pleasing Washington. In the process India has made huge compromises over some vital issues of world peace such as Syria or the Palestinian problem by harmonising its voting with the US.

For argument’s sake, this might have proved sound investment if US ambassador Susan Rice finally got elevated as the secretary of state in President Obama’s new cabinet, but in the event that was also not to be.

Indeed, the bane of Indian diplomacy has often been the weakness for exaggerating the ‘human factor’ in diplomacy. This lamentable weakness may be an offshoot of our feudal mindset rather than Indian statecraft as such, but it continues to dog us in the second decade of the 21st century.

Perhaps, personalities make a difference to negotiating tactic. But in any given situation, nation states ultimately seek to be guided by their core interests. To claim Rice as a good friend may help at a working level in New York, but it doesn’t become the raison d’être for crafting policies that run counter to India’s long-term interests.

Take Syria, for instance. Alas, India has fallen between two stools. On the one hand, it couldn’t possibly go the whole hog with the US and its allies who seek a regime change in Syria flouting international law and the UN Charter. Especially so, when Obama administration might have second thoughts about the wisdom of supporting the forces of radical Islam as the US’s instruments of policy in Syria.

Ask not what we can do for you

On the other hand, India abandoned the window of opportunity to work with like-minded countries such as Russia, China, Brazil and South Africa. Indeed, India ‘defected’ from the BRICS grouping to join Rice’s camp on the assumption that it was smart diplomacy.

The result of these trapeze acts is plain to see.  India ended up realizing that all the King’s men and all the King’s horses that the Obama administration could still not muster Bashar Al-Assad’s ouster. Thus, when the balance sheet is drawn, India has managed to displease the US, disillusioned the BRICS and, most important, disappointed Bashar himself whose regime in Damascus was always steadfast in taking stances favorable to India’s interests in regional bodies.

Meanwhile, no one today knows where India really stands with regard to political Islam on the political landscape of the Middle East. As Syria gets torn apart, as Egypt burns and as the bloody massacres in Mali eventually come to light in the coming months, India’s dilemma will only become acute.

Why do such appalling things happen? Shouldn’t there be some stocktaking in South Block and an apportioning of responsibility? Alas, what lingers in the mind is that macabre incident of External Affairs Minister S. M. Krishna reading out his Portuguese counterpart’s speech, blissfully unaware that something was seriously amiss.

To be sure, there has to be a sense of proportions and very serious advance planning when India pitches again for a two-year term in the Security Council. These are not to be trifled with as personality-driven initiatives. There has to be some strategic planning as to what India hopes to achieve on the world stage in a time frame of two years, if it is given another opportunity.