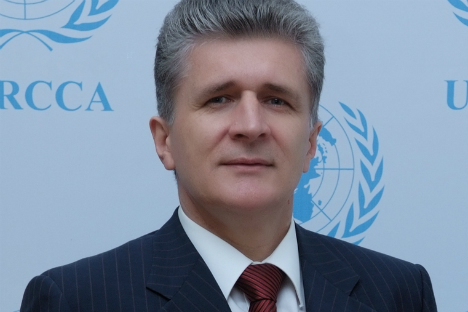 At the moment, there is no regional mechanism in Central Asia that could mediate in intra-regional disputes.

The statement issued in New York earlier this week by the United Nations Security Council regarding the imperatives for ‘preventive diplomacy’ in Central Asia will be of interest against the complex backdrop of regional security.

The statement was prima facie occasioned by the 5th anniversary of the establishment of the UN Regional Centre for Preventive Diplomacy for Central Asia (UNRCCA) in Ashgabat in 2007, but it followed a closed door briefing by the UN Secretary General’s Special Representative Miroslav Jenca regarding regional developments over the past six months.

The Security Council statement is not a ‘binding’ document but its salience lies insofar as it reflects the opinion of the five countries that are permanent members.

The statement gives primacy to strengthening the region’s “capacity to overcome the challenges to peace, stability”; to “fostering good neighbourly relations” among Central Asian states; and “to respond to domestic and international threats to peace.”

It singled out the “impact of transboundary threats” facing the region and the “implications” of management of water and energy resources on regional stability.

Special reference was made to the need to “respond to domestic and transnational threats to peace” in the region and the UNRCCA’s role as a facilitator of the role of Central Asian states in the transition and normalisation of the Afghan situation.

The statement visualises the UNRCCA as a partner and a “tool” to “identify and develop mutually acceptable solutions to existing and emerging problems” in Central Asia.

Presumably, Jenca’s closed-door briefing related to the disquieting templates that have appeared in the recent months in the intra-Central Asian ties and their deleterious impact on the efforts to stabilise Afghanistan.

Indeed, no one expects an outbreak of war involving the Central Asian states. But there have been skirmishes involving border guards, with loss of lives, on the Uzbek-Kyrgyz border in the recent weeks and the virtual closing of the Uzbek-Tajik border.

Plainly put, Uzbekistan’s ties with both Kyrgyzstan and Tajikistan have remained tense. The tensions have been simmering and they hamper the efforts to strengthen regional security even as Afghanistan tiptoes toward a withdrawal of the NATO from combat role in Afghanistan by end-2014.

The point is, there is no regional mechanism in Central Asia that could mediate in intra-regional disputes. The Uzbekistan President Islam Karimov openly warned about the threat of wars breaking out over water disputes. Uzbekistan has a running feud with Tajikistan and has found common cause with Kazakhstan (which has similar dispute with Kyrgyzstan).

An enduring solution probably lies in the kind of regional integration that Russia has proposed, but then, that is easier said than done. A recent commentary in China’s state-owned Global Times identified the factors impeding integration – the rising tide of nationalism, lack of political will to cooperate, widening economic disparities and the “diplomatic strategy” of the regional states to play off the big powers.

The Global Times noted: “The “geopolitical situation in Central Asia is complex. The always fierce competition between big powers has increased discrepancies within the region. The rivalry between the US and Russia… has polarised Central Asian countries. The EU, India, Japan, Turkey and Iran have also claimed their interests in the region and stamped their influence on regional economy, security and culture.

What Global Times prescribed seems to be taking shape. But the ground reality is that there are miles to go before the UNRCCA can cut teeth in Central Asia. The big fish in the Central Asian pond may resent being drawn into the UN net. Besides, boundary disputes and unresolved national questions are linked to national sovereignty and the UN has no record of solving such intractable issues as the borders of Ferghana Valley or the glaciers in the Pamirs.

Even a role by the UN to coordinate the Central Asian part of the Afghan transition and stabilisation agenda cannot easily gain traction since Tashkent or Dushanbe may prefer to deal directly with the Pentagon. All the same, the fact that the P5 could agree on a statement that visualises the UN on the driving seat in the steppes is a step forward in big-power politics.