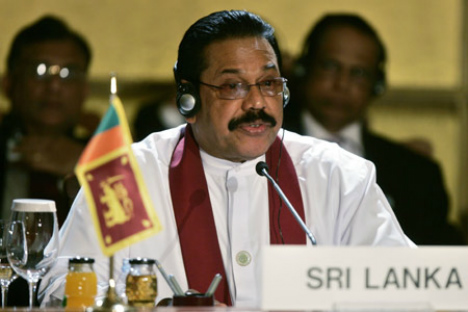 Domestic and western pressure will build up in the coming weeks on Delhi to back a US-sponsored resolution against Sri Lanka coming up in the UN Human Rights Commission in Geneva.

The signs point toward a storm breaking out on the Sri Lankan question, as the month of March approaches. The United States said last Monday it would sponsor another resolution against Sri Lanka, for the second successive year, at the U.N. Human Rights Council (UNHRC) in March for failing to pursue those responsible for abuses as government forces were crushing Tamil rebels in 2009.

Speaking in Colombo on January 28, James Moore, deputy assistant secretary in the United States State Department, was quite blunt:

“The United States has decided to sponsor a procedural resolution at the March 2013 session of the UN Human Rights Council along with international partners.   The resolution will be straightforward, it will be a procedural resolution, and it will build on the 2012 resolution, which called on Sri Lanka to do more to promote reconciliation and accountability.  The resolution will ask the government of Sri Lanka to follow through on its own commitments to its people, including the implementation of the LLRC recommendations.”

Another deputy assistant secretary in the state department Jane Zimmerman who was present at the media interaction in Colombo, brushed aside Colombo’s contention that the process of reconciliation and rehabilitation of the Tamils is being successfully handled – “But you can’t really have reconciliation without accountability.”

The Sri Lanka government has reiterated that it won’t cave in to the US pressure. A new stridency is appearing in Colombo’s voice. The first move has been the slamming of the door on the face of a delegation of the International Bar Association which was planning to visit Sri Lanka, taking exception to the visitors’ alleged intention of undertaking “activity surreptitiously which is of an intrusive nature to the sovereignty of Sri Lanka.”

And now comes the big news that Sri Lanka President Mahinda Rajapaksa has spoken dismissively of the need to grant any more political autonomy for the Sri Lankan Tamils.

Rajapaksa also took a swipe at the US move to take up the war crimes issue at the United Nations. He said the UN Charter does not empower the world body to “interfere in the internal affairs of countries.” He then added, “Sri Lanka’s foreign policy is that of non-alignment. It is necessary for us to build a new era in foreign affairs based on this policy. This is essential for the freedom of Sri Lanka.”

The thinly-veiled warning to Washington is clear – ‘Back off, we intend to be non-aligned vis-à-vis the US’ rebalancing to Asia.’

This is turning out to be a classic pantomime where the real plot is the great game rivalries in the Indian Ocean. China announced recently that the oil and gas pipelines connecting Yunnan with the Bay of Bengal would be operational in June. Again, the control of Gwadar port in Pakistan has passed onto the Chinese hands. Beijing plays down these developments, while perceptions matter in politics. And, at any rate, Sri Lanka becomes a crucial transportation hub for China in the emerging scenario that enables Beijing to break out of its “Malacca Dilemma”.

The gathering storm would engulf India too. Delhi comes under strong compulsion to be seen championing the rights of the Sri Lankan Tamils. The potential of the Sri Lankan issue playing out in the southern Indian state of Tamil Nadu indeed worries the ruling Congress Party. Tamil Nadu sends 39 lawmakers to the 540-member Indian parliament, which could be a crucial contingent in the formation of the next coalition government in Delhi following the elections, which seem to be fast approaching.

Without doubt, China’s influence in the South Asian region worries Delhi, although India’s interest in identifying with the US’ ‘rebalancing’ strategy would be minimal. The legitimacy of China’s growing interests in the Indian Ocean region also cannot be ignored. The litmus test will be how far India’s own interests come under threat.

Domestic and western pressure will build up in the coming weeks on Delhi to back the US-sponsored resolution coming up in the UN Human Rights Commission in Geneva. Without doubt, the US’s resolution is part of a concerted western move. Britain is already invoking the “Commonwealth values.” On the other hand, Delhi is savvy enough to know that Sri Lanka cannot be easily dislodged from its adamant position on the nationality question and, besides, annoying Colombo can only prove to be counterproductive.

Meanwhile, the Sri Lankans are also ace practitioners of diplomacy. Amidst all the tensions building up, Rajapaksa plans to visit India on February 8 – on a religious pilgrimage that takes him to the ancient Buddhist site of Bodh Gaya and the revered Hindu temple at Tirupati.