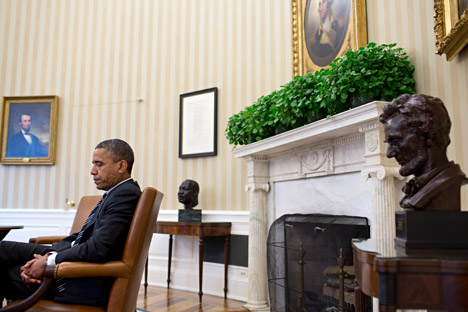 Obama has probably gained some more time and flexibility to work on the other aspects of the US strategy before the war is declared formally over at the end of 2014. Source: Official White House Photo by Pete Souza

The White House has probably gained some more time and flexibility to work on the other aspects of the US strategy before the war is declared formally over.

The State of Union Address by the United States President Barack Obama on Tuesday placed heavy emphasis on the recovery of the American economy. The references to foreign policy were skimpy. It is pointless to say what Obama omitted (which was most major issues in the contemporary world situation), but they notably included such topics as Middle East peace, “rebalancing” in Asia, Iraq, etc.

The speech would add grist to the mill among those US pundits who have been deriding that Obama will be “leading from behind” with smart bombs, intelligence and logistic support in the new American way of waging war. The long-awaited highlight of Tuesday’s address, of course, was Obama’s announcement of the withdrawal of another 34000 American troops within a year.

34000 is an interesting benchmark; it is a wee bit more than half the current size of the US forces, which is 66000-strong. This announcement will go down well in the domestic American public opinion – and that was how it probably was intended. According to the phased withdrawal schedule, something like 5500 US troops will have left Afghanistan by end-May. Another 8500 troops will be withdrawn through November and still another 20000 by end-February next year. Clearly, the attempt is to give the military some degree of flexibility to operate during the coming “fighting season.” The Defence Secretary Leon Panetta said in a statement that Obama has taken the advice of the military commanders in Afghanistan.

On the other hand, Obama has probably gained some more time and flexibility to work on the other aspects of the US strategy before the war is declared formally over at the end of 2014. He vaguely promised that “this drawdown will continue” through 2014.

Indeed, some big decisions are yet to be taken. For instance, what will be the size of the Afghan army that the US and NATO would hope to train? Indeed, how many US troops will remain in Afghanistan beyond 2014? What strategies would underlie the search for a settlement?

Curiously, Obama never once mentioned the Taliban threat as such. Nor did he assess the prevailing security situation in Afghanistan. He characterized the US commitment to Afghanistan merely in terms of the preservation of that country’s unity and sovereignty and the imperative that the country “does not again slip into chaos.” This minimalist agenda ignores any effort to rebuild the Afghan society afterward.

However, Obama confirmed that even beyond 2014 the US troops would selectively undertake combat operations – “counter-terrorism efforts that allow us to pursue the remnants of al-Qaeda and their affiliates.” But then, these “efforts” will primarily mean the deployment of capabilities such as drones and the use of Special Forces. Obama cited the precedents in Yemen, Libya, Somalia, Mali, etc. to underscore that “we don’t need to send tens of thousands of our sons and daughters abroad, or occupy other nations.”

As Fred Kaplan noted in Slate: “In other words, no more Afghanistans… And almost everyone in the House chamber rose in what seemed to be agreement – in part because everyone knew that the constituents at home were nodding in agreement, too. So it was only natural that President Obama barely mentioned foreign and defense policy until 54 minutes after he walked into the chamber—and even drew more of a vague sketch than a policy… And so it should be, after a decade of war-weariness and so little to show for it.”