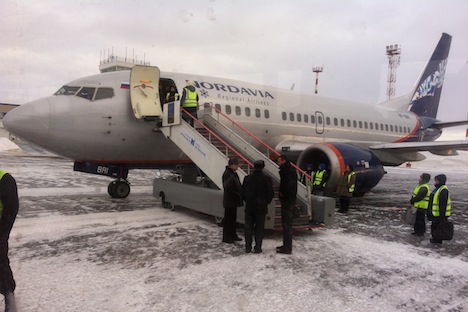 Artem Zagorodnov: "Flying to Murmansk to start my great adventure by jeep, I realized that from Moscow, it’s faster to get to New York than to Vladivostok on Russia's East Coast—where I’m headed by car! " Source: Artem Zagorodnov

Flying to Murmansk to start my great adventure by jeep, I realized that from Moscow, it’s faster to get to New York than to Vladivostok on Russia's East Coast—where I’m headed by car!

Russia's vastness is undeniable. At times it’s even overwhelming, since you can take an 11 hour-flight and never leave the country.

Flying to Murmansk to start my great adventure by jeep, I realized that from Moscow, it’s faster to get to New York than to Vladivostok on Russia's East Coast—where I’m headed by car!

That I took a flight two and a half hours in the opposite direction to begin this journey east struck me as absurd as we landed in Murmansk's International Airport on February 22nd.

Murmansk, nestled in the northwestern corner of Russia close to Norway, deserves attention for several reasons: It is the world's largest city above the Arctic Circle (population: 307,000), yet its port remains ice-free year round thanks to warm Atlantic Sea currents.

The world's largest fleet of nuclear icebreakers keeps the port functional in winter and serves as an economic lifeline to the city.

It was the last city founded in the Russian Empire amid the chaos of World War I (1915) to aid in the delivery of supplies coming in from Europe via the Northern sea route.

This role became even more important during World War II, when the city endured a blockade exceeded only by the siege of Leningrad and was awarded “Hero” status.

A container of nearly five tons of gold (Stalin's payment for war supplies) heading from Murmansk to Europe was sunk during World War II and famously raised in the 1980s by an international team; more recently, the Kursk submarine tragically sank not far off the coast in 2000 and was raised the following year.

Murmansk reached its peak population of 470,000 in the late 1980s before losing about 150,000 people to the economic chaos and migration after the fall of the Soviet Union. While still an important military port, defense spending is nowhere near Cold War levels.

Yet in recent years the Russian government has been pitching the Northern Sea Route as a cheaper and safer alternative than the Suez Canal for shipping goods from booming Asian economies to Europe. The country's northern cities, including Murmansk, stand to benefit from the logistic support required for servicing all of that cargo.

As I was shepherded to my room at the Park Inn by Radisson in this Arctic outpost, my first instinct was to take advantage of the remaining daylight to explore the city (we were at the 69th parallel, after all).

Vakhtan, the local taxi driver I ended up hailing outside my hotel after check-in, migrated to Murmansk in the early 1990s from Baku, Azerbaijan, and acquired Russian citizenship. Twenty years later, he said he has no regrets.

Vakhtan proudly demonstrated the city's commercial port and the nearby monument to the city's “eternal wife,” looking always out to sea in expectation of her husband's return.

While nearly everything here remains geared toward navy servicemen, the city center is dotted with shopping malls, a McDonalds under construction, and other monuments to the onset of globalization.

In the evening we were briefed about the upcoming journey: the creature comforts of this hotel will soon give way to days spent sleeping in a car, a lack of basic hygiene, and bitter disputes between the team members we will accompany (or so we are told). Ten thousand miles of frozen tundra lie ahead...looking forward.