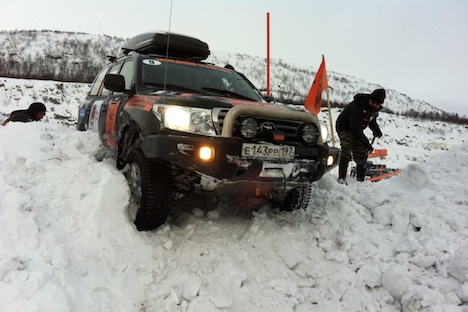 The jeeps are expected to cross snow-covered terrain and snow mounds taller than the average driver. Source: Artem Zagorodnov

This year a team of priests from the Russian Orthodox Church joined the 2013 off-road tour. Before the race begins, one priest reads a somber prayer before blessing every jeep with holy water.

The day begins in the dark. After a 7 a.m. hotel breakfast, we (journalists in minibuses and participants in their respective jeeps) congregate around a lighthouse overlooking Murmansk harbor and, beyond that, the Arctic Ocean. This is where each year's Expedition officially begins, with a lighthouse in Vladivostok a painstaking 10,000 miles down the road.

This year, we are joined by a team of priests from the Russian Orthodox Church. Before the race begins, one priest reads a somber prayer before blessing every jeep with holy water. Fireworks mark the start of the race, as the jeeps ease one-by-one down the gentle slope and onto the first challenging track not far from the city.

Meanwhile, Natalya, a medical worker (and former employee of Russia's Ministry of Emergency Situations) and professional parachute jumper, decides I am far too underdressed to face the blizzard surrounding us (not to mention the subzero temperature) and wraps me in a parka from a previous Expedition.

She has accompanied all but two of the Expeditions as a doctor since they first started in 2005. I find the fact that she's never treated anyone for serious injuries in all those years (yes, I asked her) rather reassuring.

The teams are, however, obligated to assist any wayward, stranded or injured parties along the way regardless of delays – this is where she has been needed most, she explained.

An hour after our auspicious beginning, we were on the side of a cliff overlooking a small valley--this was the first challenging track for the teams to complete.

The jeeps lined up side-by-side to cross snow-covered terrain and snow mounds taller than the average driver (each jeep had its own individual track of land to drive over; the fifteen paths were separated from each other by orange markers).

The teams' strategies varied: some split up into groups of people with shovels and electric chainsaws hacking away at the higher mounds along the path; others made a mad dash at full speed until their jeep got stuck in a snow mound, after which they all got out and began digging the car out.

Still others maneuvered carefully around and laid out plastic mats to aid their jeep in passing through the more difficult parts of the terrain.

Around 10 teams successfully completed the track and made the last lurch over the giant snow mound at the end within the designated 90 minutes; the others were hauled out and missed out on the points.

In the middle of all this, one of the organizers told me I would be riding the next few days with a team called Trust, representing a Russian bank of the same name.

Trust bank gained national and even international fame by hiring Bruce Willis for its advertising campaign; the actor’s face looks down on Moscow from billboards across the city, along with accompanying catchphrases like, “Trust is just like me, but a bank.”

The bank never divulged how much it paid the “Die Hard” star, but Trust bank is clearly going all out for a tough-guy image. This year, the Trust team is back for the fourth time.

What’s today’s rumor? Many teams are not too happy about babysitting members of the press. The head judge of the entire event gave the journalists a stern lecture the previous night in Murmansk (during which many were already intoxicated) about proper etiquette while riding with a team.

Here’s the deal: We are not allowed to interfere in any way. That includes offering advice we are not asked for; turning on our music collection for the entire car to hear; taking excessively long bathroom breaks; ignoring instructions; or any number of other things that previously infuriated participants and at least in one case reportedly left a disgruntled reporter stranded in 40 below zero weather in the middle of Siberia.

I was therefore relieved when, upon presenting myself to my new banker buddies (this is a team-building trip for them), they welcomed me into the car with open arms and hearty sandwiches.

I was equally happy to learn one of the team members came in second place in a national competition for off-road driving thanks to his cool head and aversion to unnecessary risks. This is not a reckless bunch; I am in good hands.

I know that apart from making this drive and presumably promoting Russian Orthodoxy as a way of life, one of our fellow teams from the Church (the group of priests) has an additional mission – they are carrying icons that they will exhibit for all interested believers along our route.

Today I found out the Trust team also has an important mission – they had picked up a flag that had flown over a Soviet submarine during WWII in the Arctic Ocean from the Deputy Commander of Russia's Northern Fleet (based in Murmansk) and were driving it across Russia to present it to the director of a museum in Vladivostok where the submarine, called S-56, is on display.

I have to digress to a brief personal story here: about a year ago I had the opportunity to travel to Vladivostok for the first time. Completely by chance, I had my picture taken in front of a submarine on display outside a local museum and that picture was posted online alongside my report.

My brother, who lives in California, wrote me several days later to say it was the very submarine our grandfather served on during World War II (earning around 20 medals for heroism).

Today I found out the team I'm currently accompanying is carrying the flag of that submarine back to the museum in Vladivostok. Something apparently keeps bringing me back to this story. More, no doubt, in Vladivostok!

After completing the special track outside Murmansk, we headed south for a small village in Karelia, which borders Finland. We passed frozen lakes and endless forests. At one point we unexpectedly stopped to get our pictures taken in front of a sign marking the Arctic Circle.

As we drove, the radio would sometimes pick up conversations of passing truck drivers. It appears our labeled convoy of jeeps attracted a lot of interest. We'd hear comments like “These crazies are driving from Murmansk to Vladivostok!

We do this because we have to, for money, and these guys have nothing better to spend their time on!” Occasionally, a driver would figure out we could hear him and would send us good wishes for the journey.

I learned today that we will be driving practically nonstop (one guy sleeps on the back seat while the other drives) and I'll be lucky to shower before we reach Lake Baikal in Siberia. In fact, it could be another two weeks before I shower. The full extent of what I've gotten myself into has begun to sink in…