Expedition Trophy: Off the road again to cross Karelia 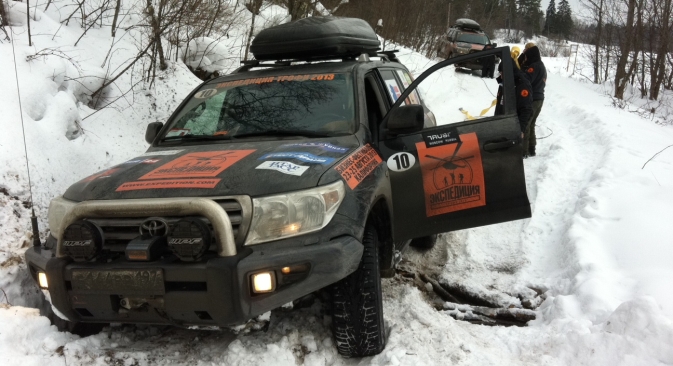 Any romantic vision I had about this off-road adventure is being debunked. It’s going to be rough and tumble, all right. It’s also going to be dirty and downright chaotic.

Late last night I began obsessing about how one crosses 10,000 miles in two weeks, and what level of personal hygiene and self-maintenance I could aspire to during this time.  So I engaged in the following dialogue with Nikolai and Ivan, the two Trust Bank employees with whom I've had the pleasure of sharing a Toyota Land Cruiser:

Artem Zagorodnov: “You really travel 10,000 miles during these two weeks?”

Trust: “Probably more than that.”

Trust: “Yep – one guy sleeps in the back, the other one drives.”

A.Z.: “Can I ask another silly question...can I expect to shower at all over the next two weeks?”

Trust: “If you're lucky you'll get a slot at this sports complex where we'll be for a few hours in Yekaterinburg (probably a week away)...there's also rolling around in the snow naked until it melts on you. That's kind of a shower.”

A.Z.: “I could also buy a bottle of vodka and rub down my pores, military style.”

Trust: “Now you're getting the idea!”

Any romantic vision I had about this off-road adventure is being debunked. It’s going to be rough and tumble, all right. It’s also going to be dirty and downright chaotic.

If Murmansk to Vladivostok sounds like a long distance, keep in mind we don't just drive along the main roads in between - as I learned today. We zigzag, backtrack, chart unknown territories and end up on random islands in the middle of Karelia – all for the chance to earn some extra points.

We started the morning by nearly deciding to drive 200 miles back North toward Murmansk to hit an Expedition destination on the map (the organizers track all cars by GPS and assign the points for those who make it to the designated locations). In case the organizers miss something, all teams are encouraged to get their picture taken at each location they hit that is worth points in order to prove that they were there.

A side note: Our targets are divided into moving locations (you have to reach it within a certain time window) and stationary locations (places we can hit anytime as long as we complete that part of the course within a set time.)

We spent almost the entire day crossing the Republic of Karelia, a Russian region with close links to neighboring Finland. When Lenin granted Finland independence following the dissolution of the Russian Empire, some Finns claimed Karelia. Lenin didn't agree. Tensions flared up immediately before World War II when the Soviet Union annexed some territory from Finland in a brief but costly war.

Interestingly, Karelia has also been compared to Minnesota in that it is Russia's “land of lakes,” containing well over 10,000 of them. The region is a favorite among hunters, fishermen and even weekend nature lovers; it is accessible by overnight train from Moscow and is a much shorter trip from St. Petersburg.

We made two important discoveries today:

1. Roads in Karelia are poor.

2. Our car doesn't function well on poor roads, which could make the immediate future quite challenging indeed.

While chasing a target far off the main road we ended up meandering along a narrow path though the forest and were surrounded by frozen lakes on all sides. Suddenly, Nikolai lost control of the vehicle as it slid no more than two feet to the side into a snow mound.

We were stuck...we had to set up ropes and have the other Land Cruiser pull us out. We spent the next two hours driving down this narrow path, veering off every five minutes and spending another half hour pulling the car out. This involved the hi-tech approach of attaching a rope to a nearby tree and using a special device to pull the car out.

Finally, we realized we were not going to reach the target destination. We had to turn around and head back to the main highway, having lost half a day. We're now driving toward Novgorod, the final destination of the first part of the trip, bypassing St. Petersburg.