Learning to love the Kazakh steppe 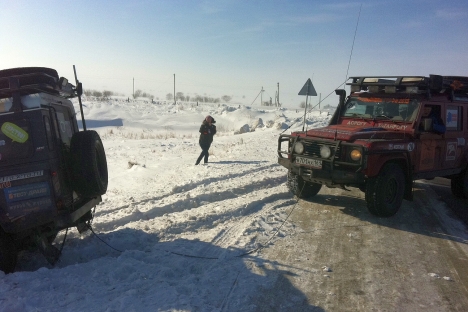 The off-road expedition is going on. Source: Artem Zagorodnov

The Kazakhs, I discovered, do not take our newly formed Customs Union as much of an excuse to be lax about border crossings; nor do they much care for the Russian ruble. But a snowstorm on the steppe led to a cozy night indoors.

It's been an intense day, but a very rewarding one. Well, rewarding for the wrong reasons – let's start at the beginning.

Since my last blog post, Alexei and Evgeny took turns completing a heroic drive across the Ural Mountains while I dozed peacefully in the back seat. I treated myself to a few shots of vodka and one of my favorite films, “About Schmidt,” with Jack Nicholson and Kathy Bates on my Netbook before dozing off as we sped through the darkness outside.

My travel companions seemed to find my Russian-American way of dealing with boredom and trying to feel at home somewhat amusing.

On the chiropractic front, my knees have finally stopped hurting from being in this cramped position almost 24 hours a day (I'm fortunate not to have any back pain, which many others have reported), and I've learned to sleep and even dream in the back seat of a car almost as if I was in a bed.

I awoke just before we crossed the border into Kazakhstan not far from the Russian city of Chelyabinsk, over which the passing meteor recently exploded. (I did not get to stop and collect small pebbles of meteor to sell later in Moscow, sadly.) Passing through the Russian side of the border was surprisingly efficient and straightforward.

In fact, my only encounter with law enforcement so far on this trip was when a highway patrol car pulled us over yesterday; the policeman said we hadn't broken any laws, but that he and his colleagues were curious what kind of expedition we were on. Finally, they wished us the best.

However the Kazakhs, I discovered, do not take our newly formed Customs Union and Eurasian Economic Space as an excuse to be lax on border crossings – we had our passports and belongings thoroughly examined, had to provide details of how long we would be in the country, why and where we were going, and then buy insurance for our vehicles. Half an hour later we were mysteriously pulled over and asked to “register” for a fee (we never did find out what we paid for exactly).

I’d like to make a big apology to the Russian gas stations I wrote about earlier – Kazakh stations generally do not seem to accept electronic payment of any kind, and when you ask about paying with Visa they look as if you're from another planet! They have no hot food or other conveniences available though I will admit they do sell a wide variety of alcohol.

The “bathrooms” are nearby outhouses with a hole in the ground. Worse still – they don't accept Russian rubles. We tried three gas stations until a friendly customer agreed to exchange our money for the local currency so we could fill up (the tank was near empty).

We were so frazzled by our hassled entry that we didn’t notice right away that a Kazakh-style Snowmageddon, or at least a white equivalent of Hurricane Katrina, had just descended, like an epic blanket, on the Kazakh steppe. At one of the gas stations, I made the mistake of stepping on a (slippery) marble panel and found myself literally blown away against my will. At times I could not get a grip in the gale-force winds.

Yet we were still under great pressure to find these space objects, and my team pressed ahead as fast as they could. At some point visibility on the highway was so bad we could not see the road in front of us. Yet they still insisted on passing trucks and cars that were going too slow, which meant passing in the lane for oncoming traffic. This was probably one of the scariest things I've experienced in my lifetime.

Evgeny, sitting next to me in the back, said understatedly, “We'd better buckle up.” Soon after that the storm temporarily cleared and the driver of our car made a left turn a little too fast. He lost control of the vehicle on the ice and veered from side to side until finally plunging into the ditch by the side of the road. We were going slowly enough that nothing was damaged.

Luckily, the car stopped upright. Our fellow team members came back and pulled us out.

After that we all wore seat belts. We also all began to smoke, even the non-smokers. The driver announced that the incident woke him up and he would be “more careful from now on.”

I often like to reassure people with a fear of flying that their drive to the airport is statistically a hundred times more dangerous then their actual flight regardless of where they're going; therefore, by the time they take off they have nothing to worry about. This incident reminded me once again of how dangerous the entire undertaking is.

We continued ahead even as darkness set in. The team hadn't had a warm meal since early yesterday, and my requests for food were met with a Snickers bar being stuffed in my mouth.

Sometime after twilight the team learned that the space objects were being picked up by rivals and that they would most likely fail on this assignment. Their secret strategy – which I will share with you as soon as I am allowed – has most likely failed.

We were suddenly stopped in the snowy darkness by an armed police officer; he said that the road further down was closed due to weather conditions. Hunting for this space object would have to be put off until tomorrow. While the others were distressed by this setback, I was selfishly ecstatic. A warm shower! My own bed! Internet? Movies? Maybe I will even change my clothes…

I was happy as a child and, the others immediately noticed, extremely eager and concentrated on making sure we found hotel rooms for the night. I dashed to the first possible accommodation we came across and learned they had no vacancies. I then wrote down the name and addresses of all nearby hotels.

Upon learning the one we chose didn't take credit cards or Russian rubles (shocking), I led the trip to the local train station where the only ATM in the town was located. When it came to leading the charge for rest and relaxation, I was suddenly incredibly stoked and useful.

We finally enjoyed a warm meal and drinks before retiring to our rooms. Time to enjoy this little piece of heaven now. And the best part – I can sleep in because the roads won't open before eleven tomorrow...I am beginning to love the Kazakh steppe.