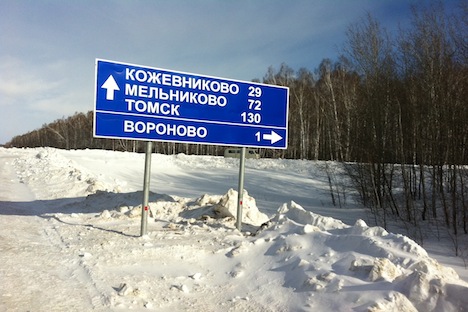 It was morning when we entered Expedition founder Alexander Kravtsov’s emerald city. After a grueling night, driving through a storm that refused to abate, we pulled into Ruyan.

“Are you fed up with going to the office every day? Are 20 vacation days per year not enough for you? Do you want to make good money and live as you like?”

Expedition Founder Alexander Kravtsov’s website asked these burning questions. The creator of the “Expedition” brand is becoming known as the Russian Sherpa for entrepeneurs. And soon, I am going to meet him.

If Prime Minister (then president) Dmitry Medvedev's answer to Russia's oil dependency and poor business climate is Skolkovo, the Silicon-Valley-to-be outside Moscow, Kravtsov's answer is Ruyan-city, a community of like-minded entrepreneurs and young enthusiasts living in harmony with nature and adhering to a code of rules in the middle of Siberia.

It was morning when we entered Kravtsov’s emerald city. After a grueling night, driving through a storm that refused to abate, we pulled into Ruyan in the Tomsk region around 10 a.m. after cruising by major Siberian metropolises like Omsk and Novosibirsk.

The weather had cleared and we were greeted by a crisp but distinctly calm and frozen Siberian sunny winter day, birch trees surrounding us on nearly all sides.

Ruyan was founded in 2010 on a cliff overlooking Siberia's major Ob River and offers a stunning view of the valley below, with the forest continuing endlessly into the horizon.

Today the community consists of little more than a large two-story wooden lodge (which houses a canteen, kitchen, auditorium, sleeping quarters and storage), several banyas, outhouses and yurts serving as common bedrooms, a trampoline, swing and a monument to Yuri Gagarin in the center (identical to one that was unveiled in Houston, Texas last year).

A large blue sign greets residents and guests alike at the entrance: Entrepreneurs of the World Unite!

Kravstov envisioned the city as an embodiment of his values. His idea was to set up a place where like-minded individuals could exchange knowledge, business experience and, most importantly, funding for successful entrepreneurial ventures not unlike Expedition itself.

It was deliberately set up close to nature and far from bureaucracy and corruption. Kravtsov sees it becoming a top global destination for entrepreneurs (so much for the Russian government's plan to make Moscow a world financial center).

Residents are discouraged from engaging in romantic relationships with each other; consuming hard alcohol; and swearing in the presence of women. It's all part of a code of laws and ethics available on the city's website and espoused in Kravtsov's book, “Life as an Expedition.”

The book has been translated into English. (I plan to interview Kravtsov later in the trip, so stay tuned.)

Upon our arrival, locals were more than eager to serve us food in the canteen and help us find our way around. I was told to hurry up and take advantage of one of the banyas before they filled up but, alas, I was too late and will have to remained un-showered until the next opportunity arises.

Hot food, however, was more than enough of a reward; in addition to sandwiches and roasted meat, we were treated to chicken noodle soup and shurpa (a sort of local goulash).

This also provided ample time to swap stories with fellow journalists. Tolya, my new buddy from the online news service Gazeta.ru (whom I'd met departing on the flight to Murmansk), was more than happy he'd chosen the faster route here.

He'd enjoyed a European-level hotel in Yekaterinburg and the opportunity to explore the city with an old friend. My stories from Kazakhstan, however, beat any of the other journalists had to share.

I found out the new group I would be travelling with is Cosmos (“space” in Russian), the winners of the first two legs of our competition (they had managed to pick up two of the five space capsules on the Kazakh steppe and are now the heavy favorites to win the competition).

After the planned “special track” (remember the last one was boycotted by everyone but the priests), or mad dash through the snow, we sped off to Lake Baikal. I spent the dash trying to keep myself warm in the subzero cold, wind and darkness.

I soon realized why these guys were ahead: They wasted no time on formalities, were the first ones on the road after the special track, had their navigating done well in advance and drove and slept according to a strict schedule.

The only thing I got out of them is that at least one of them works at a defense-sector-related engineering company, which I guess explains the military approach.