Understanding the spirit of Expedition and the gifts of boredom 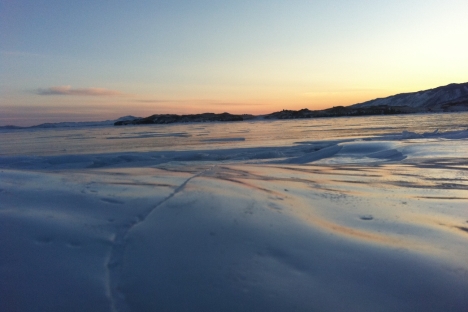 On the way to Lake Baikal with the first-place team, Artem Zagorodnov discovers some kind of inner peace.

During our long and frenzied dash from Ruyan-city to Lake Baikal, we ran into some car trouble and had to make a two-hour pit stop at a gas station near the border between the Krasnoyarsk Krai (Russia's largest region by area after three regions were incorporated in a referendum in 2004; capital of the same name) and the Irkutsk region (which borders Lake Baikal).

As some team members were removing wheels from one of the jeeps and diving underneath in the usual freezing cold, I had a chance to enjoy a hot dinner of borsch and pelmeni (meat dumplings) with team captain Sergei.

It's hard to imagine anyone undertaking such an adventure, including all of the financial costs, without asking the obvious question: Why? Why do the organizers send participants on a mad dash all the way across the country year after year, spending more than a million dollars and incurring all the risk?

What's the point of not sleeping comfortably or showering for two weeks, effectively missing most of the sites along the way due to exhaustion and a lack of time? The captain of the team taking first place in nearly every competition to date seemed a good person to ask.

Sergei's quest is personal: Three years ago he participated and the team didn't win. He took the loss to heart. “We didn't really have an idea of what we were doing; from the start, we put together the wrong people for the team, the wrong equipment and didn't really have a strategy. By the time we figured this out, it was too late. This year's about saving face and showing the organizers what we're capable of.”

Looking at the competition overall, Sergei admitted it's a strange hybrid.

“It's not really tourism, and it's not really sport – kind of like the Expedition brand itself. It's too extreme for tourism, and too complicated for sport. Sports have clear-set, quantitative criteria for winning. Here they deliberately make the rules vague, make some up along the way and have this strange point and voting system--at the end teams will vote to assign additional points. I care only about winning the objective parts of the competition; I want to be the fastest and best at navigating each section.”

“They try to attract top-notch athletes each year to build up the brand. If they just made it a simple drive across the country, they'd have a lot more participants…but wouldn't be able to attract top-motor racing people,” Sergei explained.

Expedition founder Vladimir Kravtsov shared his own explanation at the company's press conference in Ruyan-city the day before: “If the Chinese have a plan for incorporating Taiwan, and then incorporating Russia's Far East and Siberia, we should have a plan for keeping our country together. This is our attempt.” Kravstov, as always, has his sights set on goals higher than simple public relations.

I realized over dinner that despite Sergei's hard-core approach, Cosmos was the only team I travelled with so far that brought homemade food. We enjoyed hot soup from a thermos while dashing across Siberia's icy roads in a car. Each meal began with thorough hand washing. The team approached the competition in a very cultured and organized way.

As the team finished its repairs, we finished our meal and took off into the darkness. I noticed a nearby building with a neon “motel” sign on top. I had been noticing these throughout our trip and apparently they have appeared in the last five years or so.

Finally, there is a Russian take on cheap standardized roadside lodgings meeting basic hygiene and comfort. I'm dying to try one of them to compare to American motels. “We can leave you here if you like,” team member Dima quipped. I declined the offer – Lake Baikal was less than a day away.

Racing through blinding blizzards, slipping off the road and pulling other cars back on the road have become daily occurrences. For this reporter, a major psychological factor to deal with on this trip is simple boredom. I'm not able to read in the car and the batteries on my electronic devices die fairly quickly.

The teams I've been with haven't been eager to transfer too many driving or navigating duties to me. Once I've filed my blogs and taken my pictures, there's a whole lot of time with absolutely nothing to do. Even staring out the window becomes extremely repetitive.

I realized this is completely different from the other road trips I've been on. In most of my travels, I feel I am more or less in control of my own destiny. I usually have short-term rewards I can look forward to: a hot meal; a stop at a motel in the evening; a place I am travelling to see.

On this trip, hoping for a closed road is both naïve and selfish. Yet as an observer, there’s nothing to do but sit in the car for days on end. The everlasting boredom sort of engulfs you; yet the strange thing is that it makes it more bearable. Ironically, when I'm set on being in this state for the near future I find myself a lot less tense and impatient than on other, easier trips.

This trip is an affirmation of a speech once given at a Dartmouth College graduation by the late poet Joseph Brodsky (“On Boredom”) where he argued that colleges fail to prepare students for the most important thing they're likely to encounter the rest of their lives – boredom. He argued there were two ways to deal with it: either fight it with intrigues, or simply embrace it.