Getting reflective at the end of the line 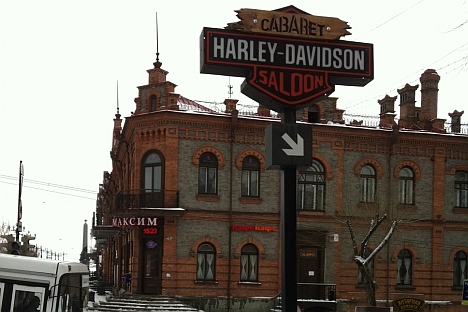 Despite a lack of McDonalds, Khabarovsk is still full of American influence. Source: Artem Zagorodnov

While the Expedition Trophy race came an end, RBTH's Artem Zagorodnov reflects on Khabarovsk, the most European city in Russia's Fast East.

Despite a lack of McDonalds, Khabarovsk is still full of American influence. Source: Artem Zagorodnov

Vladivostok's train station has a monument commemorating completion of the world's largest railway; it indicates that Moscow lies 9288 kilometers (5771 miles) down the line. This was where I entered the city (after having traveled considerably more than that) thanks to the organizers putting me on a train at our last stop, Khabarovsk, because of several teams dropping out of the race.

We made Khabarovsk yesterday afternoon with the “Our Alaska” team and I'd had several hours for relaxation. When I reported from this area a year ago I'd learned that despite an overall demographic decline across Russia's Far East. The area has lost over 14 percent of its people in the last 15 years due mostly to emigration to Russia's European territories. Now, with a total of 6.7 million people, it is one of the most sparsely populated territories in the world.

Yet Khabarovsk has been the only place in the region that has seen a population increase. Most locals name one man as the reason: Victor Ishaev, Khabarovsk governor for almost a decade and now head of Putin's newly created Ministry for Far Eastern Development (yes, there's now an entire ministry trying to get people to stop leaving here).

The city consistently ranks as having one of the best business environments in Russia in various polls and this is illustrated by the cafes and shopping malls that dot its city center. You can see skyscrapers under construction at several locations (our boutique hotel occupied the first three floors of one called Khabarovsk City) and women carefully watering flowers hanging at the tops of lampposts from a special elevated machine.

Khabarovsk is by far the most European city I've seen in Russia's Fast East.

Fast food chains haven't made it out here yet—not even McDonald’s--but a thirst for all things fat and salty combined with entrepreneurial audacity has made for a thriving local knock-off business of fast food joints with names like Good Burger and McChicken’s.

Fast food was one of the things I was craving most after days of hunger mixed with roadside stops (the standard has been olivier salad, borsch and pelmeni for the past week), so I got my fix at Golden Bird, a complete KFC knock off (fused with a McDonald’s-like play place for kids).

By evening it was time to board the overnight train to our final destination: Vladivostok, Russia's largest Pacific port. I regretted that I wasn’t able to complete the full journey by car, but also happy for the opportunity to report from this special train wagon that the organizers had been traveling in and had the teams chasing like mad men (in a previous blog I described Our Alaska catching a “mobile target,” which meant running up to the Expedition wagon and getting a stamp from the organizers within the two-minute period the train stood at the platform).

And I think I've gotten the idea of driving across Russia by now, anyways.

So the wagon is branded in Expedition's orange colors and festooned with banners and flags hanging in all the windows; the wagon is attached to various trains at the cities along the journey. It features all of the comforts most of the teams deny themselves: showers, clean bathrooms, beds and a cafe/restaurant.

That evening the organizers celebrated the approaching end of the journey and a colleague's birthday with singing and live guitar music. Each organizer was offered the opportunity to demonstrate his or her singing ability; some took advantage of the offer.

I'm now at the Primorye hotel in downtown Vladivostok awaiting the evening's end-of-the-road party. The remaining teams have already completed the symbolic drive to the lighthouse on the Pacific Ocean where the journey ends, a reference to the Arctic lighthouse where we'd started two weeks ago. But journalists were not invited to this event.

Meanwhile, I'm getting back into the habit of showering and brushing my teeth daily. I'll be spending the remaining days in the comforts of civilization, which will take some adjustment. But not too much!