Reflecting on a madcap journey to a fear eastern outpost 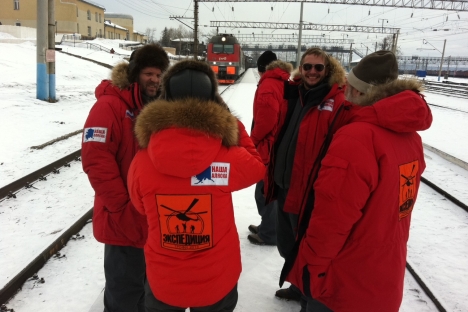 Our Alaska team that participated in the 2013 Expedition Trophy. Source: Artem Zagorodnov

I can’t believe this is my final Expedition blog. As eccentric and at times bizarre the past two weeks have been—not to mention claustrophobic—I already miss the intense sense of purpose I felt with each team I traveled with. Even when we were clearly on the roads to nowhere! A big thank you to all my host teams.

I wasn’t in it for the competition. The journey itself was the purpose and the final destination for me. This was also true for many of the bankers, CEOs, consultants and other professionals. They take a break from their hectic routines every year to undertake this madcap and at times dangerous game. They test themselves and their spirit of camaraderie outside the confines of an office.

The night I filed my penultimate blog I was invited to join a panel tasked with judging the videos submitted by all of this year's participants.

They were shown on the final evening at the Hyundai Hotel in downtown Vladivostok. The video was a requirement for completion of the trip; most teams had assigned the video journal to one member who would frantically work on it in the passengers' seat of their car during the last leg of the journey; all but one of the finishing teams in Vladivostok submitted one.

The winning video featured a rather crude scene of the team members urinating the car outline into the snow at a pit stop. This low-end humor nonetheless managed to bring the audience to its knees. Maybe after two weeks on the road it was something most of us could relate to in some way.

The video contest was followed by a celebratory banquet that carried the distinct air that any and all disagreements, antipathies or misunderstandings between organizers and participants were officially in the past. The Expedition was a wrap, and we were all happy to be here regardless of the winner.

The following morning, the remaining teams lined up to compete in the last “special track” – a mad dash up a rather steep incline. As predicted, Cosmos – who was determined to win from the start and, as a result, attracted a mixture of envy and admiration from the others teams – took the Grand Prize.

I was left with almost an entire day off and could finally enjoy the modern conveniences I had been missing for two weeks. I had plenty of time to contemplate the trip. Did I get to see the country, as I had hoped? Not really, unless snowstorms count as scenery.

The intense driving schedule meant that we passed through most cities and other areas of interest either in the pitch darkness of night (or a blizzard!) or while I was asleep or too tired to care. The only two cities I had gotten any chance to explore came at the beginning and end of the journey, Murmansk and Vladivostok.

Am I happy I went? Absolutely. The organizers' enthusiasm for extreme sports and conquering the far corners of this giant country fused into some kind of uniquely Russian patriotism I grew to admire. I also admire the blind optimism required to guide over a dozen competing teams through some of the world's longest and more treacherous roads and their seemingly endless luck in avoiding the worst possible outcomes of such a journey every year!