Chavez and the art of diplomatic ambush 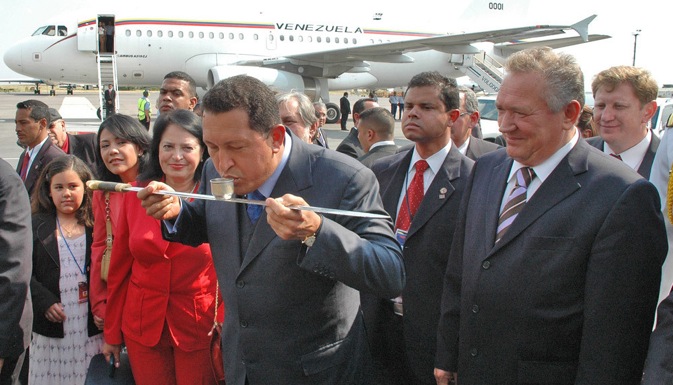 It is Chavez’s charisma and impact on the world that has made him so popular and endearing. Source: ITAR-TASS

By punching way above his weight, the late Venezuelan leader showed that countries like Russia and India, with vastly more influence, can do a lot more in shaping the world around us.

Hugo Chavez had balls. When you see national leaders crawling when asked to bend by the United States, just stop to think for a minute that for over 14 years the late Venezuelan president kept a gnarling superpower at bay.

Chavez’s most enduring legacy is that he single-handedly punctured American influence in Latin America. His brazen defiance of Washington – which conducted an unsuccessful coup d’état under George W. Bush against him – should serve as a lesson in “How to Bring Down a Superpower” to future challengers like India, Russia and especially Brazil, which has strongly demanded that the Western powers start vacating the global high table.

Venezuela sits on top of the world’s biggest oil reserves – bigger than Saudi Arabia and Russia’s. Chavez leveraged this high-octane power to achieve the unthinkable: he helped Latin America break free off the shackles of the Monroe Doctrine.

This is how he did it. In 2005 Venezuela set up Petrocaribe, an oil alliance which allows its 16 Caribbean members to buy Venezuelan oil at 1 percent finance repayable over 25 years. The alliance kept these underdeveloped economies – including fiercely independent Bolivia, Nicaragua and Cuba – from sinking during the recession.

It is remarkable that the Russians of the post-Glasnost, pre-Putin era never thought they could use their vast oil resources to checkmate America in Europe. Russia could have set up a European oil exchange and offered low-interest oil deals to the poorest European countries. There’s a good chance some of the wealthy ones would have jumped on board too. It is something Putin and his crew should chew on.

Chavez and Russia: history in photos

Depending on which side of the geopolitical divide you are, Chavez was either a failed 21st century Robinhood or the saviour of socialism. He was neither. His mostly Western detractors are right on several counts – the Venezuelan economy is not in the pink of health, violent crime is on the rise, and state enterprises are notoriously inefficient. Of course, these don’t happen in any other country.

But just check out this graph that can be generated at the World Bank’s data centre. According to the American bank, poverty in Venezuela plummeted from over 62 percent of the population in 2003 to 31.9 percent in 2011. More impressive is the drop in the “extreme poverty” rate from 23.4 percent in 1999 to 8.5 percent in just ten years. This leaves Venezuela with the third lowest poverty rate in Latin America. Not bad when you consider that over 50 million Americans suffer from chronic hunger.

Chavez offers a lesson in economics to a country that is ironically led by an economist. India is hurtling towards great power status, it is launching interplanetary probes and spending gazillions on advanced weaponry, and yet sadly it is leaving millions stuck in the Third World. Barring a tiny number of government pensioners, most Indians still lack social security and millions are just one major illness away from sliding into poverty.

Like Venezuela, India too has plenty of money but here’s what Caracas did with its cash. “Since the Chavez government got control over the national oil industry, poverty has been cut by half, and extreme poverty by 70 percent,” says the New York Times. “College enrollment has more than doubled, millions of people have access to health care for the first time and the number of people eligible for public pensions has quadrupled.”

What Chavez did was he transferred his oil bounty directly to the poor. The middle class chafed and the tiny 1 percent packed up its bags and left (perhaps taking their billions with them) but Chavez allowed the poor to enter the middle class. It doesn’t take a degree in economics to understand that Venezuelans are higher up on the developmental totem pole than Indians.

Like a double-edged sword, democracy can be tricky. India’s fractured verdicts, its multiplicity of parties, and states vs. Centre issues have ensured that quick decisions are impossible even in pressing matters. While everyone praises India for its democratic traditions, in reality India has become a non-functioning democracy where nobody has a mandate to do nothing.

In contrast, Chavez installed what is probably the most tamper-proof voting system in the Americas. It was most likely to prevent the United States from rigging elections in Venezuela. (Don’t forget the rigged Al Gore vs George W. Bush presidential race.)

Why ‘Yanqui’ hands are tied

Venezuela is almost entirely an oil-based economy. If that isn’t bad enough, its biggest customer is also its No.1 bugbear – the United States. And yet every time Washington and Caracas had a diplomatic firefight it was always Chavez who threatened to turn off the oil spigot to the United States.

Venezuela had a lot to lose if he had acted upon his threats. Out of the total quantity of oil the country exports, the United States buys 60 per cent – that’s about 1.5 million barrels of crude oil every day. But Chavez knew Americans were addicted to Venezuelan oil. Also, Venezuela’s largest oil company wholly owns five refineries in the United States and partly owns four more. The Americans admit their vulnerability. According to the United States Government Accountability Office, a sudden loss of Venezuelan oil in the world market would raise world oil prices and slow the economic growth of the United States.

The point is the West is mercenary by nature. They follow the money. They will never do anything that impacts their profits. As long as Russia has oil, India has markets and China has factories, the West won’t do anything to upset these powers.

Russia to continue arms deals with Venezuela after Chavez's death

Venezuela may be small but it punches way above its weight diplomatically. Not only has it improved the living standards millions of its own people, the country, believe it or not, provides subsidised heating oil to poor Americans.

Conceived in 2005, in the wake of hurricanes Katrina and Rita, the CITGO-Venezuela Heating Oil Program has helped more than 1.7 million poor Americans stay warm during the coldest months of winter by donating more than $400 million of heating oil.

Emerging economies, especially large countries, can borrow a leaf or two from Chavez’s book. India, for instance, may not have oil but it can offer its vast expertise in IT, space technology and high-tech manufacturing at low cost to win friends and influence nations.

In 2009, Iranian leader Mahmoud Ahmadinejad took Chavez to the Iranian holy city of Mashhad where he took him inside the shrine of Imam Reza, which is off-limits to non-Muslims. Last week, in a condolence letter to Venezuela, Ahmadinejad wrote that Chavez would be resurrected with Jesus Christ and Imam Mahdi – Shiite Islam's prophesied redeemer – to save humanity and bring justice to the world.

Islamic scholars condemned Ahmadinejad’s acts and words and accused him of blasphemy. Not that the Iranian leader cared.

It is Chavez’s charisma and impact on the world that has made him so popular, and perhaps endearing. Not bad for a man who was born in a working class neighbourhood.