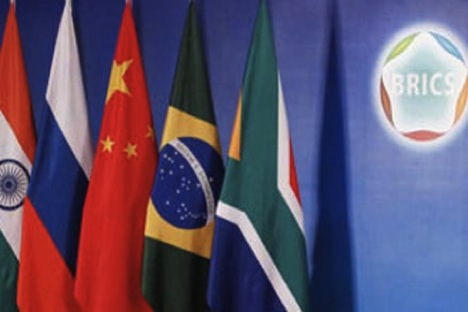 The BRICS’ splashy ‘arrival’ in the African continent is bound to arouse disquiet in the western capitals. Source: ITAR-TASS

The BRICS’ splashy ‘arrival’ in the African continent is bound to arouse disquiet in the western capitals.

South Africa is taking very seriously its onerous responsibility to host the BRICS summit meeting in Durban on March 26-27. The invitation extended to the African Union [AU] and African economies to the BRICS summit sets a new chapter in the grouping’s 5-year long chronicle.

The decision to spread wings is a trendsetter, no doubt. Why it didn’t occur to India to invite SAARC to last year’s summit in New Delhi, I do not know, but it would have been good to do that.

South Africa’s invitation to Egyptian President Mohamed Morsi to attend the Durban summit is even more important. The big question is whether Egypt would have a permanent berth in the BRICS tent. But then, how long can Egypt be kept out if Morsi makes a pitch for it? Egypt is a pivotal state.

Undeterred by the fact that it takes many summers to put together a BRICS development bank, South Africa remains optimistic that the Durban summit will take a firm decision. It has begun pitching for basing the proposed bank in South Africa. Conceivably, China would favour the idea, as a Xinhua report might suggest.

How many of the BRICS member countries have thought of establishing an exclusive BRICS ‘think tank’? Well, again, South Africa has. The South African government has entrusted the Human Sciences Research Council with the task of functioning as ‘incubator’ for a South Africa BRICS think tank.

Of course, South Africa’s defence cooperation with Brazil and Russia has gained appreciable ground. South Africa can expect full-throttle support from Moscow for revving up the BRICS process.

An expert study released in Moscow over the weekend has made some far reaching recommendations such as setting up a permanent BRICS secretariat, offer to host the BRICS development bank, creations of a $240 billion ‘anti-crisis fund’, strengthening of joint work in the security area and so on. The report was commissioned by the Russian government with a view to counter the tendencies in the West to view the BRICS as a ‘rival’.

Africa is becoming a playground of big power rivalries. The BRICS’ splashy ‘arrival’ in the African continent is bound to arouse disquiet in the western capitals. In South Africa itself there is a strong lobby that seeks to debunk the BRICS process.

The fact that China is looming large as an economic presence in Africa and is offering an alternative partnership of development to the regional states upsets the West, which has been dominating the continent as its exclusive preserve for sourcing raw materials and as market for exports. The visits to various African countries by China’s new leader and incoming president Xi Jinping in his first official tour abroad will surely raise hackles in the West, especially in the United States.

All in all, therefore, South Africa will run into air pockets in the coming period, but for the present the weather looks fine and the BRICS jet is coasting happily toward the Durban summit for a good landing.