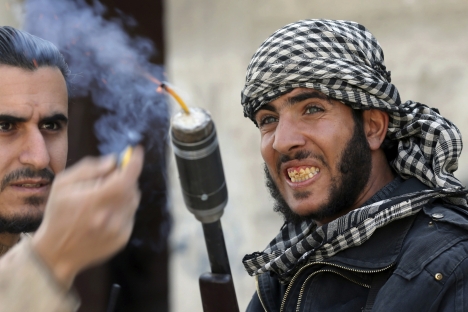 If the barricades in Damascus get overrun, the battle against Islamist radicalism is lost in the region. Source: Reuters

With the BRICS summit coming up, New Delhi cannot afford to fail in defining its self-interests when the flame of Islamist militancy lurches across the so-called Greater Middle East.

The Syrian special envoy Bouthaina Shaaban who visited New Delhi last week to make the demarche that India should raise its voice and help the BRICS summit meeting in Durban (March 26-27) make a “very strong decision” aimed at helping end the violence in her country that has killed 70000 people. But, alas, Prime Minister Manmohan Singh couldn’t receive her.

In particular, Shaaban harped on the multi-ethnic and plural character of the Syrian society, its adherence to secular values and its abhorrence of radical Islamism (“Wahhabi fundamentalist terrorists”) and the blatant external intervention and most tragically, the injection of the sectarian Shia-Sunni virus to fragment the Syrian nation, similar to what was done to Iraq through the past decade. Woven into the narrative is the great game over the massive energy reserves of the Levant Basin, which the West aims to control.

India chose to meander through the past couple of years – at one point even identifying itself as one of the “Friends of Syria” forum that unabashedly proclaimed its objective of regime change. The trapeze acts by Indian diplomats have been so cheeky that one gasped for breath. Sadly enough, going by the South Block’s anodyne statement last week regarding Shaaban’s visit, revisionism permeates the current Indian stance. It is appalling that the MEA statement did not even care to mention the root cause of the bloodbath in Syria, namely, external intervention and the push for regime change. Why is it that India’s voice on Syria hardly audible and it cannot even forcefully condemn the external intervention in Syria with the specific purpose of imposing a regime change?

The two Arab regional states spearheading the assault on Syria’s sovereignty – Qatar and Saudi Arabia – cynically insist that they are promoting democracy and human rights! They are in actuality using Salafist fighters and the affiliates of al-Qaeda as instruments of policy with sectarian motives aimed at curbing the exuberance of the growing Shi’ite empowerment in the region. This is not dissimilar to what Saudi Arabia did in the 1990s by injecting Wahhabist ideology into Afghanistan (which was rooted in moderate Sufi Islam), which ultimately manifested as the grotesque Taliban movement. Of course, the Saudis lost nothing in that ghastly enterprise and, in fact, are today, along with Qatar, happily back in the game by re-integrating the Taliban into the Afghan power structure. The Saudi and Qatari motivations in Afghanistan and Syria bear striking similarity.

The Saudi-Qatari regional agenda is antithetical to India’s core interests and vital concerns. But India seems to have lost the plot. Somehow the Saudis have come to cast their shadow on our so-called identity politics in regions such as Uttar Pradesh or Kerala, and our savvy politicians know very well what is good for them in this coalition era. Meanwhile, yarns have been spun conveniently to make it out to be that India and Saudi Arabia are strategic allies in the struggle against terrorism. In reality, though, Riyadh fights terrorists only on its soil who threaten the survival of the regime, while the same elements masquerading as radical Islamist forces readily become hand tools for Saudi regional policies in Afghanistan, Iraq or Syria.

Stopping the madness in the Middle East

UN role in Mali and Syria: A comparison

Syria and the revival of Al Qaeda

In the ultimate analysis, however, this goes beyond a question of the nexus between the Saudis and religious circles in India or the weakening moral fibre of the Indian politician and his compulsion to tap into identity politics. Simply put, it is a matter of principle that India should voice its disquiet over the blatant Saudi-Qatari intervention in Syria, which is destabilizing a staunchly secular country, and Syria also happens to be a friendly country that stood by India – ironically, even to the extent of helping our efforts to frustrate Saudi-driven charades in the Organization of Islamic Conference over our Kashmir problem.

India cannot afford to fail in defining its self-interests when the flame of Islamist militancy lurches across the so-called Greater Middle East. Syria has always been the “beating heart of the Arab world” and if the barricades in Damascus get overrun, the battle against Islamist radicalism is lost in the region.