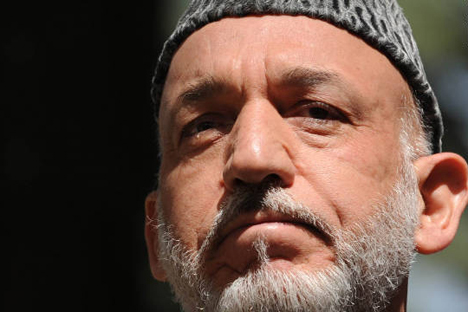 The ebb and flow of Kabul-Washington tensions had almost lost their novelty through the past 3-year period, but tensions have suddenly begun cascading.

The equations between Afghan President Hamid Karzai and the Americans never really worked out during the past three-year period since 2009 when the Afghan presidential election was held. The United States wanted a “regime change” in Kabul in 2009 and Karzai was not only not agreeable to be thrown under the bus but he also was determined that he would remain the head of state for another four-year term, which the Afghan constitution indeed allowed. Confidence once broken at that level – and on an existential issue – cannot easily be regained.

A “trust deficit” exists between Kabul and Washington. This is one charitable explanation that can be given to the “surge” in the rift in Karzai’s equations with the US lately. What makes things somewhat complicated today is that the key interlocutor who finally assuaged Karzai’s sensitivities in the winter of 2008 and worked out a deal resulting in his subsequent election “victory” also happens to be the new US Secretary of State John Kerry.

We do not know the exact terms of the deal but according to what Kerry disclosed during the US Senate hearings last month on his appointment to the cabinet post, Karzai seems to have held out a solemn assurance to Kerry that he wouldn’t seek a third term as president. Kerry, in his testimony, nonetheless went on to pledge that the US is determined to work toward Karzai’s replacement in Kabul and there is going to be no let-up in that effort. Now, we do not know why Kerry chose to make such a vehement pledge in the full glare of world attention, which was totally unnecessary, since Karzai has anyway repeatedly vowed whenever, wherever he has been asked on the issue that he doesn’t intend to contest in the forthcoming presidential election in 2014.

Equally, Kerry did not include Kabul in his first tour abroad recently as secretary of state, although Afghanistan is and will remain a major foreign policy issue for President Barack Obama’s second term.

The ebb and flow of Kabul-Washington tensions had almost lost their novelty through the past 3-year period, but tensions have suddenly begun cascading. A new season of Karzai-watching has begun among western observers, who try to fathom and interpret the manner in which his mind could be working and what his intentions could be in taking a series of harsh steps lately to make it clear to Washington where to get off and that he was the boss in the Hindu Kush.

Karzai failed to make an appearance at the formal ceremony in Kabul when the new American commander Gen. Joseph Dunford took over charge last month. Not only that, his first official “contact” with Dunford was to summon him a couple of days later to the presidential palace and give the decorated 4-star general a dressing down in full public view on the sensitive issue of the US forces causing civilian casualties. Since then, the US military has acted strangely.

Soldiers do not like being told off. Thus, Karzai ordered the US Special Forces out of Wardak province by March 10, but Dunford has (so far) failed to comply – even ten days later. Again, Karzai announced the formal takeover of the prison in Bagram air base and the hundreds of Afghan political detainees under American custody for years, while Dunford put in preconditions at the last minute, insisting that the US military reserves the right to decide whether the prisoners could be released.

No doubt, whether Dunford intended it or not, Karzai cut a sorry figure in the Afghan political bazaar. But Karzai won’t take the snub lying down. On the eve of the “familiarization tour” by the new US Defence Secretary Chuck Hagel to Kabul recently, Karzai insinuated that the Americans were in league with the Taliban to prolong the foreign military presence in Afghanistan. Hagel ducked Karzai’s missile but Dunford hit back at the Afghan leader by putting the US forces on heightened alert and warning in an advisory explicitly that Karzai’s “inflammatory remarks” jeopardised the safety and security of the American soldiers deployed in Afghanistan.

The rift inevitably spilled out into the streets this weekend with a big public demonstration in Kabul calling for the end to western occupation and the summary withdrawal of all American troops from Afghanistan. Even more significantly, the Afghan National Ulema Council, a government-funded body of religious scholars (who are on government payroll), which represents all of the country’s Islamic clerics, has come into the open with a vitriolic statement warning that the American “infidels” will be treated as invaders unless the Obama administration heeds Karzai’s demands on the US-run Bagram detention facility and the Special Forces in Wardak.

Make no mistake that these clerics who enjoy governmental patronage largely take the cue from Karzai’s politics. The stunning part, therefore, is the language they used. The usage of the term “infidels” [kafirs] to refer to the US and its allies underscores that Karzai’s relationship with the Americans has touched rock bottom. The clerics said: “Allah has never allowed Muslims to accept the sovereignty and rule of the infidels."

The statement added that Karzai’s demands (relating to Bagram, Wardak and so on) “are the voice of the Muslim Afghan nation” in the interests of the “sovereignty and independence of our country”. It warned the US that failure to comply with Karzai’s demands would be regarded as the “occupation of Afghanistan and Americans will be responsible for the consequences.”

Of course, the threatened “consequences” will leave the Dunford guessing as regards Karzai’s next move. There is no way that Karzai will urge the people to take up arms against the US and its allies. But what could be even more damaging will be a Gandhian “non-cooperation,” which could seriously derail the North Atlantic Treaty Organization’s withdrawal troop plans.  Karzai is also a master of the art of political brinkmanship.

The big question is what happens now to the US agenda to establish military bases in Afghanistan. The Afghan officials are giving confusing signals to the Americans to the effect that Karzai is in reality merely grandstanding, hoping to ride a wave of nationalism, which in turn would give him the gravitas to push through the controversial status of forces agreement formalizing the establishment of American military bases. However, it is becoming increasingly difficult to take this convoluted explanation at face value. This was also what Iraq’s Nouri al-Maliki claimed at one time before the US forces were evicted, finally, from Iraq.

Given the Iraq experience, Washington on its part has begun subtly hinting that there is nothing like free lunch and in the absence of a security pact regarding the military bases, US might also review its commitments to support Karzai’s government. Alongside there is the barely-disguised “psywar” that Karzai’s government would pack up like a house of cards if the US pulled the rug from beneath his feet.

Curiously, though, Karzai does not seem perturbed by these western threats. There is no sign of his confidence weakening, either, that the Afghans could manage on their own their affairs fine without the presence of the western troops. The weekend developments even suggest that he is pushing the envelope.

To be sure, the US will not easily let go of Afghanistan. The proposed military bases in Afghanistan are vital to the overall US regional strategies. Therefore, the US can be expected to explore the option of rallying the detractors and (non-Taliban) opponents of Karzai, especially from the erstwhile Northern Alliance groups with a view to isolate Karzai politically and to unravel the coalition that has so far provided him with an Afghan politico-military base.  This process, perhaps, has already begun, as Kerry hinted in his testimony at the US Senate hearings.

Karzai too would be anticipating that Washington would do all it can, no matter what it takes, to ensure that the next government in Kabul toes the US regional agenda, and that the US’s game plan does not visualize a role for him in Afghan leadership. Whereas, he himself probably does not visualize his political future quite that way the US has in mind in the post-2014 scenario. To be sure, an extremely complex and fluid period lies ahead in Afghan internal politics as the country edges closer to the presidential election, which is due on April 5, 2014.

Looking a bit ahead and do some crystal gazing, what happens now to this standoff between Washington and Kabul? The high probability is that it may get even uglier.  The caveat must be added, though, that the standoff can ease if the US observes certain ground rules. First and foremost, the US must stop interfering in Afghan politics in the run up to the April election next year. Karzai, evidently, hopes to remain politically “active”.

Second, Washington must leave the space for Karzai to appear that he is in command. This involves two things – no debunking him or ignoring his directives or demands regarding the conduct of the military operations, and, secondly, giving a free hand to Karzai to work out his own political future (which he is entitled to).

Third and most important, Washington cannot and should not – from a political, military or moral perspective – link its and its allies’ future commitments to help secure Afghanistan’s security and stability with the negotiation of a status of forces agreement on the US military bases on exclusively Washington’s terms. The Afghans will militate against a pact that allows US troops to enjoy immunity from local laws for any crimes committed.

The paradox, of course, is that by weakening or offending Karzai and forcing him to a corner, Washington is all but ensuring that the security pact is dead as dodo. But then, last weekend’s demonstrations and the statement by the ulema already cast doubts on the efficacy of the establishment of US military bases on Afghan soil.