Kerry and the playful AfPak frogs 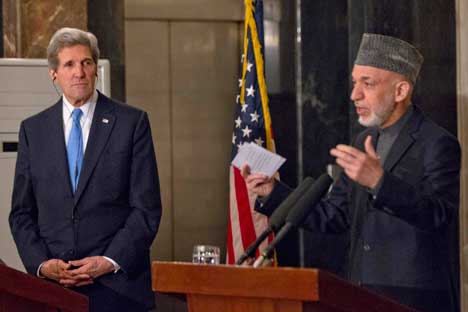 Washington’s delicate balancing act with Islamabad, Kabul and the Taliban seems to be destined for failure

Writing in the Los Angeles Times a year ago, predicting how exasperating the efforts to negotiate an Afghan settlement would turn out to be for Washington, Peter Tomsen who was President Ronald Reagan’s special envoy to the Mujahideen in the 1980s and is undoubtedly a richly experienced regional expert – he was inexplicably marginalised, though, by the late Richard Holbrooke – compared such efforts to a bazaar merchant in the Hindu Kush trying to balance the weight of frogs on opposite trays of a produce scale.

Tomsen wrote, “The merchant can load frogs on one tray. But as he begins to load the second tray, some of the frogs on the first one will inevitably jump off. And as he reloads them, frogs on the second tray will leap to the ground. Eventually, even the most determined merchant will give up.”

Tomsen’s prediction might well turn out to be the fate of the United States today in Afghanistan as time is running out and the NATO’s troop withdrawal has begun in earnest, while the peace talks with the Taliban are yet to begin with any seriousness.

In fact, the situation is even more complicated today than what Tomsen could have expected in the late 1980s when he struggled with the moody Mujahideen groups based in Peshawar. For one thing, the merchant’s basket today contains many more frogs today – and also a Big Frog, which can easily devour the small frogs in the basket if and when it chooses – at least, some of them.

The past 72 hours must have been a chastening experience for the US secretary of state John Kerry. After an unpublicised dinner meeting with the Pakistani army chief General Ashfaq Pervez Kayani at Amman on Sunday, where they apparently hit it off soldier-to-soldier and agreed on the need to quickly commence the peace talks with the Taliban at the Qatari capital of Doha, Kerry flew into Kabul the next morning on an unscheduled visit with the confidence that he had cut a deal with the Big Frog the previous night.

Kerry’s next mission was to get Afghan President Hamid Karzai on board. Karzai’s ties with the US had lately taken a nosedive with the Afghan leader even alleging “collusion” between the Americans and the Taliban.

If anyone within the US administration today has a fighting chance of mollifying Karzai, it is Kerry. Karzai, in turn, knows the secret of Kerry’s diplomatic success in Kabul; simply put, Kerry dislikes unpleasantness and by and large he concedes demands even if he didn’t mean to. In October 2009, Kerry was dispatched by President Barack Obama to persuade Karzai to back down and allow a fair and free presidential election be held so that a genuine winner can emerge, but instead ended up being persuaded that the latter rightfully deserved a second term and would be inclined to heed the US’ advice circa 2014.

Kerry’s latest visit on Monday, which was also the first since he took office as state secretary, was no exception. Thus, Karzai’s wish list has been fulfilled. Bagram prison has been handed over to the Afghan government along with the hundreds of Afghan prisoners except a small number of insurgents who the US military has blacklisted as highly dangerous militants. The US Special Forces shall also withdraw from Wardak. Besides, Kerry made up his mind to accept Karzai’s plea that the Afghan presidential election in April next year should be “Afghan-led” (meaning he will supervise it without any US interference) and he believed Karzai’s assurance that the election will be held with “transparency.”

Most important, the US has accepted Karzai’s demand that the Afghan government will lead the talks with the Taliban in Doha. Kerry and Karzai agreed that the latter would travel to Doha shortly to meet the Emir of Qatar and open an office for the Taliban in the Qatari city. Without doubt, the body language at the joint press conference between Kerry and Karzai following their talks in Kabul was terrific.

Evidently, the trophy that Kerry thought he was carrying to the Oval Office in Washington was that in return for all these concessions, Karzai would help wrap up a status of forces agreement that provides for diplomatic immunity for the US troops to be stationed in the military bases in Afghanistan beyond end-2014. Without doubt, Kerry reiterated the US commitment to safeguard the stability of Afghanistan. From Kerry’s assertive remarks, it appears that Obama may decide on maintaining a substantial troop presence in Afghanistan to deter the Taliban from making any attempt at an outright takeover in Kabul once the NATO forces departed in end-2014. After all, as an unnamed US official put it to the media, the US also has strategic interests other than the Taliban also to think about.

Suffice to say, as Kerry took off from Kabul on Monday evening, things looked real good. Kerry seemed to have sorted out virtually all the sticking points and the prospects for the status of forces agreement appeared bright. Finally, the Afghan peace talks also seemed to be getting under way in a near future in Doha.

However, no sooner than Kerry boarded the aircraft, the frogs started jumping out of the tray one after another, just as Tomsen had predicted they would. By Tomsen’s frogs-on-scales analogy, Big Frog most certainly got into action. A joint report was presented to the Pakistan Supreme Court on Tuesday in Islamabad by the premier intelligence agencies Inter Services Intelligence [ISI] and the Military Intelligence, which alleged that the Afghan government could be instigating “increased terrorist incidents” in Pakistan’s tribal areas. Curiously, the report was not a classified document despite its sensitive contents and was widely reported in the Pakistani media. At a minimum, it served the purpose of provoking Kabul.

Very soon it was mayhem. Thus, the Taliban have butted in and point blank ruled out the possibility of holding negotiations with Karzai during his upcoming visit to Qatar. To rub salt into Karzai’s wound, it has been revealed that around 25 Taliban representatives are already living in Doha but they have no plans whatsoever to meet him when he travels to Qatar. As their spokesman Zabihullah Mujahid put it, Karzai government is useless and “has no powers and cannot take decisions independently.”

Meanwhile, Kabul has alleged heavy shelling by the Pakistani military from across the border in the eastern province of Kunar through Monday and Tuesday. In protest, Kabul announced on Wednesday it was cancelling a planned visit by an eleven-member team of Afghan military officials to the Pakistani army staff college at Quetta.

Not only that, the top Afghan foreign ministry official, Deputy Foreign Minister Jawed Ludin, who is a key figure at the policymaking level, called in Reuters for an interview where he roundly condemned the Pakistani doublespeak. He virtually said that the Big Frog is creating havoc by manipulating the small frogs at its will and ensuring that the merchant never got anywhere.

Ludin disclosed that Pakistan is undercutting the Karzai and is playing off the various non-Taliban groups against each other and vis-à-vis the Taliban, thereby ensuring that the peace talks got nowhere and Afghanistan remained unstable so that it could capitalize on it once the NATO troops pulled out by end-2014.

To quote from his Reuters interview, Ludin said, "What they [Pakistan] would like is again a fragmentation of the Afghan state and going back to the drawing board so that they can have another 10 years, at least another decade, of weak, compromised Afghan state."

So, what does merchant Kerry do now? The only option is to forget about Syria for the present and to start all over again by having another dinner engagement with Kayani – say, a candle light dinner by the Nile. But Kerry should then follow it up with a quick dash to the airport straight from the dinner table through the Cairo traffic to make it to Kabul – and Doha as well. But how can he possibly rush to two cities at the same time? He possibly can’t. But then, if he cannot, that is sufficient lead-time for the Big Frog to instigate the small frogs to start jumping the tray. And state secretary Kerry has to start all over again. Tomsen’s prescient LA Times article is here.