Of fools and bad roads 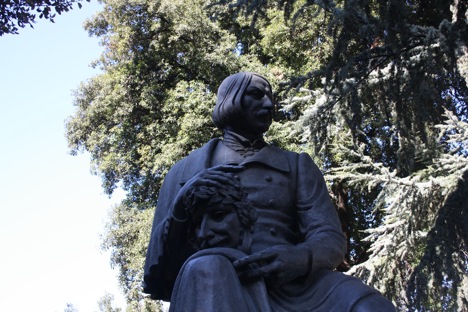 The Russian sense of humour is legendary but complex and it’s better to tread the path of caution when reacting to a certain genre of jokes.

While recently watching clips on Youtube of an incredibly funny Canadian television programme that plays pranks on people and films them and their reactions, I asked a Russian friend with experience in the entertainment industry whether she thought about trying something similar in Moscow. Her response was that the prank victims would beat up the pranksters!

The Russian sense of humour is legendary but complex. At times a few shots of vodka make even the worst jokes seem funny but a foreigner can never tell when he or she crosses the limits since Russians don’t usually make them clear. I usually tread the path of caution when I hear Russian jokes that are critical of the motherland and make sure I contain my laughter. It helps of course that many things that Russians complain of are actually worse in India.

Burmese comedians Par Par Lay, Lu Zaw and Lu Maw, known as the Moustache Brothers, have been in and out of jails for jokes that were directed against the totalitarian Burmese regime.  Something like this is unthinkable in Russia, but one of my ideas of an April Fool’s Day joke could have caused the end of my living in the country for the foreseeable future. We were planning to have a special April 1 issue of the paper I edited, where the first page would be full of April Fool’s articles. So, I wondered what would shock our readers more than a headline that  says: Russia to hand over Southern Kurils to Japan! My Russian colleagues seemed to find it funny, although this was around the time that one and a half river islands on the Amur were handed over to China as a final settlement of the boundary question. Cossack groups and many people in the Russian Far East were unhappy that “Moscow” was “surrendering territories” that were won as the result of the Great Patriotic War.  The final version of my newspaper was ready to go to print and just at that moment my publisher turned up and was horrified with what he saw. He said the intelligence agencies would not find this funny and I’d be on the next flight out of Sakhalin Island! Just in the nick of time, we changed the top joke story, which may or may not have turned into a tragic end of my special life in Russia. On the whole Russians do like to laugh at themselves, but certain areas are no-goes.

Gogol’s words that Russia’s biggest problems are “fools and bad roads” are often repeated across the length and breadth of the country. Of course, if Nicholai Gogol was alive today and visited suburban Mumbai, he wouldn’t complain about the roads in Russia and a trip to some parts of India, would make him think twice about liberally labelling people fools back home.

The word fool in itself tends to be more offensive in Russia than in many other parts of the world. I have seen enough violence over its usage to be really careful about uttering the Russian word for fool - дурак (durak). Given the alcoholism rampant in many parts of the country, дурак is also liberally used for drunken hooligans. Of course, the word is used in an endearing and affectionate way as well.

April brings warmer weather to most parts of Russia and with it more crazy people out on the streets. Many of those falling under the дурак classification are more or less harmless but it wouldn’t exactly be wise to take a midnight stroll at this time of year. This rule would apply to locals as well. A Russian colleague of mine, a gentleman by all standards, found out the hard way that walking in a shady neighbourhood in the outskirts of Moscow around 2 am had its minus points. When I saw him, days after an altercation, he had a bandage patch on his hand and was wearing sunglasses to hide two black eyes.

Along with fools, Gogol had a problem with Russian roads in the 19th century. The advent of the automobile and modern asphalted roads doesn’t seem to have changed too much in the smaller places away from Moscow. April brings about a muddy spring in the distant outposts of the country and can be a nightmare for those in the Russian Far East. This is the best month to have a good sense of humour. I don’t particularly remember laughing when a new suit of mine was splashed by a speeding car one afternoon. The fact that the water on the streets froze over at night and I ended up slipping and falling hours after being “blessed” just added insult to injury. Of course, these were situations one got used to and I did see the humour in them when they happened more often.

Russia and India represent two different kinds of messes, but there is one common trait that can make life a lot more fun in these diverse countries: A Good Sense of Humour. It’s pointless to get worked up and get a high blood pressure over situations where you’re powerless.

If you’re in Russia or India on this April Fool’s Day, laugh a lot. Some situations really are funny.