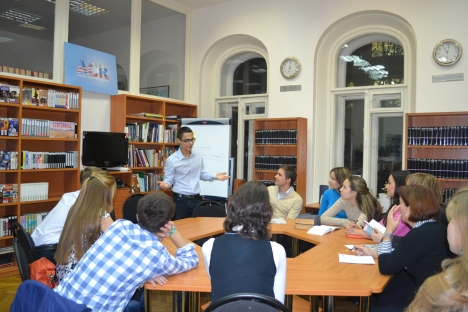 An American Corner in the city of Kazan. Source: Pavel Koshkin

While Russia struggles to improve its image abroad, the U.S. model of “soft power” sets a good example to follow.

How many cultural and educational centers does Russia have in the United States? This was the very question that preoccupied my thoughts when I first visited the American Center in Moscow in the Foreign Literature Library in 2008.

Although I didn’t find the exact answer to my question, I came up with my own ideas regarding successful soft power and the example set by the U.S. government.

When I visited the American Center in 2008, I was impressed by the array of opportunities it offered to help Russians become more familiar with American culture and education.

I read ambitious books and American daily newspapers provided by the center. Perhaps more importantly, I seized the chance to meet prominent Americans fully engaged in U.S.-Russia relations such as former Deputy Chief of Mission Eric Rubin, who lived in Moscow from 2008-2011. I also met high-profile speakers such as TV journalist John Alpert, and other American officials, artists and academics.

A variety of encounters with American students and volunteers also helped me to understand America better and refute stereotypes.  In addition, I discovered a great deal about the U.S. system of education and exchange programs.

I frequented the center and tried to attend as many lectures of American speakers as possible. Fortunately, they took the floor once per week. The more they talk, the more I wanted to know - which encouraged me to keep visiting the center.

I asked myself afterwards whether Russia could popularize its culture in the same way the U.S. does. And every time I felt a little discouraged when I thought about Russia’s soft power.

While the U.S. has established 28 American Corners and centers scattered throughout Russia, our country doesn’t seem to have nearly as many, or as active, cultural and education centers.

I tried to check it out at the website of Russia’s U.S. embassy and in Google, but found only the Russian Cultural Center in Washington, D.C.

But are there Russian cultural centers in other American cities? Do any urban other centers have at least one well-developed Russian center that gives opportunity to study the Russian culture and its system of education?

I was pleased to hear that Russian-American communities have come together in cities like Memphis, San Francisco, New York, Seattle, Detroit and Miami to create their own nonprofit cultural centers without the direct involvement of the Russian government. Even Puerto Rico has now established a cultural center for Russians and Americans. But these appear to operate only with the budgets and promotion of local communities.

All this indicates that Russia need to develop its soft power more vigorously and tenaciously to improve its image abroad. And the U.S. example –by this I mean American Corners in Russia - may be very helpful.

“Russia is celebrating the 20th anniversary of having the American Corners program,” said Sarah Ziebell, a representative of the U.S. Embassy in Moscow. “Russia is the first country where the U.S. established an American corner.”

Around the world, American Corners offer programs that fall within five main categories: providing information about the U.S.; offering cultural programs in English; English language studies; and advice about higher education in the U.S.

“We have been inviting an increasing number of  prominent American speakers, famous writers [like Michael Cunningham], journalists [like John Alpert], academics, visiting scholars,” said Kore Gleason, the coordinator of the American Center in Moscow. “We have a lot of speakers – representative of U.S. universities who speak about their programs or give workshops how to write better application packages to study in the U.S.”

Gleason also said that the Center is trying to encourage Russian experts who speak English to give presentations. In February, for example, the American Center invited leading Russian biologists to discuss wetlands in Russia for World Wetlands Day.

So why doesn’t Russia take this model as an example? Why don’t we attempt to set up more Russia cultural centers in American cities?

Russia could take into an account this experience and establish a dialogue. Yet the authorities - both American and Russian - need to step up collaboration in this field and overcome Cold War thinking.

Currently, they seem to be reluctant to establish closer ties because political and geopolitical differences hamper any attempt to overcome mutual distrust.

Alexei Arbatov, a scholar in residence at the Carnegie Endowment for International Peace in Moscow, told me that soft power remains on the periphery of the U.S.-Russia relations.

“Educational, scientific and environmental collaboration is on the periphery of U.S.-Russia relations," he told me at Spaso House, the Moscow Residence of U.S. Ambassador Michel Mcfaul, during Barack Obama’s inauguration speech.

Edward Lozansky, president of the American University in Moscow, seems to echo Arbatov’s opinion.  “Although there are few attempt to fill the gap in this field, Russia has failed to use its “soft power,” he said.

Likewise, Russian authorities are making an attempt to improve the country’s image: In 2008 they created an organization called Rossotrudnichestvo that is supposed to popularize Russia abroad.

Yet it remains to be seen whether it will be effective or not. Hopefully, it will also keep the American Corners example in mind.