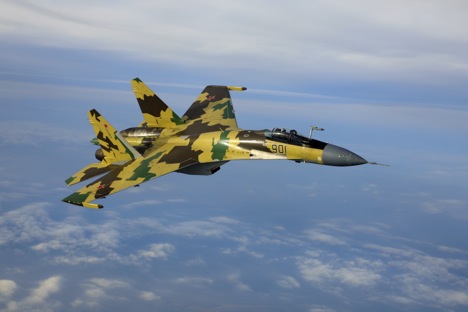 Russian pilot: "No F-35 can ever out-fly Sukhoi in knife fight." Source: Sukhoi.org

The F-35 Lighting was the first choice of the Australian air force. But several thunderbolts have struck the stealth aircraft, including the arrival of new generation Sukhois that are skewing the odds against the Australians.

Sometime by the middle of this year, Australia will have to make a stark choice. Its defences vulnerable and budget in tatters, the country will announce whether it will buy another squadron of 24 F-18 Super Hornets, or that Australia will stick with the original plan to buy 100 units of the F-35 Lightning – America’s joint strike fighter.

Trouble is neither option adds to the country’s security.

Like much of what comes spinning out of the Australian media, the article is alarmist. But it offers a sound suggestion – instead of seeking advice from Australian and American military officials, who have staked their careers on the F-35, the defence ministry must get an informed and unbiased opinion from outside. As things stand now, Australia “will soon discover that the latest defence slogan – ‘first look, first shoot, first kill’ – works against the outmoded Hornet but not against the Sukhoi. The Sukhoi is just too good”.

The article adds: “For example, the JSF can operate effectively only to a maximum of around 40,000 feet (it can fly higher but loses operational impact at higher levels). By contrast the Sukhois can operate at full capacity at much higher levels and with that advantage they have systems and weapons that could blast an Australia JSF and its pilot out of the sky before they had a chance to ‘first look, first shoot, first kill’. No dogfight required.”

The Business Spectator offers a way out of this “heads we lose, tails we lose” dilemma. It suggests Australia either acquire the F-22 or its technology. The prescription is pretty close to what much of the Australian media and defence experts have been peddling. The only problem is they are peddling snake oil. Even if it were possible to borrow technology from the F-22 (made by a different company) and graft it on to the F-35, American law prevents the export of F-22 and its technology.

A re-look at Sukhoi

So what is Australia to do? According to the independent think tank New Australia, it should consider not just the Sukhoi Flanker but in future the PAK-FA. “We recommend that Australia enter an arrangement with Sukhoi similar to HAL in India to build either the Sukhoi Su-35S Flanker or Su-32 Fullback aircraft under licence in Australia. The current preference is Su-35S,” says New Australia.

“Sukhoi licenses the manufacture of Sukhoi planes and parts in several countries including India and China. Australia could buy the entire Sukhoi aircraft and build the avionics, consumables and weaponry locally. Many companies in Russia, Asia, Israel and Europe manufacture Sukhoi components. Sukhoi is ‘open source’.”

New Australia cites a study by Air Power Australia: “In strategic terms the Su-35S is a game changer, as it robustly outclasses all competing Western fighter aircraft other than the F-22A Raptor. Deployed in significant numbers it is capable of changing the balance of power in any region where this occurs. This reality does not appear to be widely understood in most Western air forces, or Department of Defence bureaucracies.”

Australia is troubled mainly by Indonesia’s rise as a regional power, but in many circles India is also seen as a threat. This is perhaps because the antipodeans – who are sometimes more English than the queen – see India as the villain that brought down the British Empire.

In 1986, Australia made a lot of noises when India acquired its second aircraft carrier, the Virat. Again in 1998 when India tested five nuclear bombs, it withdrew its ambassador and in a fit of pique, pulled out an Indian military officer midway through his class in an Australian exchange programme.

While a string of former Australian prime ministers, led by Kevin Rudd, have taken a strong anti-India stance, there is another lobby led by the current premier Julia Gillard, who has tried to make amends.

In this backdrop, any decision on buying Russian jets will be influenced by which lobby carries the day. If India is seen as an ally, then the Australian military might look at the T-50. But if India is bracketed as a threat, that together with Indonesia’s purchases, will pave the way for the F-35. However, such a decision will send Australian’s defences and national budget into a tailspin.

Costs are clearly a concern as the F-35 is a programme that has run out of control. It is quite shockingly an aircraft that is more expensive than Australia. Yes, the programme will eventually tip over the $1.385 trillion mark, which is more than the Australian economy.

From Canberra’s point of view, each of these aircraft could end up costing US$238 million each, which is more than the price tag of US$60 million per plane when it first committed itself to the programme. Also, because the F-35 represents the latest in American defence tech, many of its parts will be off limits to Australians and will have to be flown to US bases or serviced by Americans flown in especially for the task. This will not only add to costs, it will increase down time.

Buying Sukhoi aircraft would, therefore, be a mission of mercy. New Australia says instead of buying 100 F-35s, Australia could get the job done with just 70 Sukhoi Super Flankers. And at just US$66 million per plane, it would prevent Australia’s over-stretched defence budget from snapping altogether.

Russian aircraft are designed to overcome a uniquely Russian problem – covering its vast air space with limited aircraft. The Australian landmass is 4000 km wide, and the F-35 just doesn’t have the legs to cover that distance. The Su-35 has an effective range of about 4,000 km compared with about 2,200 for the JSF. This means the JSF would require air-tanker support to operate both within and outside Australia’s boundaries.

The Su-35 is a Mach 2.4 (nearly two and half times the speed of sound) aircraft while the F-35 is limited to Mach 1.6. According to Victor M. Chepkin, the first deputy general director of NPO Saturn, the new AL-41F engines will allow Russian jets to supercruise – fly at supersonic speed for long distances. By not having to switch their afterburners on, aircraft are able to save a lot of fuel. Translation – non-supercruising fighters such as the F-35 and F-18s will be at a huge disadvantage against the Sukhois.

Stealth – Holes in the cloak

So obsessed were the aircraft’s designers with stealth that they ignored or sacrificed fighter basics such as range, payload and speed. The thinking was stealth alone would be enough to keep the JSF ahead of the pack. However, even as the Americans were perfecting stealth tech, the Russians were developing new combat techniques against it. They are now experimenting with new radar that can pick out stealth planes.

Colonel of Aviation Grigoriy “Grisha” Medved, a former Russian fighter pilot, says the worst part of the F-35 is a very hot engine – 160 Celsius hotter than standard combat jet engine exhaust. “It makes a very bright star in the sky and a long jet plume,” he says in a study for Air Power Australia.

Russia has adapted technology developed for detecting ICBM launches, to air combat fighters, says Medved. This technology enables Russian fighter pilots to see a standard fighter at about 50 km; by 2017 it will allow them to see stealth fighters at about 150 km. Because such radars are passive, the enemy will have no idea they are being watched.

In a dogfight, Medved notes an Su-35 can salvo a pair of missiles. The first, an active-radar-homing one, will force the F-35 pilot to take evasive action, exposing his beam-on radar cross section and exhausts to another (heat-seeking) shot.

Plus, with its large internal fuel load, the Su-35 can perform multiple attacks, launching missiles, turning hard to evade and then re-engaging. That is, play “cat and mouse” with the Aussies. The Sukhoi’s much better inventory of BVR (beyond visual range) missiles can then finish the job. As Medved says, “Run in for kill with R-73 or guns. No (F-35) can ever out-fly Sukhoi in knife fight.”

And, the colonel adds, with the PAK-FA coming, the F-35 “best stay home unless escorted by bigger brother.”

Whether bigger brother can accompany the F-35 is doubtful. “The cancellation of the F-22 will make Sukhoi aircraft the most capable production fighter planes available,” says New Australia. “It also marks a historic shift in air-power from the United States to Russia and the countries that use Russian defence technology.”

If you are in the Australian air force, you are on your own mate.