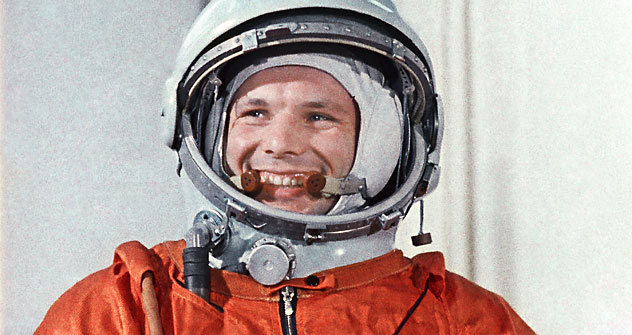 There is a sacred tradition that all Russian cosmonauts unfailingly follow before liftoff. As the bus transporting them to the launch pad approaches the rocket, the cosmonauts hop out and take a leak. Only then do they proceed towards the launch vehicle. The practice dates back to April 12, 1961, when Yuri Gagarin did precisely that, minutes before he went on to become the first human in space.

In the pantheon of cosmonauts – and astronauts – Gagarin is god. It didn’t matter that he was just 5 feet 2 inches tall, or that he travelled to space just once. Like Prometheus – in Greek mythology the first mortal to experience the warmth of fire – Gagarin discovered something novel for humans. After his epic journey the heavens, for long the realm of the gods, was open to members of the human race. In the space of 108 minutes, science fiction became scientific fact.

Dream started in a WWII dogfight

But all this nearly never happened. During World War II the Germans had occupied Gagarin’s village Klushino, Smolensk, 160 km west of Moscow. They sent his teenage siblings to slave labour camps (they did not return until the war’s end). Yuri and his brother Boris sabotaged the German garrison in Klushino. They mixed chemicals in battle tank batteries and blocked their exhaust pipes with raw potatoes. For this, the German hanged his brother Boris from a tree (although their parents rescued him before he was dead). Yuri escaped a similar fate because the Germans thought he was too young and harmless to be hanged.

During the occupation the young Gagarin witnessed a dogfight between Soviet Yak fighters and Messerschmitts. One aircraft from each side was shot down, with the Russian pilot ejecting just outside Klushino. The villagers rushed to pick up the downed pilot and brought him inside. Curious, Yuri went to look at the downed pilot and was captivated by the man’s persona. As the Russian rescue crew arrived and the injured pilot took off in another aircraft, Yuri knew what he wanted to become – a fighter pilot.

It was the right decision at the right time. Gagarin was the perfect poster boy for the Soviet space programme. He was the son of a carpenter and therefore fit perfectly with the working class hero or farm boy image the Soviets wanted to project. He was also short and was suited for the cramped interiors of the early re-entry vehicles.

The making of a superstar

Meanwhile, earthlings were awestruck by the man with the Greek god looks. Gagarin was so cussedly handsome that nobody this or that side of the Iron Curtain could match his charisma. In an era before rock stars evolved, the Russian rocked.

Gherman Titov, who narrowly failed to become the first man in space, said 59 years later that his superiors had made the right decision: “Yuri turned out to be the man that everyone loved. Me, they couldn't love. They were right to choose Yuri,” he told the authors of Starman, The Truth Behind the Legend of Yuri Gagarin.

Lev Danilkin writes in Gagarin: Man and Myth: “It is not clear exactly who first decided that on the evening following “the dawn of the space age”, Gagarin should go travelling and pay a few visits but, in any case, all the countries of the world started vying with each other to invite him to come and see them.”

After the predictable must-stops in the Soviet bloc satellites, Czechoslovakia, Poland, Hungary etc, the Russians unleashed Gagarin on England. “Naturally, it was possible to count on a warm reception – within the limits of traditional English xenophobia and snobbism,” writes Danilkin. “But to foresee that, three months after his flight, a Soviet officer would be greeted, in a foreign country that was a member of a competing military and political bloc, with almost greater enthusiasm than in his homeland? That crowds of people would wait to welcome him along the road from Heathrow and swamp him with bouquets of flowers – just as they did along Leninsky Prospect on the way from Vnukovo airport? That women would faint in ecstasy at the sight of this visiting representative of the USSR?”

The French took French leave – frightened by the prospect of having Gagarin and John F. Kennedy at the same time in Paris, France withdrew its invitation.

Japan was a mixed bad with huge throngs at the airport chanting “Good, Good Gagarin” in Russian while a small group of ultra-rightists yelled “Gagarin Go Home”.

Though living the life of a superstar, Gagarin was not used to the harsh flashlights. What saw him through this episode was his high tolerance for stress – this wasn’t surprising as he had lived through a world war and was a fighter pilot by training.

His tolerance for stress came in handy, especially in his India trip. Gagarin’s “most exhausting, essentially nightmarish, journey” was to India, during which he met Prime Minister Jawaharlal Nehru and his daughter Indira Gandhi, visited Bollywood and spoke in public 18 times a day in a temperature of 40 degrees Celsius. Gagarin says he was “sucked dry” and complained that he “never even saw any elephants in India”.

Despite his short trip, Gagarin left an indelible impression on Indians. Many a boy born that year was named Gagarin by space-struck Indian parents. To be sure, any child having the first name Gagarin must have had a lot of explaining to do during his lifetime.

Race to space: Officially over after Vostok 1

By definition a race is held just once. You can have a 100m sprint and you can win it or lose it. If you lose you can’t have a 120m race a few days later. Point is, if there was a race to space it was won by Gagarin. Or with the first satellite (Sputnik, in 1957). Or when Luna 1 became the first rocket to pass the moon in 1959. Or when Luna 3 transmitted the first photos of the dark side of the moon the same year.

Gagarin’s accomplishment still reverberates around the world. Without his audacious leap into space, NASA may not have gone for the moon shots. The Space Shuttle would have remained in the realm of science fiction.

They say the gods become jealous of extraordinary men. They did not forgive Prometheus for daring to steal their fire. Gagarin too died young. But perhaps the Soviet major couldn’t have asked for a different ending. While we will picture the likes of Neil Armstrong and John Glenn as crusty old men, Gagarin will always be seen as noble and good looking.

And as Danilkin describes him, the spaceman with sex appeal.