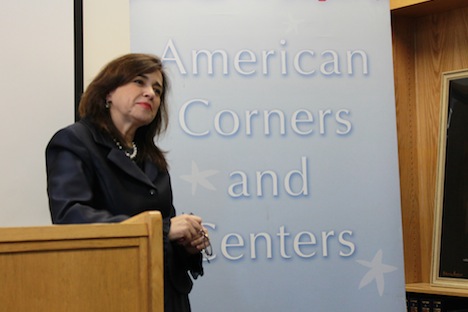 U.S. Undersecretary of State for Public Diplomacy and Public Affairs, Tara Sonenshine, pins hopes on 'soft power' as a tool to achieve mutual undertstanding between Russia and the U.S. Source: Pavel Koshkin

While the Fulbright educational program celebrated its 40th anniversary in Russia on April 10, U.S. Undersecretary of State for Public Diplomacy and Public Affairs, Tara Sonenshine, took the opportunity to drop in on the American Center in Moscow. She delivered a speech on the importance of soft power and how it can be used to cope with and minimize political differences.

How can “soft power” resolve increasing differences between the United States and Russia?  Why does “hard power” frequently overshadow its soft counterpart? What problems should we focus on to effectively use soft power?

I could not help asking myself these questions when I went to the American Center in Moscow to listen to the U.S. Undersecretary of State for Public Affairs and Public Diplomacy, Tara Sonenshine.  After all, she could address these problems and help me understand in what direction we should go.

Although I didn’t find any specific proposals, I came up with some tips that can at least contribute to establishing mutual understanding.

Sonenshine, a very eloquent speaker, talked about public service and its impact on U.S.-Russia collaboration. At the same time, during the Q&A session she raised more important issues, such as recent NGO inspections in Russian regions and unprecedented visa rejection for Russian Work and Travel applicants.

The recent cases with Work and Travel students fueled debates throughout Russian society on visas and student exchange programs, because about 80-90 percent of the Work and Travel applicants were denied U.S. visas.

At first glance, this case seems to be a good example of a certain limit to public diplomacy and instances when it cannot resolve the problem.

Russia’s reputation on the world stage at an unfair disadvantage

Indeed, how we could rhapsodize about soft power when students are prevented from entering another country where they could gain valuable cultural and educational experience.  "Does the action match the words we spelled out?" I asked myself.

Yet Sonenshine made it clear that some restrictions in the selection process are necessary to increase the efficiency of soft power and keep the situation under control.

She explained that the U.S. has to make sure everyone who is accepted into the Work and Travel program has a good experience; this means that they have had to take a more serious look at the students and the U.S. firms who hire them.

“Over time, the number of summer work-travel programs in the U.S. has gone up, up, up. And quality sometimes suffers when you grow extremely big with a number of programs,” Sonenshine said.

“Our most important priority is the security, health and well-being of people who come for a summer to travel and work,” she said.

“We have to put on some more difficult restrictions, because we were finding in some cases that we are not able to deliver the highest possible quality. Any time when an international visitor comes to the United States, it has to be a positive experience. If it is negative in any way, it is going to be hard for everyone,” she added.

When asked about the recent NGO inspections in Russia and the best way to improve their activity and encourage them to spend money more effectively, Sonenshine started articulately explaining why the U.S. has been always concerned about low human rights record in other countries.

“It has to be a robust, vibrant, nongovernmental, civil society sector,” she said. “And we want to preserve and nurture it so it can be developed freely. And this is why, when we feel there are restrictions and limitations placed on the nongovernmental part, we speak passionately with the loudest voice.  And public diplomacy operates in people-to-people space. This is why we expressed our concern – and we should express concern when we see something concerning.”

Governmental and nongovernmental tracks: This is where hard power meets soft power, I thought. Afterward, I asked Sonenshine to what extent soft power is able to tackle political differences and what we should do to avoid them.

“The differences are OK in our relationships,” she said. “As long as you can find commonalities, you can accept somebody’s differences. And when you find common issues that we have to work on together – including climate, for example, environment, and economics in global economy. But the best tools to keep what we call ‘soft power’ or ‘smart power’ are film, art, culture, sports.”

While talking about sports diplomacy, Sonenshine put emphasis on the 2014 Sochi Olympics, which may be a good tool for strengthening Russia’s soft power and improving its image abroad.  “You’ll be having the Sochi Olympics and I think you’re going to have a lot of people interested sports diplomacy and … winning.”

The more I listened to Sonenshine, the more I understood that talking about the idea of a co-existence of soft and hard powers is the favorite topic of any diplomat and public speaker. Good encouragement for action!