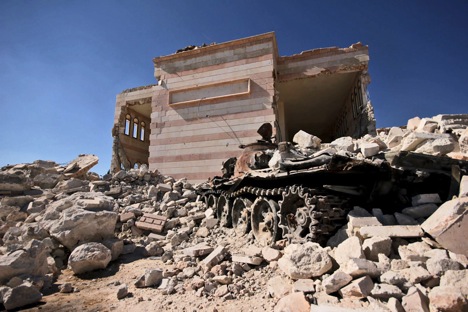 A conclusive victory over the Syrian government forces does not seem to be on the cards in a foreseeable future. Source: Spike Rogers

It seems improbable that the ‘Friend of Syria’ meet on Friday would back an outright military intervention in Syria.

The Russian Foreign Minister Sergey Lavrov’s remarks on Wednesday regarding Syria must be counted as one of the strongest ever. His warning against foreign military intervention stressed that in such an eventuality, the tragedy will continue to unfold and the outcome can only be the emergence of al-Qaeda.

These remarks have been ‘targeted’ mainly at the ‘core group’ of the FOS, which is meeting in Istanbul on Friday, where, according to the Turkish hosts, as many as ten foreign ministers would participate, including the United States Secretary of State John Kerry.

Interestingly, this will be Kerry’s third visit to Turkey in the past two months since he took over as secretary of state, signifying the Barack Obama administration’s growing frustration that its the US’s ‘rebalancing’ to Asia is getting into jeopardy unless there could be some light visible at the end of the tunnel soon enough in the Middle East.

However, the FOS meet in Istanbul is taking place against a backdrop of contrarian trends. The concerted campaign lately in the western media fanning fears of Syria’s chemical weapons, Washington’s warnings that Damascus’ use of the WMD would be a ‘red line’ that triggers a US military intervention and British scientists’ latest claim of having found evidence of Syrian chemical attack – all these are ominous trends that hark back to the elaborate hoax perpetrated in the run-up to the Anglo-American invasion of Iraq in 2003.

Of course, human memory is short and once the regime change was achieved in Baghdad, Washington and London simply forgot about Iraq’s alleged WMD stockpiles. The very same pattern of deception repeated again to justify the West’s military intervention in Libya in 2011. We are yet to see the WMD stockpiles that the West alleged Muammar Gaddafi to have kept in his hometown of Sirte.

Again, President Barack Obama has scheduled meetings with the leaders of Turkey, Qatar, Jordan and the UAE through the coming weeks. These four FOS countries are in the forefront of the push for regime change in Syria. On the other hand, arguably, these are also countries that are ‘frontline’ states in the event of a US-Iran showdown, which cannot be ruled out.

At any rate, on Wednesday Obama met the UAE’s Crown Prince of Abu Dhabi Mohammed bin Zayed Al Nahyan. The joint statement issued after the talks “reaffirmed their commitment to the strong partnership… reflecting common strategic interests.” Interestingly, the statement referred to the “close defence and security cooperation… and the deployment of interoperable US defence systems.” It mentioned the “ongoing conflict in Syria” as having figured in the talks.

By the way, UAE opened a resident mission in the NATO headquarters in Brussels this week, and is the first country to do so from the Middle East region. Meanwhile, Obama also had an unscheduled meeting on Friday with the Saudi Foreign Minister Prince Saud al-Faisal to discuss “developments in the [Middle East] region, including the conflict in Syria.”

Arab League takes a step towards full-scale war in Syria

These heightened activities on the political front are being supplemented by the regional tours next week by the US defence secretary Chuck Hagel of the Middle East, which will take him to Israel, Jordan, Egypt, Saudi Arabia and the United Arab Emirates.

Hagel disclosed in Washington this week during a Congressional hearing that the Pentagon is deploying to Jordan a 200-strong contingent of planners and specialists in intelligence, logistics and special operations. He said this contingent will provide leadership personnel who could command additional forces, if need be. The new troops form a ‘headquarters element’ of the 1st Armoured Division of the US Army. According to the Washington Post, “the dispatch of a headquarters unit indicates a higher level of preparation for a possible expanded U.S. military role, including command and control capability for a larger force.”

Hagel admitted that he authorised the deployment last week to “improve readiness and prepare for a number of scenarios.” But then, he added, “Military intervention at this point could hinder humanitarian relief operations. It could embroil the United States in a significant, lengthy and uncertain commitment.”

Kerry previewed the FOS meeting in Istanbul in remarks at the a Congressional hearing in Washington on Wednesday where he said, “The fact is that some people are providing weapons [to Syrian rebels] . . . and others are apparently about to decide to, some of our friends. The United States policy right now is that we are not providing lethal aid, but we are coordinating very, very closely with those who are and with our core group allies.”

All things taken into account, therefore, it seems improbable that the FOS meet on Friday would back an outright military intervention in Syria. On the other hand, the probability remains that the FOS will ratchet up the current threshold of covert operations directed at weakening the Syrian government forces. The intriguing question, on the other hand, is whether this will signify a pragmatic decision to put a brave face on tiptoeing toward dialogue.

Thus, the continuation of Lakhdar Brahimi as the UN-Arab League joint special representative for Syria despite the recent rumours regarding his resignation needs to be taken as a hopeful sign that although the prospects of dialogue may seem rather dim at the moment, a political solution in Syria is still possible.