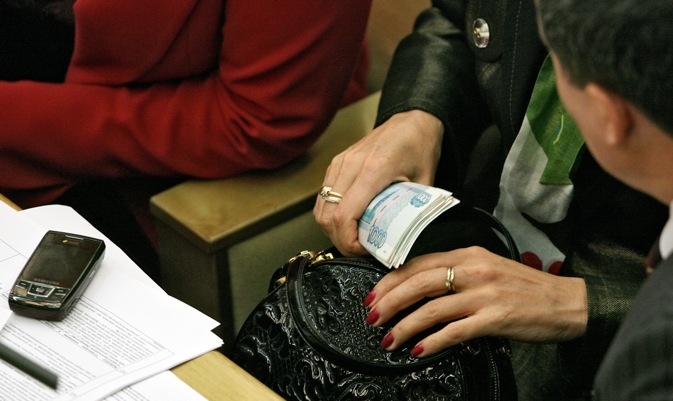 In India the initiative against corruption is coming from the bottom, in Russia from the top. Source: Kommersant

While emerging countries like India and Russia admit graft is a huge problem, in the West they tend to dismiss it as a Third World disease.

M.K. Kaw had front row seats to a particularly pernicious form of corruption. In his book “An Outsider Everywhere - Revelations by an Insider”, the civil aviation bureaucrat reveals how industrialist Ratan Tata had to back down on his plan to start an airline because Tata refused to pay bribes.

Kaw says the history of civil aviation in India is “a fascinating saga of benami (secret third party) ownership of airlines, demands for bribes, destruction of rival airlines one by one, unwarranted purchase of aircraft, mismanagement of bureaucrats and politicians, free jaunts on inaugural flights, subsidised travel for many categories of travellers, VVIP flights, Haj flights and so on”.

There is no question about it – India is soaked in corruption. Government doctors report for work hours late. Teachers don’t teach. Income tax officers become millionaires by either fleecing honest businessmen or accepting bribes from the crooked ones. Court clerks accept cold cash to move your case file to the front of the queue. It doesn’t end even when you are dead – it’s payola time all over again when your family needs a death certificate or post-mortem. Clearly, India has perfected cradle to grave corruption.

Like many projects in Russia, the 2014 Winter Olympics to be held in Sochi is a money pit. For instance, the 48-km ring road around the city has cost a whopping US$7.6 billion. According to the Russian edition of the magazine Esquire, for that amount the entire highway could have been paved with black caviar.

Russia’s anti-corruption crusaders have a new word – pekhting. Coined in June 2012 to describe the proceedings of the Duma’s ethics commission, then headed by Vladimir Pekhtin, the term became popular in February this year when Pekhtin was forced to resign his seat after revelations that he owned undeclared real estate in Florida. That’s like the fox guarding the chicken coop.

In Moscow, the public prosecutor’s office has launched an investigation against former Agriculture Minister Yelena Skrynnik, who lives in a US$ 14 million estate in France. The politician is reported to have paid for it in cash.

The source of all that liquidity sloshing around? Russia’s National Anti-Corruption Committee says the amount of bribes paid by Russians add up to $300 billion a year.

In the West, India and Russia are depicted as corrupt to the bone. In 1976 the US embassy in New Delhi noted that “corruption is not a phenomenon which was brought to India by the West,” adding, “Hindu and other religious shrines in India have long been known for their corrupt practices.”

And where did the Americans dig up this evidence? “Kautilya, the ancient philosopher, in his treatise Arthasastra refers to various kinds of corruption and prescribes corresponding punishments,” writes the learned diplomat, whoever he or she was.

Surely ancient India did not have a monopoly on corruption. It was at any rate more transparent than most civilisations – past or present. Over 2300 years ago, the Greeks who were defeated by the Indians sent an ambassador to the court of Chandragupta Maurya, the Indian emperor. Megasthenes wrote an account of his years at Patliputra, Chandragupta’s capital, which he described as one of the most efficiently run cities in the world.

Bookkeeping of every economic activity was meticulous and free from corruption – and Victorian moralising. Megasthenes writes: “The Superintendent of Prostitution looked after prostitutes, controlled their charges and expenditures, and appropriated their earnings for two days of each month.” Kautilya says it was the duty of the Chief Controller of Entertainers to ensure the income of a prostitution establishment was not reduced by the extravagance of its madam.

How the West won – with bribes

Nobody is arguing India was corruption-free before the British arrived. But the British institutionalised corruption in India because it was so common back in Britain.

In the year 1651 the British obtained an official order granting exemption from payment of custom duties. Again in 1715, another Mughal emperor in an act of irresponsible magnanimity signed a decree giving the British not just inland trading rights, but the right to keep a garrison.

The British regularly flashed forged decrees at border posts, to sneak through all manners of goods duty-free. They also illegally sold their duty-free passes to Indian traders.

J.M. Opal, associate professor at McGill University, says the collapse of Mughal rule and the onset of civil government by a for-profit British corporation made “an ideal milieu for corruption, venality, and violence”. In 1769-1770 when failed rains triggered severe hunger in Bengal, the British disrupted both the production and distribution of rice, in some cases profiting from the sudden spike in the price of calories – crisis turned into catastrophe. Several million people perished.

For sheer venality, nothing is likely to beat the corruption that blights the American justice system. In 2009 an unprecedented case of judicial fraud unfolded in Pennsylvania, where two judges pleaded guilty to taking bribes in return for placing an estimated 5000 youths in privately owned jails.

Some of the children jailed were as young as 10 and at least one killed themselves because the excessive sentences ruined their lives. Some were locked up even after probation officers recommended against it – one teenager was jailed for two years for joyriding in his parents’ car.

Corruption in the West: Hidden but huge

Corruption in the West rarely makes it to the front pages. This is because income tax officers don’t get caught accepting a briefcase full of cash in exchange for a tax write-off. You don’t have to pay a bribe in London or LA to pass a driver’s test. There are no touts at railway stations.

In the West they have long since moved to the high stakes table. Why chase measly millions when you can start a war and take home billions? American bean counters will forever argue over how many dollars were spent on the disastrous Iraq War. They may settle on US$1700 billion or US$2000 billion, but what is undeniable is that American companies walked away with at least US$138 billion.

No company has profited more from the carnage in Iraq than Halliburton, the company headed by Dick Cheney. The company was given $39.5 billion in Iraq-related contracts.

Such blatant profiteering sends out only one message to future Cheneys – even during failed wars, the merchants of death profit.

In 2012 a poll by Eurobarometer showed that 74 percent of Europeans thought corruption was a major problem in their country. The results show around 20 million bribes are paid to officials in the 18 European Union nations covered by the report. The European Commission estimates the cost of corruption is equivalent to 1 per cent of EU GDP, some US$156 billion.

Britain’s BAE Systems, the maker of the Typhoon jet, is alleged to have operated a multi-billion pound slush fund for paying bribes to members of the Saudi royal family and senior military officials. After 9/11, American prosecutors found documents to prove that some of the BAE kickbacks to the Saudis were used to bankroll at least two of the hijackers.

Former prime minister Margaret Thatcher’s son was also allegedly involved in this affair. In fact, the American prosecutors said payments were made with the knowledge and authorisation of Britain’s Ministry of Defence officials.

Return of the bottom feeders

Even as the sharks operate with impunity, the decline in incomes and wealth in the West is coinciding with a rise in corruption in strange places. Last year, a former Apple Inc manager pleaded guilty to accepting kickbacks from suppliers and manufacturers in Asia seeking contracts with the California gadget-maker.

Paul Devine, 38, who worked at Apple from 2005 to 2010, pleaded guilty to transmitting confidential Apple information to suppliers and manufacturers of Apple parts. In return, the suppliers paid Devine kickbacks, including payments determined as a percentage of the business they subsequently did with Apple.

Last year’s vast rallies in Indian cities, where the people and the government came to a Mexican standoff, is a clear sign Indians have had enough. People now prefer not to grease the palm of public servants.

In Russia an anticorruption drive last year cost Anatoly Serdyukov his job as defence minister; there is new legislation forbidding certain classes of officials from holding foreign assets; and the drive to strip Duma deputies of their immunity from prosecution has popular backing. There is also a drive to compel the elite to repatriate their overseas funds.

Political analyst Yevgeny Minchenko says President Vladimir Putin is likely to introduce major changes in the way the country is run. The first casualty – the ‘no sanctions for stealing in exchange for political loyalty’ policy.

In India, the initiative against corruption is coming from the bottom, in Russia from the top, and in the West they simply talk about it in left of centre blogs.