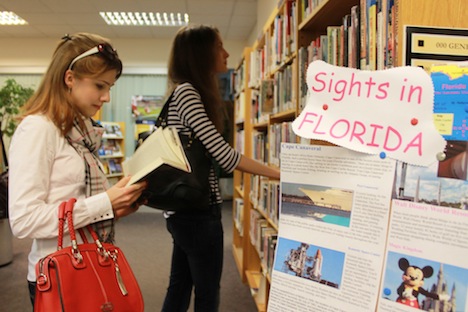 The Night in Florida festival attracted more than 100 guests in the American Center in Moscow on April 19. Source: RBTH / Pavel Koshkin

With the 500th anniversary of the discovery of Florida by the Spanish conquistadors, Russia contributed to the commemoration of this event during the Night in Florida festival that took place on April 19 at the American Center in Moscow.

Five hundred years after famous Spanish explorer Juan Ponce de León landed in Florida, Moscow residents gathered in the American Center in Russia’s Foreign Literature Library to celebrate the 500th anniversary of the discovery of this state by conquistadors.

The Night in Florida festival took place on April 19 in the American Center in Moscow (AMC) and brought together more than 100 visitors, including Russian high school and college students, professors, American volunteers and U.S. Embassy officials.

Papery flamingos and flowers stuck to the walls, palm trees made from plastic bottles, flags of different Florida universities and several exhibits about the history of the state – all these decorations allowed guests to plunge into the atmosphere of the real Florida and “taste” all its amenities.

In addition, visitors had a chance to see photos of Florida taken by Russian students who had visited the state previously and submitted their pictures for the photo contest organized by AMC coordinators.

Photos of Florida presented by Russians during the Night in Florida festival in the American Center in Moscow. Source: RBTH

“I was living in the U.S. for two years and visited Florida several times,” said Yevgenya Dudina, 27, a professor from Lomonosov Moscow State University.  “When I heard about Night in Florida at the American Center, I decided to come."

"Basically, I like the American Center, and I visit it frequently to plunge into the atmosphere of American diversity," Duduna explains. "And Night in Florida was a good reason to drop in [at the library].”

Besides this, Dudina jumped at the opportunity to present her photos of Florida and share her experience, like many other students who came to the American Center on April 19.

According to her, the Night in Florida celebration reflects the real spirit of this sunny state and helps others to understand its historical and cultural background better.

The papery palms decorations allow the AMC guests to feel the spirit and diversity of Florida. Source: RBTH

“Everything is bright and colorful here, like in Florida,” Dudina said. “Yet the real Florida offers more entertainment (like Disneyworld), while the American Center tends to focus on the educational aspect of the state,” she said after attending two lectures organized as a part of the event.

The first lecture dealt with Ernest Hemingway and his Florida experience, and the second one was about the Kennedy Space Center in Florida.

While speakers tried to shed light on American culture, literature and science, they also encouraged the Russian audience to talk about their experiences getting to know American culture and coming up with cultural cross points between the U.S. and Russia.

For example, during the lectures about Ernest Hemmingway, Tressa Weyer, a speaker and U.S. Embassy official, tried to find out why Russians like this particular writer so much and asked them to account for his popularity in the Soviet Union.

The writer’s ideas and easy literary style turned out to be the most-cited reasons for Russia’s keen interest in Hemmingway’s literary heritage.

Fortunately, there were plenty of opportunities to learn about Florida universities during the festival. An information stand and table piled with bulletins provided more than enough information about education in Florida.

Video conferences calls with Florida's 11 universities and colleges in the American Education Center in the AMC.Source: RBTH

“I want to find more information about Florida universities, because I want study there,” Yevgeny Gurov, 13, explains.

The teenager came to the American Center from the small town of Zelenograd, as a participant in a local competition for the best translation in his school. Night in Florida at the AMC was a bonus offered to him after he won the completion – and Gurov did not hesitate to come.

Likewise, 15-year old Anna Nguyen, a Russian volunteer in the American Center who contributed to decorating the library before the Night in Florida event, dreams of studying in the U.S. and tries to absorb as many cultural and educational facts as possible.

“Such events like Night in Florida give [me] the chance to fill information gaps about the U.S. and feel more confident,” said Nguyan.

Kore Gleason, the coordinator of the American Center in Moscow, believes such events like Night in Florida are essential to bringing people together, reaching mutual understanding and exposing people to a totally different culture.

“I think it is a fun opportunity to bring both Americans and Russians together – especially on the topic of Florida, sunshine and warmth.  It’s interesting for kids and adults as well,” Gleason said, pointing to a bunch of laughing children participating in games and amusements.