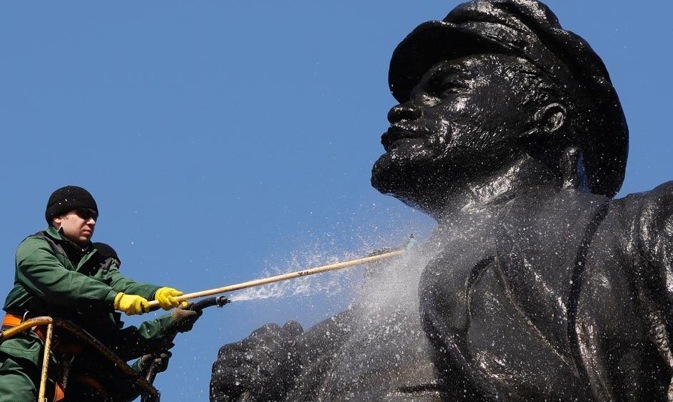 Although Lenin statues are well-maintained, the leader is largely forgotten in Russia. Source: Reuters / Ilya Naymushin

Although Vladimir Lenin’s birthday is more or less forgotten in Russia, pictures of the leader dot the landscape of the idyllic southern Indian state, which is known for its large number of communists.

It was a cold April night in Yuzhno-Sakhalinsk in 2006 and a small group gathered around the massive Vladimir Lenin statue in the city, which that time was still covered by the spring snow. A motley bunch of Russians and expats, none of whom had any communist leanings, started chanting at a candle-lit ceremony: “We hail to you, Lenin, our great leader...You are the guide and the father of the revolution...Show us the way to Moscow!” As the voices and the laughs grew louder, a couple of policemen walked towards the group and asked if they had permission for a rally. When the Lenin-admirers said no, they were told that they would be arrested. 10 minutes of negotiations later, the police let the group go, but with a sound warning. Such was the fall from grace of the man who was revered until 1991!

Almost every small town in Russia has a Lenin statue and a Lenin street but the man behind the Bolshevik Revolution is a controversial figure and forgotten at home. Very few of my friends and colleagues in Russia even remembered that April 22 is Lenin’s birthday. His mausoleum in Moscow has nothing but a handful of mostly foreign tourists on even the busiest of days and even those who loved the great leader after being fed endless pages and broadcasts from the state think of him differently after getting a bigger and broader picture.

Thousands of miles to the south of Moscow, in the lush, green and breathtakingly scenic Indian state of Kerala, several new posters of Lenin appeared overnight marking the birth anniversary. Posters of Lenin with a big smile and “creative” wordings dot the small roadside shops in the Kumarakom district. “He was a man who believed in the rights of the workers,” says a tour guide in a well-known resort by the Vembanad Lake. “But these days, communism is dead; it’s all about money you see!” Ironically, posters of Lenin and the recently-deceased Hugo Chavez seem to be the most popular in shops that sell American-branded potato chips and Coca Cola. Some of the major hotel chains have red flags outside them since the employees are part of a communist union. My tour guide argues: “We have 100 percent literacy in Kerala because of Lenin and Marx’s ideology. Look at the neighbouring industrialised capitalistic states with their poverty and gaps between rich and poor.”

At the famous tea shops and the palm toddy bars, the conversations are about communism being in danger. A man who has way too much toddy, an alcoholic drink created from the sap of a coconut tree, condemns the unfair world dominated by America! At 10 am, he steps out of the shop praising Lenin and insisting that the poor of the world need another Lenin, another revolution. These loyalists wouldn’t be the least bit interested in knowing that Russia has moved on from the days of Lenin. When I tell a sober and highly-educated Leninist of the reality of Russia, he shrugs it off and says that Russia was a power because of Lenin and is now facing the consequences of abandoning communism. “Even if Russia doesn’t love Lenin anymore, we do,” he says with a sense of pride.

The reality of the collapse of the USSR is something that Kerala seems to have to come to terms with but no one I spoke would have any criticism of the great leader. Perhaps the diehard communists in Russia who have a feeling of nostalgia for those days should consider visiting Kerala. They could share stories of the good old days over vodka and dried fish or toddy and roasted chicken.