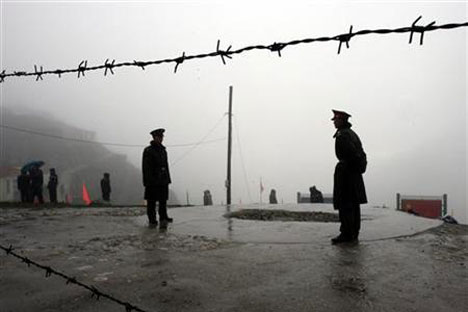 It is difficult for any incumbent government in Delhi to reach a border settlement with Beijing in the foreseeable future in a spirit of give-and-take, mutual accommodation and fairness. Source: Reuters / Vostock Photo

Fuelling India-China tensions is integral to the US’ containment strategy towards the Middle Kingdom, as it would compel Delhi to coordinate its Beijing policy with Washington’s.

The current tensions on the disputed India-China border – known delightfully for its vagueness as the ‘Line of Actual Control’ – in the western sector of the Ladakh region bordering China’s Xinjiang Autonomous Region hark back to the scenario five decades ago when little skirmishes snowballed into a major outbreak of hostility. Fortunately, however, this tem around there is a fundamental difference, too, which obviates the danger of a catastrophic slide to armed conflict.

The ominous similarities lie insofar as the public opinion in India is immature and volatile and is highly susceptible to disinformation and xenophobia; the strategic discourses are pathetically ill informed and pedestrian in their paucity or virtual absence of scientific and rational analysis; and, even more dangerously, discourses often tend to become ideologically motivated rather than distilled out of national interests or borne out of realism – so much so that the doubts arise as to whose interests such Indian pundits are serving.

On a systemic plane, there are disquieting signs that the Indian establishment has not been pulling together on the country’s China policy and this disconnect, which has been suspected through the recent past, threatens to introduce its own disharmony. In all this, however, the silver lining has been that in comparison with the surcharged pre-1962 situation, the Indian political elites have refused to be browbeaten by the polemical and rhetorical public debate or alarmist media criticism and even among the opposition parties, there are no voices that clamour for ‘police action’ against the two or three dozen Chinese soldiers who are camping on land which India claims as its territory.

The genesis of the current tensions lies in the fact that there are varying perceptions on the part of the two countries as to what constitutes the LAC. The LAC is not a demarcated line with defined geographical features, which is the case with the Line of Control with Pakistan in the disputed Kashmir region. Besides, there is added confusion stemming from the very fashion in which the LAC came into being out of the debris of the 1962 war when the Chinese forces unilaterally withdrew to a pre-determined line and left it to the Indian forces to eventually figure out where it might be.

In the entire border dispute, it has all along been the western Ladakh region that has been the real bone of contention and this continues to be so, since it is in this region that China’s vital national interests in regard of the stability and security of Xinjiang and the extremely complicated geopolitics of the region involving China, Pakistan and India – and, increasingly, the United States which became embedded as a ‘regional power’ from 2001 onward – crisscross. The dispute is compounded in no small measure by the fact that no ‘border’ as such existed in this region in the colonial era of India’s a priori history that ended in 1947, and, furthermore, since none existed, something needed to be fabricated on paper – and it was duly done by compliant historians and cartographers.

Evidently, ‘incursions’ have been endemic to the prevailing ground situation and the temptation to seize advantage on the ground or to create a fait accompli for the other side has been simply irresistible, especially at the local level on the part of elements who choose to push the envelope. Make no mistake that there is also a strong underlying current of ‘unfinished business’ of the 1962 conflict when India suffered a humiliating defeat. In sum, the present ‘incident’ needs to be seen in its complex perspective.

The Indian discourses and the media reportage, on the other hand, have lost a sense of proportions and all kinds of inflammatory theses about Chinese motivations have been propounded as expert Indian opinion. Woven into all this is the insinuation questioning the very policy premises on which Indian diplomacy has painstakingly striven to transform the relationship with China so as to undermine the very considerable progress achieved during the past one-year period.

Curiously, all this is unfolding against a rather unprecedented backdrop with Chinese Premier Li Keqiang hoping to make Delhi his first visit abroad after assuming office in Beijing, sometime in the month of May, and that too, while protocol demanded that it is his Indian counterpart’s turn to visit China first – and, as a matter of fact, despite being known to Beijing that Prime Minister Manmohan Singh could already be earmarking a visit to China in June or July.

Suffice to say, this is the latest evidence of the Chinese leadership signalling its earnestness to carry forward the positive trends that appeared in the relationship through the past one-year period. No matter Beijing’s complex motives in improving the relationship with India and making it more predictable and forward-looking – so that it can focus on its domestic preoccupations of development and reform; so that it can pay greater attention to the tensions in the relations with Japan and the United States; or, so that India keeps away from the US’ ‘pivot to Asia’ – what matters for the Indian side ought to be that this is a welcome signal that needs to be reciprocated.

But, on the contrary, the positive signal seems to upset many Indian pundits who would rather prefer to thrive on the adversarial climate in the relationship. Old hackneyed mindsets need time to adjust. This is one thing. Secondly, strong vested interests exist on the Indian side, which lack conviction in the government’s sustained bid to improve the India-China relationship. Now, how far these interest groups and fatcats are sub-serving other countries’ regional policies – wittingly or unwittingly – becomes a moot point. Alas, many Indian think tankers and sections of the corporate media have come under heavy American influence in the recent decade and many opinion makers today have virtually built successful careers by propagating the US regional policies.

Clearly, fuelling India-China tensions is integral to the US’ containment strategy towards China, as it would compel Delhi to coordinate its China policy with Washington’s and would give a sense of urgency to the strengthening of military-to-military cooperation and ‘inter-operability’ between the Indian and US armed forces. From the US perspective, understandably enough, the normalisation of India-China relations threatens to weaken or debilitate its entire ‘rebalancing’ strategy in Asia. The spectre that haunts the ‘New American Century’ is the emergence of an Asian concord or unity as regards the issues stability, security and development among the regional states of which China and India are indeed two crucially important protagonists.

Reassessing the Soviet stand on the Indo-China conflict

A leap of faith in India-China ties

The present Indian leadership has been clear-headed about the imperatives of sustaining a positive momentum in the relations with China and refused the invitation from Washington for India to act as a ‘lynchpin’ in the US’ rebalancing strategy. A close study of the statements emanating from Delhi and Beijing at the governmental level during the past few days of tensions would indicate that a critical mass of mutual trust and confidence may have already begun accruing in the bilateral exchanges at the political and diplomatic level.

Both capitals have maintained an air of reasonableness and restraint and been counselling patient discussions to resolve the border tensions by availing of the existing mechanism at the local level or through the diplomatic channel. The Indian external affairs minister Salman Khurshid has announced his intention to proceed with the planned visit to Beijing on May 9 despite the prevailing tensions at the border. Prime Minister Manmohan Singh took note of the tensions as a “localised problem.” He said, “We do not want to accentuate the situation… We do believe that it is possible to resolve this.” Interestingly, Beijing lost no time on a Sunday to welcome Manmohan Singh’s conciliatory approach advocating calm reasoning and expressed readiness “to work together with India.”

Of course, a lasting solution to such eruption of tensions can be found only through a permanent settlement of the border dispute. But the present acrimonious discourse also underscores how difficult it is for any incumbent government in Delhi to reach a border settlement with Beijing in the foreseeable future in a spirit of give-and-take, mutual accommodation and fairness.

The sad part is that the country cannot afford tensions with its neighbours when its grand strategy ought to be to create an external environment in which the formidable challenges of growth and development could be addressed and the massive problem of poverty could be tackled within a conceivable future.